The Powerwall, launched last week by Tesla chief executive officer Elon Musk, is designed to allow homeowners to store electricity generated by solar panels during the day, then use it at other times when the sun is not shining but electricity consumption is higher.

In Canada, however, that is not likely to be the main application.

That's because most solar electricity generated by Canadian homeowners' rooftop panels is sold into the power grid through Ontario's "feed-in tariff" system. There is no incentive to save the power for personal uses, because homeowners get high prices for the electricity they deliver.

Still, Ms. Verschuren said, there are other applications here where it would be useful, including providing backup power during power outages, and time-shifting so people can buy electricity at times of the day when it is cheap then use it at times when it is expensive.

Some people who want to get entirely off the grid with a solar system may also want to buy the batteries, she said.

But it is the beautiful design and simple function of the battery that is crucial to marketing the product, Ms. Verschuren said. "The image of a battery is that they are ugly," but Mr. Musk has "brilliantly" turned it into a good-looking consumer product, she said.

Test units of the Powerwall will be installed in Canada later this year and commercial sales will begin early in 2016. Ms. Verschuren said she expects to sell "tens of thousands" of the units over the next five years.

Ms. Vershuren ran Home Depot Canada from 1996 to 2011, and led the parent company's expansion into China. She is now chairman and CEO of NRStor, a company that is trying to commercialize energy storage systems.

The sleek-looking Powerwall, a rechargeable lithium ion battery, comes in two versions. The seven-kilowatt-hour model will be priced at $3,000 (U.S.) in the United States, while the 10-kwh unit will cost $3,500. That doesn't include installation, or the price of an inverter to convert power from direct to alternating current. Pricing in Canada has not yet been worked out, Ms. Verschuren said.

Each Powerwall unit weighs about 100 kilograms and is designed to hang on a wall.

Mr. Musk said the new battery is a step toward getting homeowners completely off the electricity grid, by allowing them to generate and store their own power.

Critics have pointed out that the relatively low capacity of these batteries means that most households would not be able to store enough power to run all their lights and appliances, unless they had several units in place. And there are competitive battery systems, although they don't have the modern look of the Tesla units.

Some of the Powerwall batteries have already been installed in California, and there will be a broader rollout later this year. Tesla is also planning a big international push as well.

Tesla said it will make the batteries at its car plant in California, but will eventually manufacture them at a planned "gigafactory" in Nevada.

A bigger version of the Powerwall, called the Powerpack, has been designed for commercial applications, or for utilities to store electricity. It comes in large units that can be installed in clusters. Ms. Verschuren said her company will also be selling those devices in Canada. 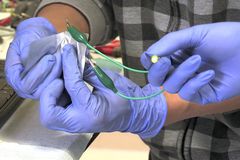