"Drill, baby, drill" has been replaced by "Frack, baby, frack."

That's supposed to be good for the planet, because fracking – the hydraulic fracturing of rock formations such as shale – releases great dollops of gas, whose carbon content is about half of that of oil. So bring it on. Electricity plants, cars, trucks and furnaces fed by gas should bring down carbon-dioxide emissions, preventing humanity from burning alive as global temperatures rise.

Or so we are led to believe.

The terms "shale gas" and "revolution" are often used in the same sentence and there is no doubt the gas is reshaping the U.S. and global energy markets. In 2000, shale gas provided only 1 per cent of U.S. gas production. A decade later, the figure was close to 20 per cent and some analysts think it will reach 40 per cent to 50 per cent by 2035.

Europe is on the verge of a similar revolution. Britain is writing the regulatory regime that will bring shale gas into its energy mix and when it does, France, under a fracking moratorium, surely won't be far behind. Poland has vast quantities of shale gas, too.

Shale gas producers and lobbyists in North America and Europe tout the economic and environmental benefits of shale gas as if it were the greatest thing since spray cheese. They are not entirely wrong. The U.S. carbon footprint is a little bit smaller than it was a few years ago because coal-burning generating plants are giving way (albeit slowly) to gas burners as the gas glut brings prices down.

Its use in transportation is the next big market. FedEx has said that almost a third of its U.S. long-distance trucking fleet will be powered by compressed or liquefied natural gas within a decade. Fiat, the Italian car maker that controls Chrysler, decided years ago that natural gas-powered vehicles would have a brighter future than electric ones. It was right.

But before we declare the shale gas revolution a net positive for the planet, consider that gas is still a carbon-intensive fuel. If the market works as it normally does, the enormous supplies and falling prices will make the fuel irresistible to the electricity-generation and transportation industries in the regions where shale gas is plentiful.

Conservation would go out the window. So might the use of renewable energy such as wind, solar and biomass power, and emission-free nuclear reactors. At the same time, regions without cheap gas, such as China, will continue to rely on coal. The shale gas surge could easily translate into greater overall carbon emissions in spite of gas's lower carbon content.

The plunge in gas prices, at least in the United States, has been astounding. In May, the producer price index for natural gas had fallen almost 57 per cent between 2007 and 2012. Gas production rose 25 per cent.

It's an open question whether the price will keep falling, since low hydrocarbon prices typically translate into less drilling. Still, gas is a bargain compared with other hydrocarbons and will find new markets. That's the point: There is so much of it around, it has to be burned. Indeed, domestic U.S. gas consumption increased by 9.4 per cent between 2008 and 2012.

Fuels compete with one another, so it should come as no surprise that the gas glut has translated into lower global coal prices. This is making coal more attractive in countries whose own gas production is nil or small, such as Britain. At last count, Britain produced 40 per cent of its electricity by burning coal, the highest level since 1996. An April report on shale gas by the British House of Commons energy and climate change committee said: "We concluded that although development of shale gas in the U.S. has reduced America's greenhouse [gas] emission this may have been offset by increased use of coal in Europe."

Just as the gas glut in some parts of the world will make coal more attractive in others, it can only make renewable energy less attractive. Renewable energy is already in trouble as austerity-mad governments roll back clean-energy subsidies (in the form of above-market prices paid for supplies) to solar- and wind-generation projects. With shale gas about to hit Europe, their future looks particularly bleak. The Tyndall Centre for Climate Change Research, a research group partnered with some of Britain's top universities, estimated that the arrival of shale gas in Britain could eliminate between £19-billion ($30-billion) and £31-billion of investment in renewable energy.

The dash for gas looks good on paper. But textbook economics – more gas use, more coal use in some areas, less use of renewables – threaten to remove its overall benefits. The British committee acknowledged as much, even as the country tries to mimic the U.S. gas revolution. Perversely, the rise in gas-fired electricity generation, driven by shale gas, "could make it more difficult for the U.K. to meet its climate change obligations," it said.

OPEC puts on a brave face as it eyes North America
Subscriber content
May 31, 2013 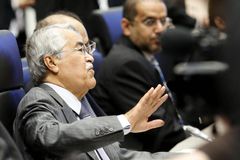