The drilling rigs puncture the horizons and tuck into the valleys of the bald North Dakota landscape. Their steel towers have taken root on a tableau of badlands and treeless plains that extends for more than 100 kilometres.

They are like steeples in the French countryside, erected in ever greater numbers, more every month, by an industry whose only deity is oil. Near many are the flares, the votive candles of the hydrocarbon age, where natural gas not worth enough to save is burned in enormous fireballs, some the size of small cars, so brilliant they blind drivers at night.

Cutting through it all are the roads – paved, gravel, red rock – that carry the rumbling parade of trucks, some burdened with supplies for the rigs, others with the oil they have prodded from the earth.

This is the place the energy companies call the Bakken, an oil play that has erupted across a forgotten corner of the U.S. It is a frenzy of drilling and pumping and moneymaking. It is also a place where a new energy future is emerging, one that holds the promise of ending U.S. dependence on overseas oil and kick-starting the country's stagnant economy. Government estimates suggest it could yield 4.3 billion barrels of oil. One industry estimate is five times higher, which would mean the Bakken alone could hold as much recoverable oil as the rest of the country. And it's just the beginning.

The flares lit in the Bakken, a so-called "tight oil" play enabled by a revolution in drilling technology, are spreading rapidly across the continent. Suddenly, geologists and drillers are discovering that what works in the Bakken works in a lot of other places, too, bringing forth sudden new volumes of oil – and optimism that there will be much more – in Texas, in Utah, in Ohio, in Saskatchewan and in Alberta. In all, 14 places are being explored for tight oil.

All those drills turning in all those places have sweeping ramifications for North America.

The Bakken and its followers have fundamentally altered the energy outlook for the continent. If energy consultant IHS CERA is right, in the span of merely one decade, tight oil wells will pump more oil than the entire oil sands. The growth is so globally significant that the firm has reduced its 2020 world oil price estimate down from $120 to $100 (U.S.) a barrel. And it's begun contemplating possibilities that would have been considered insane only a few years ago.

Tight oil also stands to have a substantial economic impact. The enormous cost of drilling tens of thousands of wells – which can run $10-million (U.S.) each, not including the cost of acquiring land – will pour hundreds of billions into domestic wages and manufacturing. The fact that Americans will be buying U.S. gas at the pumps will also have a meaningful impact on the dollars the country sends abroad every year.

"There might be some possibility that we could ... pretty much reduce our oil imports to zero," said Leta Smith, director of oil and gas supply outlooks with IHS CERA. "That's a really optimistic case. And that's not what we're forecasting right now. But still, it's an interesting question to postulate."

The sun that shines on the Bakken, it seems, is shining on America itself.

But clouding the outlook is a substantial degree of uncertainty. For one, the entire Bakken play is so new that it's difficult, if not impossible, to predict how much oil will ultimately come from a well. Bakken wells are volcanoes: they briefly shoot out a tremendous quantity of oil, then quickly slow. A well that produces 1,000 barrels a day in the first 30 days – they start anywhere from 300 to more than 1,000 – is unlikely to produce much more than 150 barrels a day 12 months later.

In addition, tight oil can only be produced using hydraulic fracturing, a technology that has, in some areas, fouled drinking water, raising concerns about its safety. Restrictions on fracturing – which was found this month to have damaged drinking water in Wyoming – would substantially alter expectations for oil production.

The other uncertainty involves just how well the Bakken wildfire will spread. It's already having a major impact in places like the Eagle Ford play in Texas, where the oil flow has doubled this year from 80,000 barrels a day in January. But how much oil will companies squeeze out of the Niobrara in Colorado, Utah and Wyoming? Or the Monterrey in California? Or the Utica in Ohio?

It is far too soon to know.

"Pinning down true, hard numbers on how big this can be is tough, given, for instance, with the Utica you've got four or five press-released wells, and that's it," said Hill Vaden, a senior analyst with upstream research at Wood Mackenzie. "But it's another one that could really change things."

Those factors have led to a tremendous divergence in expectations. The International Energy Agency, in its 2011 outlook, sees the Bakken stalling out just past 600,000 barrels a day, and tight oil across the entire U.S. producing some 1.4 million barrels a day by 2020, with declines coming shortly thereafter. Others predict the Bakken alone will near those levels. Wood Mackenzie, for example, expects Bakken output to exceed 750,000 barrels a day by 2015. Others see it cresting the million-barrel mark.

What's clear, however, is that the Bakken portends important change.

Today, the U.S. imports 9.2 million barrels a day of oil – two million of that from Canada, 4.9 million from OPEC countries. In the next 10 to 15 years, tight oil may supply an extra 3.5 million barrels a day, according to IHS CERA – although estimates on this vary broadly. The oil sands, if pipelines like TransCanada Corp.'s Keystone XL are approved, can pour out an additional 1.2 million barrels a day. And tightening fuel efficiency standards in the U.S., where the Obama administration has proposed rules requiring new cars to average 50 miles per gallon (4.7 litres per 100 kilometres), could drop annual demand by nearly three million barrels.

By those estimates, weaning the U.S. off OPEC crude seems possible. Analysis by Dallas consulting engineers Turner, Mason & Co. suggests that by 2014 or 2015, the massive Gulf Coast refinery complex will no longer need to import light sweet crude from places like Saudi Arabia. By 2020, that part of the U.S. could be completely off Middle Eastern crude.

That possibility has major foreign-policy ramifications in a country whose oil interests have often had important military and diplomatic consequences.

Harold Hamm, the billionaire chief executive of Continental Resources Inc. , which holds the largest Bakken land position and is among its most bullish promoters, has said it is ushering in "a new era in the American oil industry."

"We can be the Saudi Arabia of oil and natural gas in the 21st century," Mr. Hamm said. 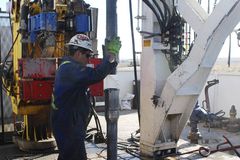