Suncor said the mine is still on track to start production by the end of the year, but chief executive officer Steve Williams said Thursday that Total had chosen not to approve or provide additional funds for the project, sparking a commercial dispute between the companies.

Separately, Total chief financial officer Patrick de La Chevardière said on a conference call the company was not prepared to accept a substantial cost increase at the project.

Subscribers: The Fort Hills gamble: Will a $15-billion bet pay off?

"It could be that they're just fed up," said Rob Bedin, analyst at RS Energy Group in Calgary.

The dispute adds to uneasiness over the competitiveness of Alberta's dominant oil sands industry. Megaprojects such as Fort Hills were among the biggest casualties as companies cut budgets and staff to cope with the collapse in crude prices from more than $100 (U.S.) in barrel in 2014 to about half that level today.

The downturn has also prompted a hasty retreat from the sector, with nearly $30-billion (Canadian) in bitumen assets changing hands this year. Global oil majors have decamped for prospects that offer better returns more quickly, such as the Permian shale in Texas.

Fort Hills, due to pump 194,000 barrels a day at full capacity, is one of only two mining megaprojects in Northern Alberta to survive intact, alongside Canadian Natural Resources Ltd.'s expanding Horizon complex.

Nevertheless, the Suncor-led development has faced cost pressures and questions about its economics as oil prices fell. Earlier this year, Suncor said the price tag could jump to $17-billion as a result of construction delays and design changes, following wildfires last year during which work on the project was temporarily suspended.

French oil major Total has already pared its interest in the mine to 29.2-per-cent and openly mulled selling a further stake. Suncor, the operator, controls 50.8 per cent, with Teck Resources Ltd. owning the remaining 20-per-cent stake. Teck directed questions about the spat to Suncor.

Mr. Williams on Thursday played down the dispute, emphasizing the hefty spending on the project is largely complete and construction on major components close to finished. He declined repeatedly to elaborate on the disagreement, but suggested that Total has been examining a possible sale.

"We know that they have been looking at various strategies, but in this case, this is a commercial discussion between ourselves and Total," he told analysts on a conference call.

Total did not respond to further questions.

Suncor called attention to the spat one day after raising its 2017 budget by 10 per cent to $5.5-billion, an increase it attributed, in part, to a more aggressive construction schedule at the sprawling development. Mr. Williams said next year's budget would drop by a corresponding amount.

The move suggests the project was at risk of missing a much-touted year-end target for starting production, Mr. Bedin at RS Energy said. "Both parties and Teck have got massive amounts of money tied up in this thing. The last thing any of them want to see is a delay," he said.

In the second quarter, Suncor said net earnings were $435-million or 26 cents a share, versus a year-ago loss of $735-million or 46 cents.

The Calgary-based company kept its production target for the year but chopped its share of expected output at the Syncrude Canada Ltd. bitumen mining and upgrading project by 3.5 per cent to a forecast range of 130,000 to 145,000 barrels a day.

Production at the 350,000-barrel-a-day Syncrude project was hampered for much of the period while the company works to repair damage from a fire that tore through the facility in March.

Suncor said it would return to normal operating rates by early August; it had previously targeted mid-July. Following recent deals, the company is the largest owner of the Syncrude joint venture with a 54-per-cent stake. The other owners are Imperial Oil Ltd., China Petroleum & Chemical Corp., CNOOC Ltd. and Mocal Energy.

The Fort Hills gamble: Will a $15-billion bet pay off?
Subscriber content
January 27, 2017 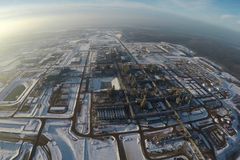