The Ontario Energy Board (OEB) wrapped up its hearings Tuesday into TransCanada Corp.'s proposed $12-billion Energy East pipeline, as the provincial government considers whether to play a spoiler role in Alberta's effort to reach new domestic and foreign markets for its growing crude production.

As it travelled along the proposed route through northern and eastern Ontario, the board heard public concerns that the crude pipeline threatens rural drinking water sources and will drive up Canada's greenhouse gas emissions by enabling oil sands expansion. However, supporters, including representatives of the pipefitters' union, endorsed its job creation potential and played down the risks.

At a hearing in Stittsville, a village that was incorporated into Ottawa, several environmental groups and local residents challenged TransCanada's contention that the pipeline offered significant benefits with little risk. Several people called on Ontario Premier Kathleen Wynne to oppose the project and do everything in her power to block it, while others urged the province to ensure local communities get substantial financial benefits to compensate for the risk of contamination from spills.

The province has no jurisdiction to approve or reject the pipeline, the OEB's Aleck Dadson told the crowd of 150 people crammed into a Stittsville community centre on a rainy Monday night.

However, the Liberal government ordered the OEB hearings and will use its report as a basis for its intervention in the National Energy Board (NEB) review. While the federal government has ultimate authority over pipeline approvals, the provinces can create troublesome political hurdles to a project that will pass through hundreds of municipalities and aboriginal communities.

TransCanada expects to file an application this summer for the project that will link Alberta's oil producers with refineries and export terminals in Quebec and New Brunswick. It is a project that has been lauded as a nation-builder by former Alberta premier Alison Redford, New Brunswick Premier David Alward and Prime Minister Stephen Harper. From Alberta to the Ontario-Quebec border, TransCanada will transform a portion of its natural gas line to carry crude, and will build new pipe through Quebec and New Brunswick.

For TransCanada, the OEB hearings echoed similar sessions that were held along the proposed route of its long-stalled Keystone XL project to the U.S. Gulf Coast as opponents – both local and well-organized activist groups – raised alarms about its potential environmental impacts.

"The risks of this project clearly outweigh whatever benefits TransCanada claims," said Andrea Hardin-Donohue, a campaigner for the Council of Canadians, a non-profit advocacy group. She said the pipeline poses risks to the Rideau River and its adjacent Rideau Canal, a UNESCO world heritage site as well as several aquifers that provide drinking water to rural communities.

"We firmly believe the right decision is to stop the Energy East pipeline," she said to enthusiastic applause.

Several students from Carleton University urged the energy board to focus on climate change issues, arguing that the 1.1-million barrel-a-day pipeline will enable expansion of the oil sands, which is among the most carbon-intensive sources of crude in the world. Noting that the climate issue has often been neglected by the NEB, Carleton law professor Joel Harden said the pipeline represents a 40-year investment in a fossil fuel economy, even as the world must move to low-carbon future.

However, there were supporters in the crowd. Retired engineer David Saint said he lived less than a kilometre from the pipeline and was "quite happy" to see TransCanada convert it from gas to oil. He said the country – and Ontario – needs more investment in resource development to fuel the economy.

Several representatives of the Canadian Association of Petroleum Producers and TransCanada itself – as well as the Ontario Ministry of Energy – attended the Stittsville session.

TransCanada spokesman Phillipe Cannon said he had confidence that the Ontario Energy Board will not only listen to the project's critics, but to supporters and expert consultants that it has hired to advise on pipeline safety and environmental impacts. Mr. Cannon argued that the critics repeated a lot of "myths" about the risks of the pipeline.

"We're not getting into a project of this magnitude to cut corners on security and have an incident that would jeopardize not only this project but others we might have down the line," Mr. Cannon said. 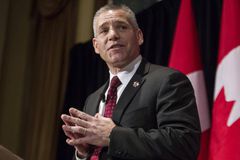 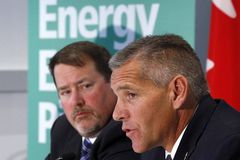 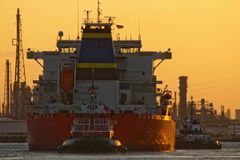