The day after TransCanada Corp. requested a pause in the U.S. presidential permitting process for its beleaguered Keystone XL project, the White House has signalled its displeasure – with a spokesman suggesting the gambit by the Canadian pipeline company is "unusual" and a political calculation.

TransCanada asked the United States government on Monday to suspend consideration of its bid to build the $8-billion (U.S.) pipeline, which would transport Alberta oil sands crude across the continent to Gulf Coast refineries, until after a Nebraska state review process is complete.

The request by TransCanada was viewed in some quarters as a last-gasp effort to salvage a doomed project and by others as a strategic move to keep the pipeline to Texas alive. Keystone XL has become a symbol in the larger American debate over climate change, and it is widely expected that U.S. President Barack Obama will reject the pipeline before he leaves office in January, 2017. The company's pause request, if accepted, could kick the can down the road to the next president.

But whether the request will be entertained is a major question mark. On Tuesday, the U.S. State Department gave an initial response, saying it will continue its review of the proposed Keystone XL pipeline while considering TransCanada's request for a pause. White House spokesman Josh Earnest told reporters that the TransCanada request "seems unusual" and that "there's reason to believe there may be politics at play here. … We believe the decision should be made by the experts who are evaluating this project."

Opponents argue the 830,000-barrel-per-day project will lead to an increase in greenhouse gases by providing a direct route to U.S. refineries for Canada's energy-intensive oil sands. Supporters say the project is the safest, most efficient way to ship a widely used product, and Keystone XL in itself is not going to contribute significantly to greenhouse gas emissions. Prime-minister-designate Justin Trudeau has argued that the Conservative government's lobbying efforts in favour of Keystone – without a strong Canadian climate-change policy – hindered, not helped, the project. While Mr. Trudeau supports the project, he is not expected to be a vocal cheerleader for its completion.

In reporting TransCanada's third-quarter earnings Tuesday, chief executive Russ Girling insisted the company is trying to stay out of the political fray.

"We believe that a pause to resolve the Nebraska route gives the best opportunity to achieve overall approval for the project," Mr. Girling said. TransCanada has already spent $2.4-billion trying to complete the pipeline.

"We've worked very hard for seven years to keep our head down and work our way through every twist and turn," he said of the pipeline first envisioned in 2008. "It's our view that the State Department process should not continue at the current time, on its current path, if there's new information that's going to be provided from a new review in Nebraska."

But Jeffrey Phillips, managing director of the consulting firm Dawson Strategic, said the White House was likely signalling Tuesday that it will reject the request for a pause.

"I do think there's more than a hint of desperation in this move," Mr. Phillips said of TransCanada's letter to the State Department.

"TransCanada Corp. is at a juncture where they have to put all options on the table, including asking for a delay in the very process that they've been pushing and wanting to see progress in for a long time," he said. "That can really only mean one thing – that they're looking at the writing on the wall, that they're expecting a likely rejection from President Obama and this is where a maybe is better than a no."

While Republicans favour building Keystone XL, Democratic presidential candidates, including front-runner Hillary Clinton, are against it. This week, Ms. Clinton's chief Democratic opponent, Bernie Sanders, summed up U.S. opposition to the project, tweeting: "It's a fundamental litmus test of your commitment to battle climate change."

Canadian Chamber of Commerce chief executive Perrin Beatty said given the highly charged political atmosphere in the United States, TransCanada is right to ask that the process be put on hold.

"It's a strategic decision they've made, and probably a wise one as well," Mr. Beatty said. "The project has become so mired in U.S. politics that to get some fair consideration of it might require pushing the reset button."

The company also said Tuesday it is "very close" to making an announcement on the new location of a terminal facility in Quebec for its Energy East pipeline. In April, TransCanada called off its plans to build a marine terminal at Cacouna, Que., in part because of concern for beluga whales near the site.

Net income for the pipeline and power generation company dropped to $402-million from $457-million in the third quarter last year. TransCanada said it will be able to continue to grow the dividend at an annual rate of 8 to 10 per cent through 2017.

With reports from Paul Koring in Washington and The Canadian Press

Editor's Note: A paragraph on TransCanada and its profitability has been removed from a previously published version of this story. 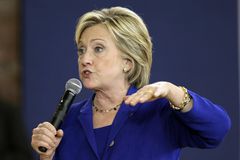