New Brunswick Premier Brian Gallant urged TransCanada Corp. to carry on with its plan to construct the $15.7-billion Energy East pipeline as a former provincial premier, Frank McKenna, complained on Friday about a "breakdown in Canadian federalism."

New Brunswick's political leaders have long championed the pipeline, which would carry 1.1-million barrels a day of Western crude to Eastern markets, including the Irving Oil Ltd. refinery and export terminal in Saint John. The economically struggling Atlantic province was counting on thousands of construction jobs, although the project would create relatively few permanent positions there.

Calgary-based TransCanada on Thursday asked the National Energy Board to suspend its review of the proposed west-to-east pipeline to give the company time to assess new rules issued by the board, which would require an assessment of all greenhouse gas emissions related to the production and consumptions of crude used to fill the pipeline. The NEB review would also include an assessment of how Canada's carbon taxes and other climate-change regulations would impact the need for the pipeline.

TransCanada's decision, which was widely applauded by environmental groups, raised concerns among pipeline supporters that the project is essentially dead – killed off by the Liberal government's environmental policies that, they say, are hurting the oil and gas sector.

In a statement on Friday, the regulatory agency said it will grant TransCanada's request for a 30-day suspension.

The suspension of the NEB review "is not good news for those who want to see that pipeline built. Our government falls in that camp," Mr. Gallant said in a statement.

"We support the construction of the Energy East pipeline from Alberta to Saint John as it would help create thousands of jobs in New Brunswick and help grow the Canadian economy."

He urged TransCanada to proceed with the review, and said he has been seeking assurances from Ottawa that the environmental assessment will be conducted fairly.

Mr. McKenna – who served for a decade as premier until 1997 – was an active participant in the effort to bring together the Irving Oil and New Brunswick interests with TransCanada and Alberta's oil producers.

"I'm disappointed," he said in an interview on Friday. "I think this is not just a pipeline issue now, this is breakdown in Canadian federalism … The government of Canada has really chosen this pipeline project as a proxy for the debate as to whether we should be a carbon-producing country."

He said the federal government was clearly swayed by "the aggressive rhetoric" out of Quebec that the pipeline would not be built through the province.

"This is supposed to be a country but this is a case where federalism is not working for us [New Brunswickers], and it's not working for the West, either," said Mr. McKenna, who now serves as deputy chairman for the Toronto-Dominion Bank.

Since the drop in crude prices and slowdown in oil sands growth, there have been growing questions whether Energy East will be needed.

There are currently three pipeline expansions that have approvals from either the Canadian or U.S. governments or both, though each faces challenges from local opponents and state and provincial governments.

TransCanada is looking to confirm shipper support for its Keystone XL project, which would deliver 830,000 b/d to the U.S. Gulf Coast. In addition, Kinder Morgan Inc. proposes to add 590,000 b/d of pipeline capacity to its Trans Mountain line to Vancouver, while Enbridge Inc. is planning to boost its Line 3 route to the U.S. Midwest by 370,000 b/d.

All told, those three projects would add nearly 1.8-million b/d of export capacity within a few years, while the Canadian Association of Petroleum Producers forecasts Western Canadian crude output will grow by 1.5-million b/d by 2030. And that CAPP production projection is likely optimistic if prices remain in a prolonged slump.

Mr. McKenna insisted the project is still needed, as it will deliver crude to new markets and help ease the dependence on the United States as an export destination. That reliance on U.S. markets has created significant discounts for western Canadian crude in the past and could do so again, he said.

It would also reduce the dependence of eastern Canadian refineries on imported crude, he said.

In May, Canada imported an average of 692,000 b/d of crude, mostly to refineries in New Brunswick and Quebec. 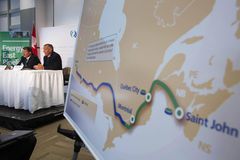 Even if you don’t build pipelines, they will come Subscriber content
August 22, 2017 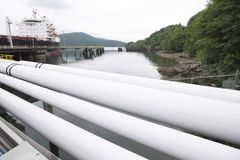