Canadian drivers may think that TransCanada Corp.'s Energy East pipeline, which will allow Alberta to ramp up oil sands production while boosting the flow of oil to eastern Canada, will translate into lower pump prices. Think again.

By connecting land-locked oil deposits in Alberta and North Dakota with world markets, pipelines and railways aren't just letting industry pull more oil out of the ground – they're also connecting those oil flows to world prices. That's something this continent hasn't seen much of lately. Earlier this year, for instance, Western Canadian Select, the benchmark price for bitumen from the oil sands, traded at nearly half the price of Brent crude. Such a steep discount set off alarm bells in Alberta, as well as in finance minister Jim Flaherty's office.

A lack of oil-moving infrastructure to handle the rising volumes of crude from western Canada put domestic oil on sale. Not only did that hammer industry profits, but it also slashed the amount of money flowing into public coffers in Alberta and Ottawa.

Canada's oil industry saw this coming, but still found itself caught flat-footed. As oil sands production continues to rise, industry's need to get crude to an ocean becomes more urgent. At this point, oil sands players are getting less picky about which ocean that turns out to be. If the Pacific route is closed, they'll push on to the Atlantic. And if TransCanada's Energy East proposal doesn't fly, then plans are already afoot to take advantage of melting Arctic sea ice and head north. Once oil can be loaded onto a sea-borne tanker, it can fetch global prices.

Connecting land-locked oil to an ocean is a great outcome for the Suncors, Shells, and Imperial Oils of the world, but what does it do for Canadians filling up at the pumps? Not what one might think.

A surplus of oil in North America means crude prices in Canada and the U.S. have been trading well below world prices. While the energy industry had to accept getting short-changed for a while, it hasn't sat on its hands. It began putting hundreds of thousands of barrels a day on rail cars, while also turning around pipeline projects in Texas and the Midwest. That's helped to alleviate the glut of oil responsible for the gap between the price of North American barrels and those elsewhere. Domestic oil prices are now much closer to those in the rest of the world. As more pipelines are built to take oil to a coast, North American prices will continue to merge with global oil markets.

But that price convergence also means Canadians will pay that much more every time they fill up their cars. Make no mistake about it, as more Alberta oil ends up on the high seas, the more Canadian oil prices will mirror the higher prices paid in the rest of the world. When the price of oil rises, clearly, the cost of gas at your neighbourhood station goes up as well.

I wonder if Prime Minister Stephen Harper will mention higher domestic pump prices the next time he extols the nation-building merits of the proposed west-east pipeline?

Canadian motorists, like American ones, will be hard pressed to see any benefits from their country's rising oil production. Oil plays in North Dakota, Texas, and elsewhere around the country may have reversed declining U.S. production, but much of that oil is also ending up on rail cars bound for coastal refineries. Despite huge gains in oil production, the average price of a gallon of gas in the U.S. has set a new record high in each of the last two years.

A new pipeline to the east coast will allow western Canadian producers to pull more oil out of the ground. That has benefits, certainly. Oil companies, in particular, will get a lift. But oil production isn't the only thing that will go up. So will the cost of filling your tank.

Why not everyone’s happy to see the bitumen bubble burst
July 25, 2013 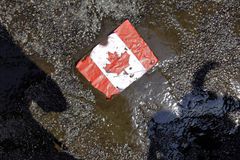 Jeff Rubin: Fracking for yellowcake: The next frontier?
February 5, 2013 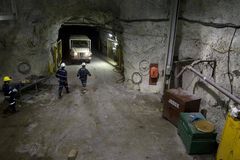