The world is awash in oil and could be running out of places to put it. It’s a situation that prompted the head of oil giant BP PLC to joke that every swimming pool and storage tank will soon be brimming with crude, which is cheaper than it’s been in 13 years.

Oil traders and speculators, however, are looking to stash their oil at sea, in hopes they can sell it at a profit in a few months as prices rise.

A growing number of the world’s oil ships are set to be used as floating storage, analysts say, as traders gamble that the rise in crude prices will more than cover the $50,000 (U.S.) a day it costs to rent and anchor a ship that can hold enough oil to fill 127 Olympic-size swimming pools.

“The utilization of tankers for floating storage is back in the limelight,” said Noah Parquette, a shipping analyst with JPMorgan Chase & Co.

Speculators are showing new interest in floating storage because oil futures are worth more than current or spot oil prices, a gap known as contango. Also aiding this trade are moderating charter rates for supertankers, and record oil inventories that have left some oil companies seeking new storage space.

“Many traders are looking at the future prices, which will be higher,” said Rajesh Verma, a New Dehli-based analyst with Drewry Shipping Consultants Ltd.

But speculators who hope to profit must be able to cover the storage costs of at least $1 a barrel per month, depending on the region and type of ship. That means floating storage at current rates is a money loser.

However, long-term prices of oil have been rising to as much as $10 a barrel over current prices. If this trend continues, there could be money to be made buying it today, stowing it in a moored ship, and selling it in three months or a year. 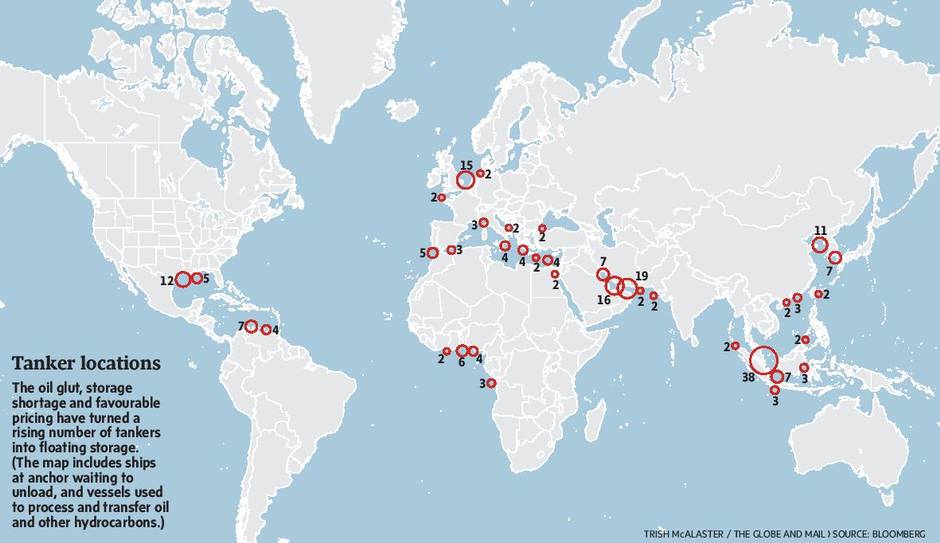 Traders are showing new interest in floating storage, and some are paying for the option to drop anchor and sit fully laden, said Omar Nokta, managing director of shipping research for Clarkson Capital Markets in New York.

“What we’ve seen in the tanker spot market is a lot of charterers seeking options, so that when they fulfill their first voyage or second voyage, they have the option to use the tanker as floating storage,” said Mr. Nokta, adding none have done so yet because the contango is not wide enough.

About 20 to 25 of the world’s 650 supertankers, which can hold two million barrels and are called very large crude carriers, are in use as floating storage, but about half of these are waiting to discharge cargo or are looking for buyers, Mr. Nokta said by phone. Since oil prices crashed in the summer of 2014, the volume of oil in short-term storage at sea has risen by 33 per cent, according to Blooomberg data.

The number of ships used as floating storage peaked at 132 in 2009-10, a period the International Energy Agency refers to as supercontango – futures prices were far above spot prices and traders got rich.

The IEA says the push for floating storage lately has been driven by a lack of onshore storage, and logjams at oil and refinery port terminals. Chinese port delays have caused oil vessels to remain anchored for long periods, and ships have been slow to unload in Belgium and the Netherlands owing to a backlog of refined petroleum products destined for central Europe.

Faced with expensive port delays, the companies that charter the ships are asking them to sail slowly. The lower speeds and time spent waiting to discharge cargo amounts to what one shipping executive calls “forced storage.”

“All of a sudden we are seeing that our voyages are taking longer, that the [customer] is not too bothered about arriving quickly … and he certainly doesn’t want us waiting at his cost on arrival,” Patrick Rodgers, chief executive officer of Euronav NV, a Belgium-based company with a fleet of 52 oil tankers, said on a recent conference call.

He said the recent driver of tanker demand – floating storage amid a lack of space in land tanks – is a shift from a year ago, when contango was the talk of the oil trade.

But in practice, that contango play largely failed, as long-term prices slumped and speculators lost money.

“By the time the ships had been booked and by the time that they might have been in position to load cargo, the [spot] oil price had recovered by $10 or $15 and the contango had been squeezed out,” Mr. Rodgers said.

Contango refers to commodity prices that are higher in the future than today. Its opposite is called backwardation. The debate will likely never be settled, but some market experts believe contango is the normal state for non-perishable goods such as oil or gold, because higher futures prices account for the cost of storage. Markets in contango can offer profit to speculators and signal rising prices, but can be money losers for investors in funds that regularly buy and sell futures contracts. On the London Stock Exchange in the 1800s, contango was a fee paid by buyers to sellers for the delay of a payment. The word is believed to be a variant of continue or contingent. 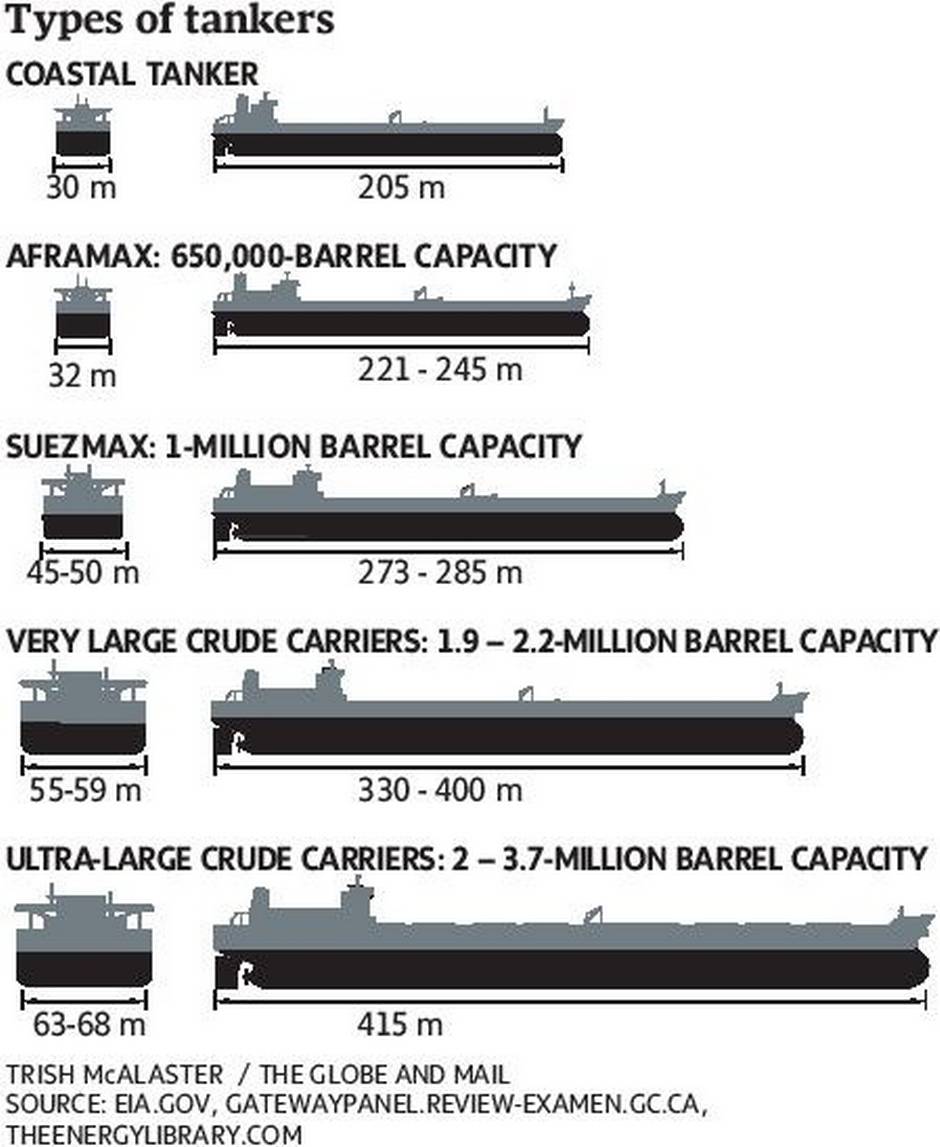 Even though some believe futures prices should naturally be higher than current prices, given the costs of storing a commodity, the markets do not agree. Oil markets only recently entered a phase of contango, and spent much of the time between 2011 and 2014 in backwardation, with current prices higher than spot prices. That makes the current contango oil market a somewhat rare and welcome shift for traders. Today, the contango is about $9 (U.S.) for the U.S. benchmark oil, West Texas intermediate, a margin that is approaching the costs of storage, and therefore, profitability. But the price gaps between futures and spot oil delivery have yet to near the $15 seen during the financial crisis of 2008-10. The so-called supercontango spurred producers and speculators to fill and anchor a record 132 oil tankers. Today, about two dozen tankers are being used as storage, including those waiting to unload.

Low oil has been a boon to tanker owners

The 650 supertankers on the oceans are called, simply, very large crude carriers, or VLCCs. The ships hold about two million barrels of oil – cargo worth about $62-million – compared with the world’s daily consumption of 96 million barrels. Most of the bigger supertankers, ultralarge crude carriers, are being scrapped in favour of smaller vessels known as Suezmax and Aframax carriers that can service a wider range of ports and travel the Suez canal. These medium-sized tankers are also commonly used on shorter voyages. The plunge in oil prices has been good news for tanker owners, who have enjoyed robust demand as refiners and other buyers have stocked up on cheap crude.

In this index of ship charter prices, “dirty” refers to crude or unrefined oil. A look at the dirty index shows that the prices charged by tanker owners have held up well amid the abundance of oil that needs to cross the world’s oceans, and a tanker fleet that is not quite big enough to fulfill the demand. Any rise in floating storage will drive up rates further. The dirty index is one of several published by London’s Baltic Exchange. Its refined product counterpart is call the Baltic clean tanker index. The Baltic dry index, meanwhile, tracks shipping rates for coal, iron ore and grain. 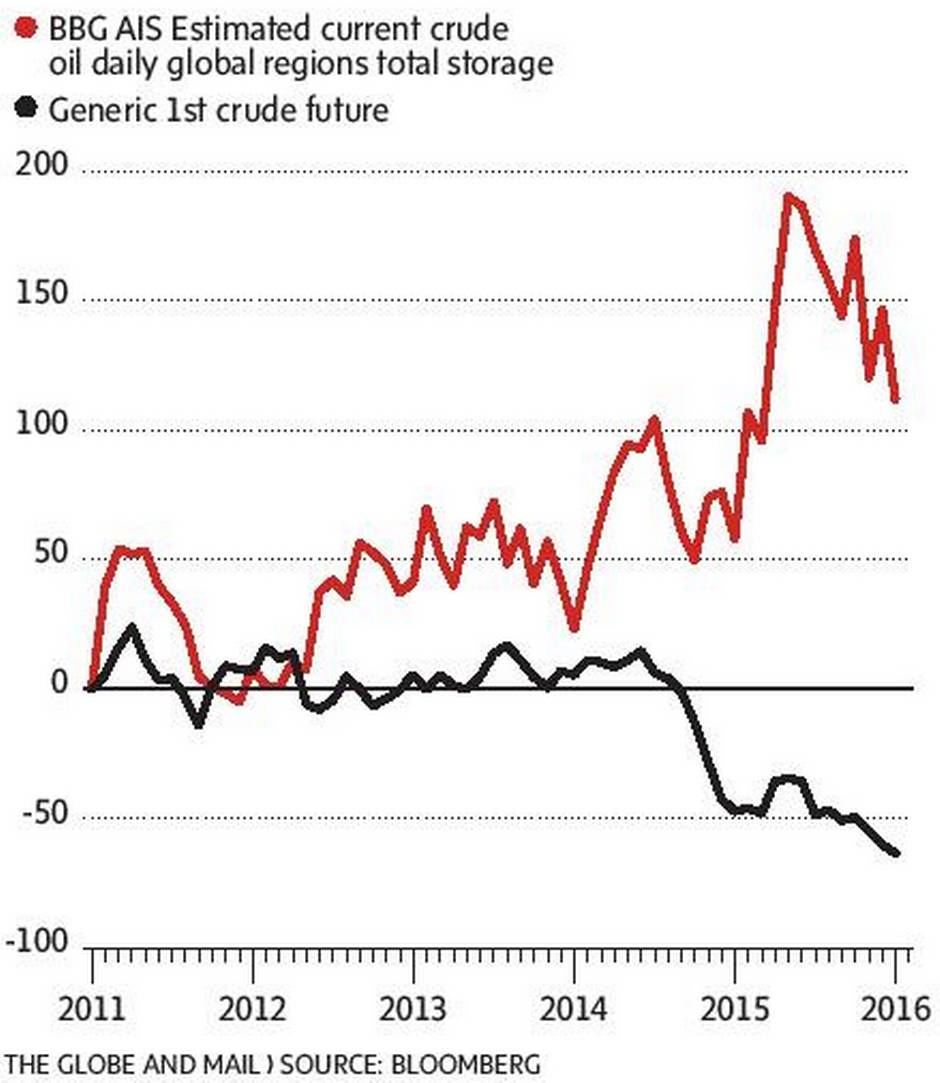 What does it cost to store oil at sea?

A Bloomberg report that commodities trader Glencore PLC had chartered four crude tankers as floating storage in January was a signal the oil markets could be entering a phase in which patience is profitable. The Swiss company declined to comment on the report. The world of oil speculation is murky; traders don’t publicize their moves, and tanker owners rarely name their customers. But analysts and speculators began pulling out their calculators to see whether there was money to be made buying oil today and selling it several months later, after paying for the ship and its associated costs. A growing number say it is nearing that point, or already there.

All prices are for West Texas intermediate in U.S. dollars on the first trading day of the month unless noted. Source: Bloomberg