Shell casings from a black AR-15 rifle spin in slow-motion flight. Each one is labelled with the name of a school or a city where a mass shooting has taken place: Columbine; Carson City; Virginia Tech; Aurora and Minneapolis and Brookfield and Newtown.

This new television ad wades into the debate over gun legislation in the United States at a crucial time, as the Senate prepares to vote Thursday on President Barack Obama's proposals to stem gun violence. But the agency behind it is located in Canada.

Grey Canada has been working with a newly formed group seeking to brand itself as the Mothers Against Drunk Driving of the gun debate: Moms Demand Action for Gun Sense in America. The partnership came about after chief creative officer Patrick Scissons, on vacation south of the border over Christmas, saw a news segment with Shannon Watts, the founder of the group that at the time was called One Million Moms for Gun Control.

Mr. Scissons was moved to reach out to Ms. Watts and ask whether she needed help with the cause. From that conversation, Grey landed on the pitch list for agencies and then secured the account to do pro bono advertising work – something nearly every agency does for a select portfolio of causes.

The group's first television campaign will launch on networks such as CNN and MSNBC and in smaller markets as the group's members lobby for time on local stations.

Ms. Watts says she was inspired by the MADD brand.

"It really changed the culture and the perceptions around driving while intoxicated," she said. "There's an important role moms play in touching the emotions of America."

As the group gained traction, Grey did a number of smaller promotions, including one involving a typically Canadian perspective. Noting that the popular candy Kinder Surprise Eggs are banned in the U.S. – because of the alleged choking hazard – the Canadian advertising team worked up an Easter campaign sending eggs to Anderson Cooper and other news personalities. The point was that there are more limits on Kinder eggs in the U.S. than there are on the purchase of assault rifles.

The group's influence has been growing, which Ms. Watts attributes to the power of social media. Since it was launched in December, it now has roughly 90,000 members in 90 chapters across the U.S. On March 28, some members were invited to the White House to stand on stage while the President spoke about gun legislation.

The new ad is darker than the Easter campaign – the images of shell casings are accompanied by audio of 9-1-1 calls, news reports and solemn presidential addresses about shooting incidents, and the voices of parents whose children have been killed.

The organization's goals include background checks for gun purchases, a ban on assault weapons, and the tracking and regulation of ammunition sales in large quantities. It is funded by the members and by online donations.

The gun debate is not only a focus for the Canadian office of Grey Group, which is a multinational firm; in a meeting last fall, Mr. Scissons and Tor Myhren, chief creative officer and president of Grey New York, discussed it as an issue deserving consideration.

For agencies, these types of free public service announcements are a creative opportunity as well.

"You talk about agencies really wanting to do breakthrough work, work that strikes a chord emotionally and really motivates public opinion, the public service space is obviously the greatest area for that," Mr. Scissons said. "Any profile it brings the agency based on the success of that work is great. But on a personal standpoint, feeling a connection and being passionate about the cause, it's infectious within a shop." 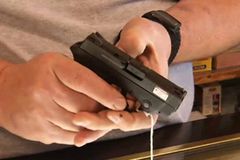