Adidas was already assured of a higher profile and a hefty increase in sales regardless of the outcome, because it sponsors both finalists, as well as FIFA itself and the Golden Boot awarded to the top scorer, Colombia's James Rodriguez, who is part of Adidas's stable of star athletes. It also makes the official ball, the Brazuca, for which it launched a widely viewed social media campaign.

Billions of dollars are at stake in a fight being waged across every major global sports platform from soccer and basketball to tennis and golf, with the leading combatants spending record sums on marketing and sponsorship rights.

"They run neck-and-neck, and they have both overpaid for premier positioning" in various big-time sports, said Brian Cooper, president of Toronto-based S&E Sponsorship Group. "This is an ongoing battle for supremacy. It says a lot in terms of the intensity of the battle between the two parties."

The day after the World Cup, Adidas grabbed soccer headlines again with a record £750-million ($1.3-billion U.S.), 10-year deal to become the exclusive supplier of shirts and gear to Manchester United, one of soccer's biggest global brand names. Nike, which has held the Man U rights since 2002, had earlier backed out of the bidding. The U.S. maker was also replaced after 20 years as the outfitter for another English side, Arsenal, by the No. 3 sporting goods maker, Puma SE, in another record deal. 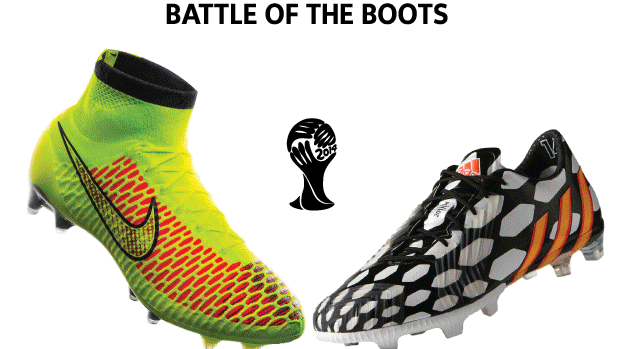 But for all that, Nike has no intention of dropping its frontal challenge to Adidas's long-standing lead in the soccer market, and it came through the world's most watched sports extravaganza with some marketing coups of its own.

Adidas may have had its name in lights. But the U.S. powerhouse sponsored more World Cup teams, 10 to nine for Adidas, including semi-final losers the Netherlands and Brazil, and such individual tournament stars as Brazil's Neymar da Silva Santos Jr. And industry experts gave Nike, an expert in ambush marketing, higher marks for its aggressive social media campaign.

In fact, Nike was easily the most viewed video advertiser of any marketer in the runup to the tournament, with more than 240 million views, according to one analysis, almost double the reach of runner-up Samsung. Adidas finished third in that particular eyeball chase.

The Portland, Ore., company also scored marketing points by flying in such big-time Nike stars as basketball's LeBron James who took in the final and made himself freely available to the media and Brazilian autograph seekers.

Both Adidas and Nike enjoyed a big spike in soccer-related gear in the runup to the World Cup. Nike, which made its first pair of soccer boots 20 years ago, posted $2.3-billion in soccer-related sales in its latest fiscal year, an increase of 18 per cent from the previous year.

But thanks to the result, Adidas expects to sell more than half a million German jerseys outside Europe alone, up from about 300,000 in 2010, when Germany's Cup bid in South Africa petered out in the semi-finals. It has already sold more than eight million replica World Cup jerseys, a quarter of them bearing Germany's distinctive logo.

Adidas, which traces its soccer roots back more than 50 years, has forecast that the sport will account $2.7-billion in revenue this year.

The World Cup outcome is an important boost for Adidas, providing "the validation that they truly are the No. 1 player for the time being," said Keith McIntyre, chief executive of sports marketing consultant KMAC Group in Burlington, Ont. "What this is going to do for the brand is phenomenal. It's going to set them up for the next four years before Russia [in 2018]."

But both companies notched their share of wins, he added. "The war has just begun."

After Germany dismantled Brazil in the semi-final, Herbert Hainer, Adidas's chief executive, crowed that "Adidas is the clear No. 1 in football globally."

That's a slight exaggeration. Even in the final, the player scoring the winning goal for Germany, Mario Goetze, was wearing Nike cleats.