Even the chief marketing officer of Airbnb Inc. has a soft spot for hotels sometimes. While in Alberta next week, in an unusual move, Jonathan Mildenhall won't be booking through his company's home-sharing service, but instead is looking forward to a stay at the "stunning" Banff Springs. He'll be there for the Gathering, a conference organized by marketing agency Cult, where he'll be talking about "marketing that matters."

Airbnb's Super Bowl ad was all about diversity, and the company's chief executive officer has been quite vocal opposing President Donald Trump's immigration ban. What's your view on the balancing act of marketers getting political?

I don't believe that any of the brands that had culturally significant messages in the Super Bowl this year were actually taking political stands. Now, my chief exec's position on immigration, and the time of that, that was directly against a political executive order. But let's put that in one bucket, and talk about brands that make what I call social stands. … What a lot of marketers are afraid of is putting their brand in the middle of political discourse. It's about doing what's right by humanity. Whatever your community of consumers believes in, the brand should take that social stand. I don't believe that Coca-Cola, three years ago when it did America the Beautiful, [produced when Mr. Mildenhall was Coke's vice-president of global advertising strategy, and featuring the song in different languages] was any more or less politically charged than when it ran during this year's Super Bowl. The social stand that Coke was taking was relevant then, and it's relevant now. And the social stand that Airbnb takes is entirely consistent with the values of our community. So did we take a political stand? I'd like to say no. Did we take a very clear social stand? Absolutely.

Do you think that might be a false distinction for brands right now, though, considering the current climate, where so many social issues are also political? Particularly when we talk about things like immigration – or with "America the Beautiful," the cultural identity of who is an American; is that a distinction you can still meaningfully make?

It's interesting. Here's where I've been, historically: During the runup to the U.S. Supreme Court's ruling on same-sex marriage, there was a lot of temptation from my team for us to be pushing marriage equality. At the time I didn't want to, because I didn't want to be on the wrong side of the political agenda for the brand – because I didn't feel that that was the brand's role. Of course, all of the brands I have ever been involved in talk about and praise and promote the LGBT community. I've invested heavily across the course of my career on Pride events, charities that support the LGBT community. I think that's the right thing to do. But when it came to marriage equality, did I want the brand to step out in front of that political agenda? I didn't. As soon as the ruling was made, then I celebrated marriage equality.It's a nuance, but as a leader, I want to always ensure that the brand doesn't get caught up in a political crossfire. In the U.S. particularly, it's incredibly charged right now. I'm very, very conscious of the fact that I want my brand to be bipartisan – but bipartisan with a universal ideology at the core. I want to make sure that my community feels that the brand is sensitive and is not exclusionary, providing that the brand is respected for promoting diversity and inclusivity.

Airbnb announced its acquisition of Montreal-based Luxury Retreats. You're expanding more into luxury accommodations; last year you launched a vacation experiences service called Trips; and you've got a flight-booking tool in the works. How do you shift the meaning of your brand as you attempt an expansion into other travel services?

We genuinely feel we can stand for end-to-end travel – everything from booking to transportation to the experiences you have, the restaurants you go to, the people you might meet. So we've got this brand identity that is enabling people to live like a local – hence the "live there" slogan. As long as the products and services are furthering that proposition, we'll seriously consider it. Luxury Retreats gives us the opportunity to invite people who previously might have thought of Airbnb as being a budget, low-cost accommodations proposition into the brand.

Last year, the Art Institute of Chicago used Airbnb as an advertising vehicle – with a campaign that recreated Van Gogh's bedroom painting as an actual room, and put it up for rent. What did you learn from that?

They came to us with the idea, and it became the biggest marketing story in Airbnb's history. Their ticket sales were up – so it was great for them and for us. It inspired us to set up a tool online so that other brands could submit their proposals, and we would partner with them. It's an amplification for those brands, and it takes the Airbnb proposition to deeper audiences that we might not reach through our own marketing. Around the world, we have had 12 brands, including the likes of Audi and Sonos, that have used Airbnb to market their own products.

Recently, Lady Gaga gave you some serious publicity by posting her Airbnb accommodations for the Super Bowl on Instagram, and last year Beyoncé did the same on Facebook. This kind of "influencer marketing" is growing – what's your strategy for that, and how do newer rules about having to disclose what is an ad affect those deals?

Influencers are used in marketing generally to endorse and legitimize a brand. Really, it all started with Mariah Carey in 2015. She was the first celebrity to stay on the platform. It came about very organically. We knew her management team. The impact is phenomenal because people are interested in the lifestyle of these influencers. If that lifestyle can be authentically associated with staying in interesting Airbnb properties, that is a no-brainer for us. But at the same time, we have a responsibility to comply with the [Federal Trade Commission] here in the U.S. and any other [countries'] marketing guidelines. It's really important that brands help consumers understand that it is a marketing partnership. You will always see "Thanks for the gift, Airbnb," or "Thanks for picking up the tab, Airbnb" – the language around it is very clear that Airbnb has paid for the accommodation.

Airbnb is at the centre of some negative publicity . Cities such as New York, London and Toronto have been looking at new regulations on short-term rentals; neighbours have expressed concerns about units being used for parties or other disruptive activities and how guests doing damage could jeopardize an entire building's insurance; there are questions about how home-sharing distorts real estate markets. You've created advocacy groups for your hosts to counter some of that. As a marketer, how do you handle the controversial aspects of the brand?

It's arguably one of the most complex areas of managing the brand narrative. The aspirational, "belong anywhere" message has to work really, really hard at creating a disproportionate share of the conversation. I always like to feel confident that for every dollar I'm investing in that part of the brand narrative, I'm creating $10 worth of conversation – the multiplier has to be that significant. And then at the same time, in local conversations with cities and communities, the narrative is about Airbnb helping middle-class citizens in urban centres stay in their homes and make ends meet. The challenge for us as a marketing organization is knowing when to speak with those different messages. We all focus on exactly the same news stories, on a nightly basis, we have a team of people working on public policy that are helping us understand what narratives might be emerging in cities all around the world. The checks and balances between public policy and brand marketing are probably more integrated at Airbnb than any company that I've worked with.

As the brand changes, how do you see your marketing investments shifting in the future?

It's incredible how far the Airbnb brand has come. Just two years ago, a brand campaign featured a single woman travelling around the world, with the voiceover that started, "Dear stranger, when I first booked this trip, my friends thought I was crazy. Why would you stay in someone else's home?" Airbnb was still seen as a bit of a weird alternative travel proposition. Now, we're no longer the disruptor. We're part of the travel establishment, the business is so big. "Living like a local" is such a valuable idea for us from a marketing perspective. It is flexible enough for us to promote all of the products that I see in the pipeline.

Airbnb buys Montreal-based Luxury Retreats to bolster high-end vacation offerings
February 16, 2017
Facts & Arguments
Why is it so hard to find a problem-free Airbnb in Toronto?
November 7, 2016 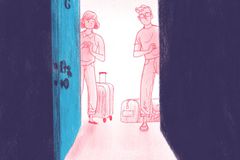 Airbnb cuts 130 Vancouver listings that appear to be commercially owned
November 13, 2016
Follow Susan Krashinsky Robertson on Twitter @susinsky
Report an error Editorial code of conduct
Due to technical reasons, we have temporarily removed commenting from our articles. We hope to have this fixed soon. Thank you for your patience. If you are looking to give feedback on our new site, please send it along to feedback@globeandmail.com. If you want to write a letter to the editor, please forward to letters@globeandmail.com.
Comments