Marcus is working the room.

Part of a solicitous team working to create an impression of accommodating luxury, he greets guests in the plush lobby of the Fairmont Chateau Lake Louise. A ripple passes through the teeming crowd of winter holiday makers. One by one their heads turn, sometimes mid-conversation, the way the atmosphere can change in a room when a celebrity passes through it.

Marcus is handsome, with a solemn and kindly mien. Guests fawn over his deep brown eyes, his soft coat and his floppy ears. A yellow labrador retriever, Marcus is one of roughly a dozen “canine ambassadors” working throughout the Fairmont Hotels & Resorts Inc. chain, in Canada, the United States and Kenya. Since the program began as an experiment in Vancouver in 2001, the ranks of four-legged employees have been growing steadily.

Fairmont is not alone among luxury hospitality companies employing pets to give their premises a more homey feel. The historic Algonquin Hotel in Manhattan has had cats for about 90 years, dating back to a stray who wandered in off the street, in what may be the greatest rags-to-riches story of the feline world. (One early cat was named Rusty, but the actor John Barrymore disliked the name so much, the hotel staff changed it to Hamlet, to honour the character Mr. Barrymore was playing while he stayed there. Seven cats have been Hamlets. The last three, all female, have been called Matilda.)

“We have people who have heard about the cat and come over just to see her,” said Alice de Almeida, chief cat officer at the hotel.

More recently, Kimpton Hotel & Restaurant Group Inc. has brought dogs into some of its lobbies, each of whom is known as “director of pet relations.” The Ritz-Carlton Hotel Co. resort in Colorado has two “canine ambassadors,” a Bernese Mountain dog named Belle, and Bachelor, a Saint Bernard.

The proliferation of animal life in lobbies speaks to the changing nature of luxury hospitality. For years, hotels communicated their status through excessive formality and white-glove treatment. But increasingly, consumers seem to prefer less stilted service.

“They want quality, but they don’t want it delivered in a stuffy, formal way,” said Pam Gilbert, director of sales and marketing at the latest Fairmont to bring in dogs, in Scottsdale, Ariz. “They want an experience that allows them to relax.… The ability to genuinely connect with the customer has always been part of what true luxury was.” 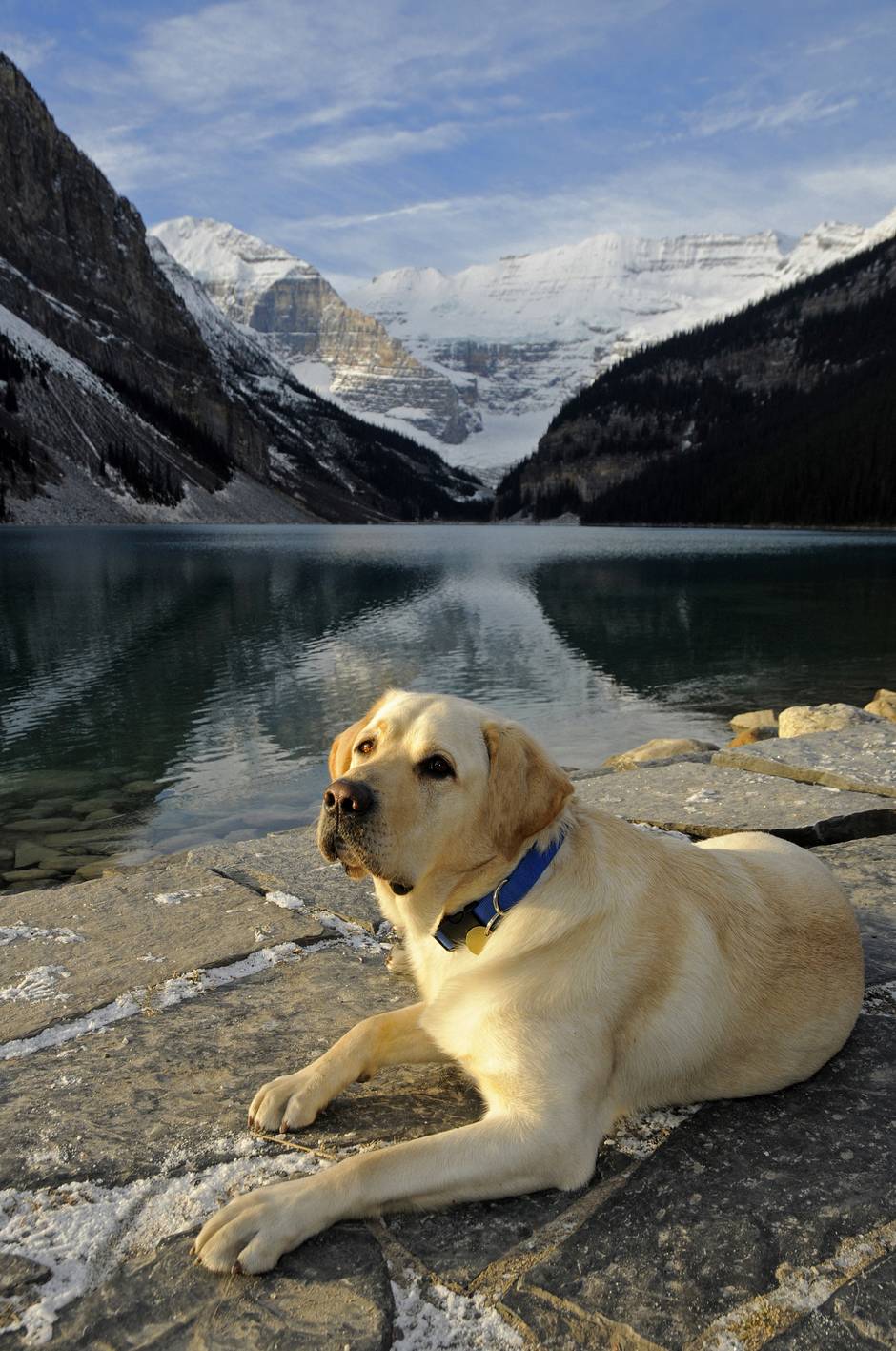 There is a reason that the Internet is dominated by cat videos and fluffy puppies. The irresistible emotional connection that animals create can also help hotels to cultivate customers’ affection. And animals are popular fodder for social media, where photos shared by friends are more compelling than traditional paid advertising. Lobby pets can be a valuable form of marketing.

“If I had 25 cents for every picture that was taken with Beau, I’d be retired,” said Debbie Wild, a concierge at the Fairmont Hotel Vancouver and owner of the yellow lab who works in the lobby five days a week. “It’s been a great marketing tool. When the Olympics were here, there were pictures of them all over social media. There’s huge attention.”

Guests have told Ms. Wild that they choose to stay because of the dogs. When Joe Biden was in town, he would not come through the lobby without patting a dog. The hotel includes information about the dogs in promotional packets for conference attendees.

“Animals, in general, are great for marketing,” said Hayat R’Ghif, a spokeswoman for Le Bristol in Paris, where two Birman cats – Fa-Raon and Kléopatre – reign over the lobby. Le Bristol does barely any paid advertising, focusing instead on marketing through social media, e-mail and its website. Photos of the cats appear in those digital channels. They are a fit with Le Bristol’s brand. “They are beautiful cats, from a good breed, they are white and pristine so they fit well with the décor.” One guest was so taken with them, she adopted a cat from the same breeder.

Animals may be more welcome in high-end places, but they still must meet a certain standard.

At the Fairmont Scottsdale Princess in Arizona, the dogs’ teeth and fur are brushed every day. At the Fairmont in Vancouver, the yellow lab Beau has a Gucci collar, and Mavis – who retired last summer after a 12-year career but still makes special appearances – wears Louis Vuitton.

Most hotels say allergies are not a problem, since the lobbies are regularly cleaned, and the animals usually don’t bother people who move away from them.

For some, no amount of preening or cleaning will make a dog a welcome sight. On occasion if someone is fearful, staff keep the animals on a leash or behind a desk when that guest is in the lobby. 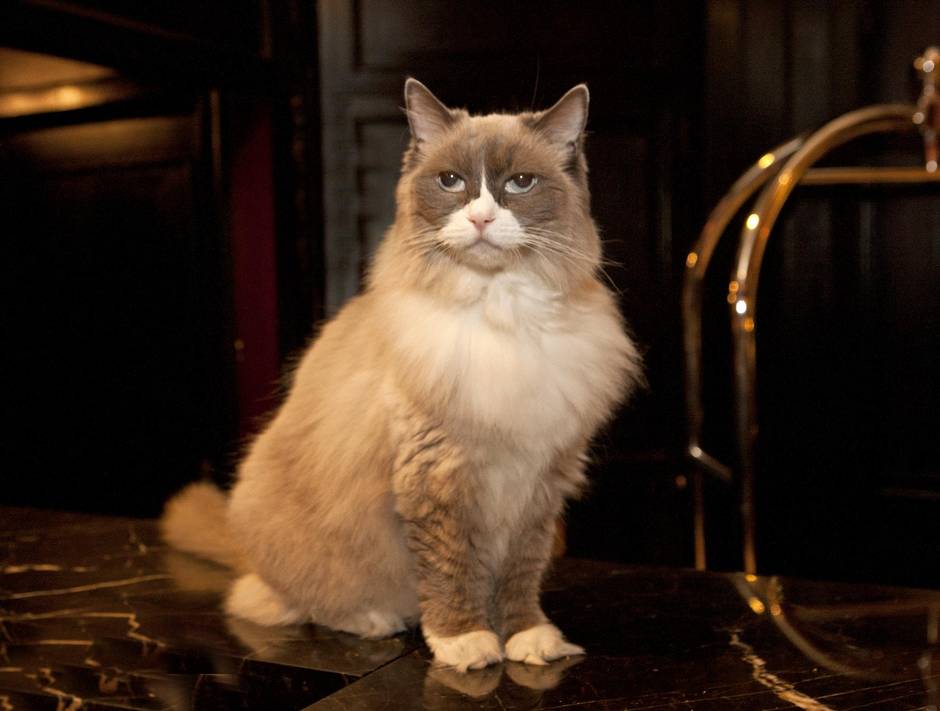 At the Algonquin Hotel in New York, guests can book a “Friends of Matilda” package that includes a welcome letter from the cat, a plush doll that looks like her, and a book of cat health and beauty tips. It is one of the hotel’s most popular packages.

Fairmont works with local guide dog associations to adopt the dogs – which have received hundreds of hours of training, but were judged unsuitable for guide work. (Often they were too friendly, or unable to learn a crucial skill such as being willing to lead on a walk. Others had hip problems that made them unsuited to pound the pavement as a guide all day.)

Hunter, a three-year-old yellow lab and new recruit, is still on “probation” in Vancouver. At first, true to his breed, he would follow guests into the elevators or into the Dior shop. He is learning the rules.

“It used to be, back in the day, that there were cookie-cutter hotel luxury experiences. Those days are gone,” said Steven Holt, a spokesman for Ritz-Carlton and owner of Bachelor, a yellow lab who used to be the lobby dog at the Ritz’s Bachelor Gulch resort in Colorado. (Another Bachelor has now taken over.) He is skeptical, however, about dogs fitting in at other luxury hotel locations. “It made sense in Colorado, because it’s dog country. … There are certainly places where a more formal experience is appropriate.”

While cats are usually content to stay put, the dogs mostly have owners with whom they go home at night. Many require the time off after a day of affection, socializing and walks.

This setup means that personnel changes sometimes affect the canine world as well: Smudge the yellow lab recently moved from the Fairmont St. Andrews in Scotland to the Fairmont Hotel Macdonald in Edmonton, when her owner, general manager Garrett Turta, made the move. At some Kimpton hotels, lobby dogs left when their owners also moved to other jobs. At other locations, such as the Hotel Palomar San Diego, the employee-owners bring in their dogs whenever they like.

That can be a big morale booster for the dog owners, who don’t have to leave their pets at home all day, as well as the other staff – those who like dogs, anyway. “It’s a huge stress release for staff,” said Ms. Gilbert at the Fairmont in Arizona. 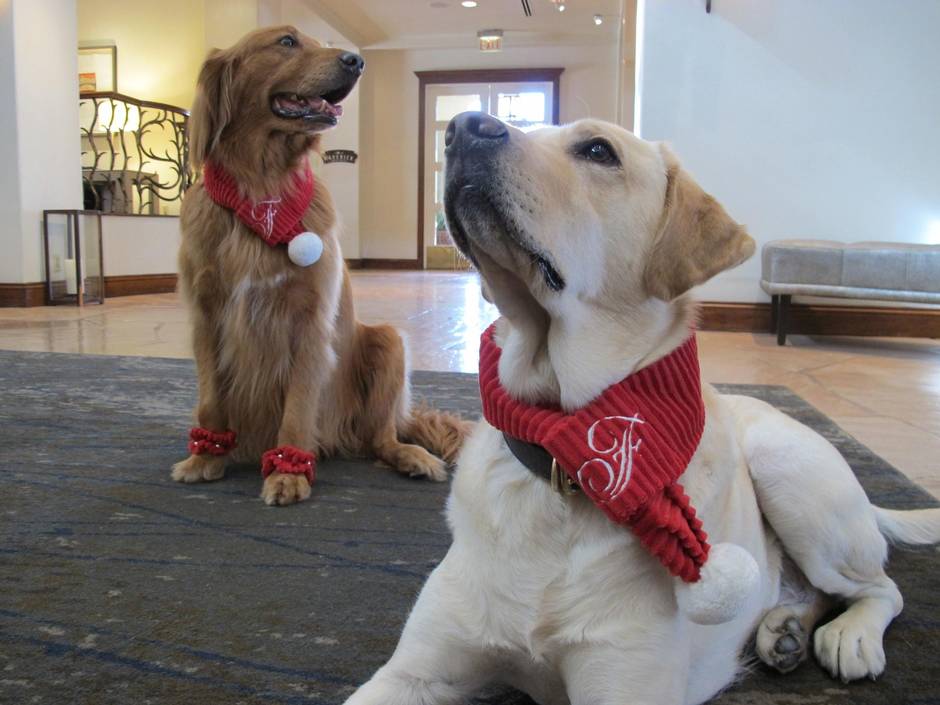 Gibbs (right) and Bixby, a Labrador and a golden retriever, are the newest addition to Fairmont’s collection of “canine ambassadors" at the Fairmont Scottsdale Princess in Arizona.

Having a lobby pet isn’t cheap. Some hotels cover vet bills, as well as costs for additional training or grooming. But the investment can pay off.

“We do believe it drives repeat visits,” said Mike Taylor, a corporate spokesman for Fairmont. The head office does not install “ambassadors” – it usually begins with staff at the hotel who push for it. More and more are doing so. By next year, Mr. Taylor predicts as many as six more hotels in the chain could have dogs. 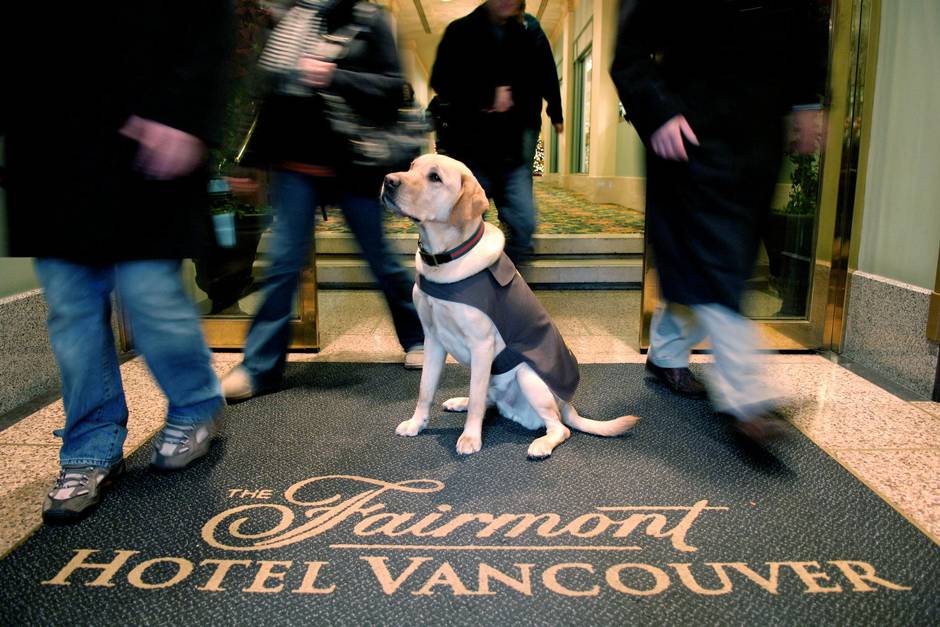 Beau, a yellow lab, works in the lobby of the Fairmont Hotel Vancouver five days a week.

In Arizona, the Fairmont saw its J.D. Power rating rise 11 points in the past year, and Ms. Gilbert believes the dogs contributed to that.

At the Algonquin, guests can book a “Friends of Matilda” package that includes a welcome letter from the cat, a plush doll that looks like her, and a book of cat health and beauty tips. It is one of the hotel’s most popular packages. She has nearly 10,000 Facebook friends, and more than 1,000 Instagram followers.

“The cat’s worth a million dollars,” said Nicholas Sciammarella, manager of marketing and e-commerce at the Algonquin Hotel.

A children’s book has even been written about the cat; there are also books about the resident black lab, Catie Copley, at the Fairmont in Boston. Another book is in the works, about Bixby and Gibbs in Arizona, which the hotel plans to sell on site. It is also planning a special section in the hotel shop with dog merchandise, such as plush versions of the pets, and T-shirts with their pictures. 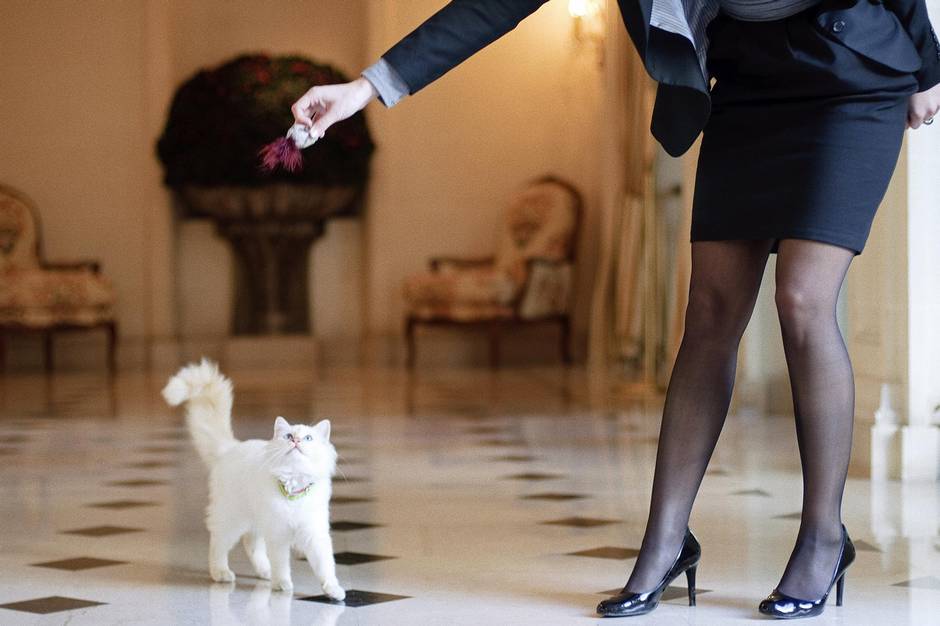 At the Le Bristol in Paris, Birman cat Fa-Raon and his partner Kléopatre welcome guests, especially children, from their favourite perch at the concierge desk. The pair wear jewelled collars designed by Goyard.

The emotional link it creates with customers goes above and beyond the usual touches hotels use to appeal to customers. Nobody has ever been moved to write a children’s book about a particularly lovely room service spread.

At Fairmont, each dog has its own e-mail address, where people often request reserved walk times, or just write to say hello. In those cases, owners such as Ms. Wild reply in the voice of their dogs.

“It’s amazing to see somebody looking sort of harried, and you know they’ve been through security checks and baggage problems and everything else. The moment they see the dogs … they reach out and you see the stress just come right off them,” said Ms. Gilbert, in Arizona. “We even have guests get right down on the floor with them.”