Who would leave a job working with some of the music industry's legendary talents, to try to fix a brand in the midst of a series of public scandals?

Bozoma Saint John did just that in June when she left her job as a marketing executive at Apple Music to become the first chief brand officer of Uber. She brought with her what she describes as an "innate fearlessness."

Ms. Saint John spoke to The Globe and Mail during a visit to Toronto on Wednesday.

You've been a marketer at some heavy-hitting brands – Apple and Pepsi – that put you in meetings with some of the best minds in entertainment. At Pepsi, you got to work with Beyoncé on the Super Bowl. What draws you from roles like that to a company such as Uber?

It's the same kind of opportunity. It may not seem that way on paper, but it is. When I looked at Beyoncé's Super Bowl halftime show, there hadn't been a black woman on that stage since Janet Jackson. So what was going to be new about not just that moment for her, but for a legacy? That's the same thing I look at here. We have a situation. We need to address it from a very serious standpoint, culturally, internally.

But we also need to diversify the storyline. How are we going to connect to people, and leave a legacy that is better than what has already been presented?

That diversity issue – with everything from Susan Fowler's account of why she left the company, the discussions that started and more recently the change in leadership – I had friends, I'm sure you did too, asking, 'Should I boycott this service?' How do you repair that relationship with the brand?

You've got to show it. This is show and tell, for real. How are we making this environment better? I'm okay with people giving us pause, and saying, 'I want to make sure that's real before I come back.' I'm okay with that. Hold us to that standard. I want us to hold everybody to that standard, by the way. We're not making the noise just so we can go back to the same old way in a year or two. We want to make real change.

Sometimes the marketing department is tasked with telling an external story but doesn't have influence over those internal things. Do you play a part in those changes?

I'm telling you, I would not have come if I was not going to be able to have a seat. If the culture doesn't change, how am I going to succeed? I can't be in an environment that is not conducive to me as a black woman. I can't change this skin. I can't change this gender. If I can't operate in this environment, then, what the hell? I've got to be a part of that too. I joined the board of Girls Who Code, which is the first organization to which we granted money to change the way we look at women in technology. It's very near and dear to my heart, even though I don't code myself. It's important to be an ally. You don't have to be a black woman to think we should have more black women in tech. I don't have to be an engineer to understand we need female engineers. I'm not just trying to get female marketers up in here, I'm trying to get female engineers up in here.

So many people are making purchasing decisions with an eye to what reflects their values, their ethics.

That's really important. That has changed so much. As recently as 20 years ago, people were not necessarily making decisions based on a company's values. Now, you can't escape it. That's why these questions about diversity and inclusion are so important. Who's sitting at the table, and making those decisions? We care about that. It's an incredible place to be.

What lessons from your marketing roles at Pepsi, Beats and then Apple do you bring to Uber?

I came to Beats through tragedy. My husband had passed away in December of 2013. I met [former Interscope Geffen A&M Records chairman and Beats co-founder] Jimmy Iovine in February, 2014. I was successful at Pepsi. It's not like I wanted to stop and hide in a cave – even though some days I did want to do that, the reality is, my daughter was 4, I have to support her and myself – and Jimmy was just like, 'You just gotta leap.' I've always done that, but at that moment I needed someone to remind me. I was like, 'Yeah, that's what I'm going to do. I'm going to quit my job, move across the country with my four-year-old.' Everybody thought I had lost my mind. My mother definitely thought I was having a breakdown – she came with me, to just make sure. Jimmy reminded me about fearlessness and trusting your instinct. When we were acquired by Apple, I was sitting at the board table with Tim Cook and Eddy Cue, and Jimmy and Dre and Trent Reznor and Ian Rogers, and everyone turns and says, 'How are we going to market this thing?' You've got to step up. Even if it's a new thing and you don't even know what it is. My fearlessness in my craft was honed with those experiences.

A lot of marketing is about data analytics these days. As a company run on mobile devices, you have access to a lot of data. What's your view on how that shapes your communications?

My job is about emotion. My job is about feeling. This might be controversial to say, but I feel like sometimes data gets in the way of that. You start to see the numbers and say, 'Okay I need to track this way because that's what these numbers are telling me.' I'm trying to de-couple from what the data is saying and feel what people are saying. Data will lead you wrong if you pay attention to that and don't pay attention to people.

Uber has had growing pains with regulation in various markets – London most recently. There's been a fight with the taxi drivers here in Toronto. Does that complicate your job as a marketer?

Yeah, it does. Any conflict complicates the job. But I don't shy away from it. This is a disruptive brand. I can't act like this is ice cream. I have to embrace disruption and communicate that this is disruption for good – when it is good – and also work with my colleagues to make sure it's not disruption for bad. 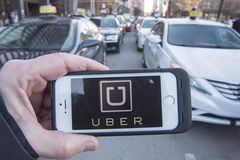