Canadian Tire Co. Ltd. has announced "one of the largest sets of sports partnerships ever undertaken in the country," signalling a huge marketing bet to position itself as Canada's retailer.

Roughly 5,000 employees gathered in the rented-out Air Canada Centre in downtown Toronto on Wednesday. Alongside entertainment such as the Canadian Tenors singing the Olympic theme song, I Believe, and a 45-minute private concert from Nelly Furtado, they also watched videos featuring some high-profile Canadian CEOs. Bonnie Brooks of Hudson's Bay Co., Royal Bank of Canada's Gord Nixon and BCE Inc.'s George Cope all sent messages welcoming Canadian Tire to the family – that tiny clan made up of the top-tier Olympic sponsors in Canada.

The company announced Wednesday it has joined those companies as a premier national partner of the Canadian Olympic Committee, along with a host of other new and expanded sports marketing partnerships.

The new eight-year partnership with the COC comes as Canada's retail landscape grows more crowded: Retailers here are preparing for the entry of U.S. giant Target Corp. beginning in March, and what will no doubt be a massive marketing effort by that new entrant. Canadian Tire has not only ramped up its national marketing imagery in recent months; the new partnerships also represent an attempt by the company to build more swagger into the brand as it prepares for the competition.

"We are Canada's company. We are the store for life in Canada. We're not on defence. We are on offence," chief executive officer Stephen Wetmore said in an interview. "We will expand, we will grow. We can beat anybody that comes into the country. And we're just trying to display it as proud Canadians."

The new partnerships are also a fit for the company's greater investment in sports retailing over the past two years. Canadian Tire purchased Forzani Group Ltd. for $771-million in 2011, and has been working to strengthen its Sport Chek and Sports Experts brands, which are also part of the sponsorship deal. Late last year, Forzani announced plans to buy Pro Hockey Life Sporting Goods Inc. for $85-million.

Canadian Tire nabbed the Olympic sponsorship from Rona Inc. after its deal expired at the end of last year, opening the door to another home retailer. Financial terms were not disclosed, but premier partnerships with the COC range from $4-million to $6-million a year, according to a source with knowledge of the deal.

Canadian Tire has been working toward this partnership for more than a year. It began discussions to replace Rona at meetings with the COC in London during the Summer Games last year. The company was focused on being able to integrate Olympic athletes into its overall brand efforts more closely, Mr. Wetmore said.

Sponsorship deals with individual Canadian amateur athletes are on the horizon as well, Mr. Wetmore said. The company signalled this move, he said, with its recent television commercial, Let it Snow, which began airing before Christmas and featured Canadian Olympic athletes such as Jon Montgomery, the 2012 gold medal winner in skeleton racing.

On Wednesday, the company released a new ad on YouTube celebrating the announcement.

The next round of Canadian Tire and Sport Chek flyers will be stamped with the Olympic rings, and the company is now three meetings into a discussion with the CBC to invest in advertising during the 2014 Games in Sochi, Russia, to ensure that there is awareness of the sponsorship.

But the company does not intend to market its Olympic connections only every two years. "There's no reason you can't do a kitchen spot with athletes talking about healthy living and healthy eating. There's no reason why you can't do an outdoor yard spot with two guys competing on who's going to have a better lawn," said Duncan Fulton, head of communications for Canadian Tire and chief marketing officer at Forzani Group. "… I think you'll see a theme of sport played through the company, not just in the sports category. It will infuse the hundreds of millions of dolla rs in branding that we do on an annual basis."

With its deal, Canadian Tire adds to existing partnerships such as NASCAR and the National Hockey League, and individual athletes including hockey stars Sidney Crosby and Jonathan Toews and Blue Jays player Brett Lawrie.

Canadian Olympic Committee president Marcel Aubut called the sponsorship a "big win" for his organization. At the event on Wednesday, he told Mr. Wetmore, "You won't regret this."

"Sports plays such an incredible role in the psyche of Canada and all of us," Mr. Wetmore said. "To have Canadian Tire associated with these partners where the majority of Canadians learn to play sports, whether it's soccer or riding their bike or playing hockey … it was a natural area, I believe, for Canadian Tire to own."

Soon enough, at your local Canadian Tire store, your friendly cashier or stockboy may be an Olympic athlete.

Along with its new multimillion-dollar sports marketing sponsorships announced on Wednesday, Canadian Tire Co. Ltd. announced an employment program for employee athletes in training. It will soon launch a website where athletes can communicate their location, to be placed in flexible work placements across the company – whether at its network of stores or in the corporate offices.

Because training schedules take athletes to different parts of the country and eat up large chunks of their time, it can be a challenge for many amateur athletes to maintain an income, or gain job experience for a life after competitive sports, Canadian Tire Co. Ltd. chief executive officer Stephen Wetmore said.

"I think if somebody has the kind of reach that we have across the country, to nationally accommodate it and be flexible enough, we should," he said. "If they're in a centre where we have more than stores, then they could be working in a variety of projects with us. And maybe get some training toward a career."

And in smaller centres, they might just don a red shirt and take to the local aisles.

"It's quite possible," he said.

Editor's Note: A story in the Report on Business on Thursday suggested that Bonnie Brooks, Gord Nixon and George Cope were on hand at a Canadian Tire event in Toronto to congratulate the company on a new sponsorship deal. Those executives actually sent messages by video. 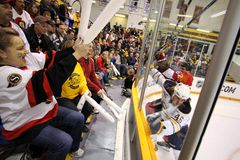 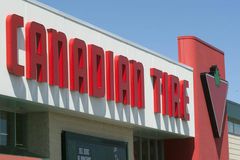