Once a year, a handful of U.S. advertisers go on a spending spree, shelling out millions of dollars and competing for viewers' divided attention during the Super Bowl – at least in the U.S. broadcast. Many of the buzzworthy ads won't show up on Canadian TV screens.

It isn't just a pay day for the network that carries the big game; it's also a nice chunk of change for celebrities.

Once companies who have spent huge on big game airtime, their  job has just begun: in order to make the investment pay off, they have to get noticed. A popular way to do that is to load up their ads with recognizable faces. Here are some of the movie stars, musicians, and even Muppets who will be lending their fame to advertisers' efforts this Sunday. 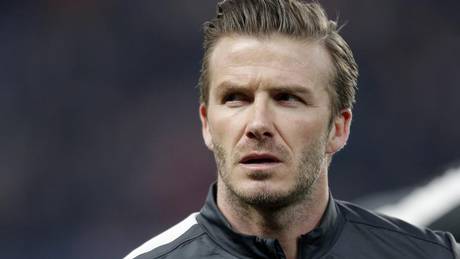 Even though a scantily-clad Mr. Beckham failed to give a boost to his underwear line for H&M in 2012, the retailer is trying again this year. But the real star of the commercial may be the technology in it: H&M has partnered with Delivery Agent Inc. to make it possible for viewers to buy items in the commercial right off their TV screens. Now, that’s only possible for people who own certain Smart TVs made by Samsung, so it’s hardly an experience that will reach the masses this time. But it still marks a step forward: and a look at where TV advertising could be heading.

The champion of truthiness will star in an ad for Wonderful Pistachios, which last year hired Korean pop star Psy for its game day commercial.

Terry Crews and The Muppets

The former football player-turned commercial star did a number of ads for Old Spice in recent years, and will gain some fuzzy co-stars in a big-game spot for Toyota that doubles as a promotion for the new Muppets movie.

The actor will reprise his role of Morpheus from The Matrix.

The Big Bang Theory Star and the comedian both make an appearance in one of Hyundai’s ads.

This will be the first commercial in a multi-year deal Ms. Johansson has signed with Sodastream, a machine tomake soda water at home. The company is wringing extra promotional weight out of the claim that Fox, which is broadcasting the game in the U.S., forced them to edit out the line “Sorry, Coke and Pepsi.” Sodastream has a history of this kind of promotion: it made hay in 2012 thanks to a U.K. ruling against an ad that showed bottles of pop exploding in a warehouse. The same commercial aired last year during the Super Bowl, but the company claimed another ad featuring competing Coke and Pepsi delivery men was rejected by CBS. It is a popular tactic for advertisers to gain attention by claiming their ads were too risqué or controversial for TV.

The mention of its competitors was not the only controversy. SodaStream has attracted criticism for the fact that the Israeli company operates in a West Bank settlement. This week, critics demanded a response from the nonprofit Oxfam International, for whom the Ms. Johansson has worked as a global ambassador. On Thursday, the actress resigned her role with Oxfam over a "fundamental difference of opinion."

Jaguar USA has announced that its first-ever Super Bowl commercial will feature “British Villains” – Mr. Kingsley recently played a villain in Iron Man 3, Mr. Hiddleston was Loki in the Thor movies as well as in The Avengers, and Mr. Strong played Lord Blackwood in Sherlock Holmes in 2009. “In the world of pop culture, villains disrupt the status quo and challenge the establishment, while living one step ahead of, and better than, the pack,” the company said in a statement, explaining the campaign.

Jaguar’s offering is also notable for how much content it is producing around the Super Bowl: there is a British Villains website, a sponsored movie night on IFC with two films featuring British baddies, sponsored articles produced by Gawker, a sponsored video series for Sports Illustrated looking at sports villains, and even a British music playlist running on streaming music service Pandora Radio called the GoodToBeBad Mixtape.

Cancon alert. The Canadian chanteuse appears in the big game ad for Audi, which has created a freakish creature, the Doberhuahua, to push the message that the automaker hates compromise. (and an online extra, where she stars in a faux public service announcement for a neglected dog breed.)

The auto racer is back, and shilling as usual for her sponsor GoDaddy. But happily, this year, the brand has veered away from the stupid, demeaning portrayals of women it has become known for in ads that appeal more to the women who run businesses and buy domain names – possibly from GoDaddy, now that they’re less offended.

Bud Light is promoting a Super Bowl spot that says it used 412 actors and 58 hidden cameras to do something special for one guy. Multiple ad teasers featuring the three stars (and a llama named Lily) have already been posted online, with promises that a fourth celebrity will also appear.

The boys from the ‘90s sitcom “Full House” were reunited in both the teaser for Dannon’s Oikos commercial and in the commercial itself (which is mostly gross, and saved only by the too-short appearance of the show’s goofier brothers.)

GoDaddy’s second ad in the big game will star the actor and a real woman who plans to quit her job live during the game to follow her dream of starting her own business.
YouTube

The quarterback, who currently does not have a contract with a team, is helping T-Mobile to advertise the benefits of ditching your current wireless contract.
Page 1 2 3 4Next