The second goal was in, the fight for gold in women's hockey was tied, and a member of Mondelez Canada's marketing team was all worked up.

"Go, go, go," blurted Stephanie Minna Cass. But she was not talking to the hockey players on the screen – at least, not at that moment. Standing in the "war room" at one of the packaged goods company's advertising agencies, DraftFCB Toronto, she was approving a message for Oreo to post on Twitter. 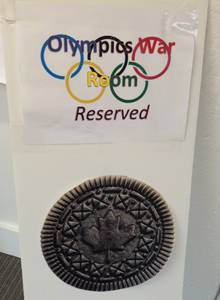 It was just one such room that Mondelez's Canadian agencies have set up to work in real time, responding to the Olympics.

With a brand-new sponsorship inked this year with the Canadian Olympic Committee, the company has undertaken an unprecedented effort to win over Canadian viewers tuned in to moments such as this one – not just on television, but on "second screens" such as mobile phones, tablets and computers, where they are reacting to all the excitement on Twitter and Facebook.

After Team Canada's women pulled themselves out of what looked like a losing position with a goal in the third period, DraftFCB creative group head Jeff Hilts started sketching. The table in front of him in the Oreo war room was littered with crumpled paper containing discarded ideas. Just moments earlier, the agency had sent out a tweet calling the game "a nail-biter" (and encouraging people to bite into a cookie instead). 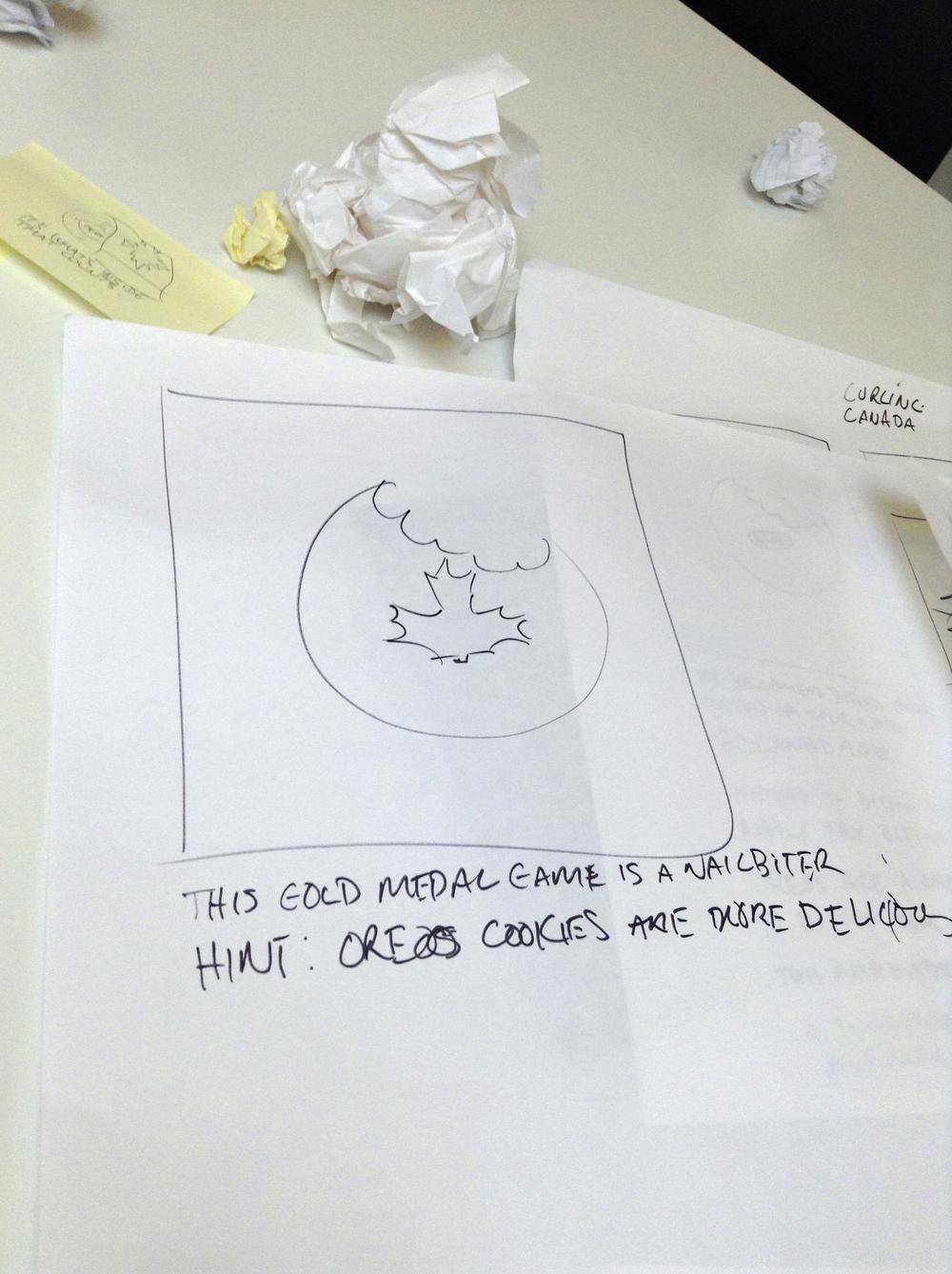 Now, sensing that a turnaround might be in the works, he wrote up a new post – "Recipe for gold: 1 part skill, 1 part heart, 1 part awesome comeback" – and after the second goal went in, a fellow copywriter showed it to the cheering client, Ms. Cass. 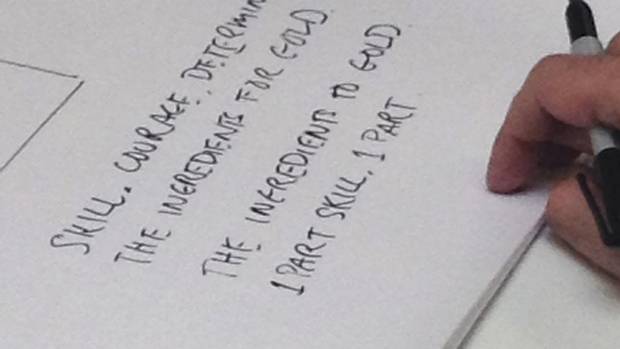 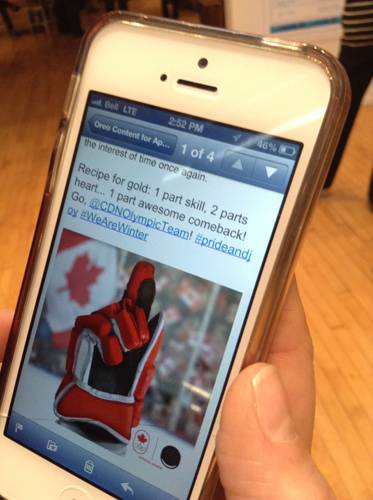 This is the new speed of marketing. Oreo was the brand that proved the power of real-time response during the 2012 Super Bowl, when it won free attention with a quick response to a blackout in the stadium. It received so much coverage, the company estimates that the tweet generated 280 million "impressions" (advertising speak for views of an ad) outside of the digital world.

Since then, Mondelez's brands have been throwing more weight behind real-time marketing, including in Canada. These Winter Games are the biggest stage yet for the company's brands to become part of the conversation here.

There's a good reason for that: Mondelez regularly watches its return on investment based on analysis from research firm Nielsen, which shows the ratio of sales dollars to dollars spent on advertising and promotional activity. When their traditional advertising (such as TV) is paired with digital and social media efforts, they see a jump: Campaigns are generally two times as effective for their money.

"Consumers spend approximately 58 per cent of their time on digital globally, yet media spend within the [consumer packaged goods] industry is misaligned with how consumers spend their time," Ms. Cass said.

The effort began in 2012 when the Oreo cookie turned 100. In the U.S., the brand worked with its digital agency 360i to develop a "daily twist" campaign that tweeted out a different message every day. The campaign increased the amount of times that people shared those posts with their own friends on Facebook by 280 per cent. Shares via "retweet" on Twitter jumped 510 per cent. And comments on those social media posts were 67 times higher than average.

That kind of organic activity is particularly important for brands because social media has given consumers a platform to make their voices heard on the kind of mass scale that used to be reserved for media outlets or companies with the budgets to advertise widely. Now, the goal is to create something for a brand that people will like enough to share themselves; like word of mouth, but louder. Much louder.

Consider the fact that, as of Thursday, people worldwide had posted 26 million tweets about the Olympics since the Games began, and the opportunity for marketers is obvious.

Mondelez's day began at 6 a.m. in another war room at PR agency Edelman, preparing for an early-morning call with all of its agencies to plan out its social content for the day. Along with DraftFCB, executives were speaking with OgilvyOne, the agency in charge of Ritz crackers and Cadbury, and Tribal Worldwide Toronto, which handles Dentyne.

The Edelman team manages all these moving parts, sending out updates about Canada's wins; suggesting which brands might be best to comment on which events; and crucially, checking to be sure messages align with COC brand rules and do not raise any legal concerns.

For example, Mondelez's brands cannot tweet at Olympian athletes by name, or use most images of the athletes themselves in their posts.

That is because doing so could imply sponsorship of those individual athletes, which is not part of the company's deal. (Other brands such as Canadian Tire Corp. Ltd., which does sponsor individual athletes in addition to its COC partnership, have more freedom to use those athletes in their ads – and those rules extend to social media.)

So the team has had to use the power of suggestion. They noticed a tag that had become popular on Twitter to praise the lush facial hair of the Canadian men's bobsleigh team – #beardmode – and sent out a message with a cartoon beard on an Oreo cookie.

It sounds unappetizing, but it inspired a response from bobsledder James McNaughton himself. That was a win for the brand and a precious bit of free advertising from one of the people consumers are rooting for right now.

Brands can also skirt the individual sponsorship rules by picking up on the COC's posts. When the committee tweeted a picture of Olympic couple Charles Hamelin and Marianne St-Gelais celebrating Mr. Hamelin's gold with a kiss, Dentyne Canada retweeted it. It was a fit for the brand, which has focused its marketing on references to romance (and its attendant activities).

What a kiss. Either he won a #gold medal, or had irresistible breath. Probably both. RT @CDNOlympicTeam #WeAreWinter pic.twitter.com/DQAMgwHwKR

Everything has to be co-ordinated. During the visit to DraftFCB, Mondelez Canada's senior manager of digital design, Tara Haase, was on her mobile phone with the team at Edelman making sure its messages could be approved so that the agency could respond quickly to the women's hockey game. And DraftFCB's social media strategist, Helen Androlia, was preparing to press send. 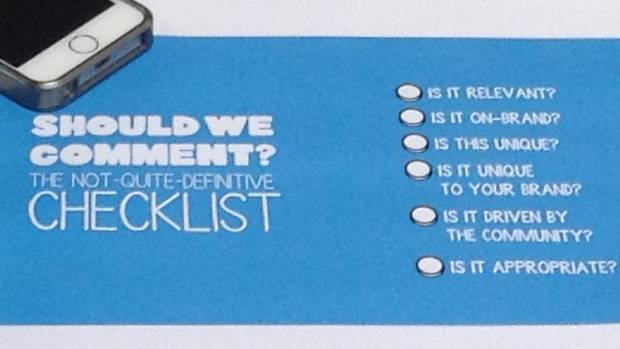 By the time Canada's overtime goal hit the net, everything was ready to go. As the employees who had left their desks to watch the game jumped up and down, several voices rang out among the cheers: "Helen!" Ms. Androlia, manning the Twitter feed, immediately shouted back.

For a global brand, sponsoring a specific country's Olympic team – and doing so publicly on social media – could seem like a risky proposition.

For Mondelez, this problem is partly solved by the fact that all its brands have Canada-specific Twitter accounts. All of them, that is, except for one.

Oreo mostly uses just one global account, including when it praises Canadian Olympians. Those messages are not particularly relevant, or necessarily welcome, among consumers elsewhere. So Mondelez uses what is called "narrowcasting." That allows advertisers to target Twitter messages by geography. Multiple accounts for different countries are not required; country-specific messages can just be filtered down.

Mondelez was the first company in Canada to use that feature on Twitter, and has made use of it during these Games.

(Editor's note: An earlier online version of this story incorrectly attributed a tweet sent out by the Oreo brand team to ad agency DraftFCB copywriter Joseph Vernuccio. The author of the tweet was creative group head Jeff Hilts.)