When McDonald's Corp. in the U.S. asked Twitter users earlier this year to tell their "#McDStories," it did not expect to hear about alleged incidents of food poisoning, hair in the food or the infamous "pink slime." But the case study for marketing classes in social-media blunders did not stop McDonald's Canada from launching a campaign to address those criticisms head-on.

The fast-food chain's "Our food. Your questions" campaign began in June with a digital-only project asking people to pose their questions to the company through Facebook, Twitter, and a new website. Four months and thousands of inquiries later, the company began airing a television ad on Sept. 24 to promote it more widely.

The campaign is designed to help McDonald's foster a message of transparency, and is a chance for the Canadian operation to recoup its image within social media. Like many marketers, McDonald's is becoming aware that it has turned over some of the control of its brand to customers – and critics – that use digital media to put out their own, unauthorized messages.

"We have to be engaged in that conversation and not just let that dialogue take place without our involvement," McDonald's Canada chief marketing officer Joel Yashinsky said.

The four-week campaign includes the television ad, and outdoor ads on the street in urban centres and in transit systems.

A few months after it was posted online, a video showing how pictures of the chain's food is manipulated to look more appetizing in ads is the fourth most popular Canadian-made ad on YouTube, by view count. The highest spot is still held by the legendary "Evolution" ad for Dove, which showed how a relatively normal-looking woman can be photoshopped to unreal beauty standards. A similar message of authenticity is behind the McDonald's ads, but with blemish-free hamburger buns and cheese rather than enhanced cheekbones.

According to Mr. Yashinsky, the campaign was not so much targeted toward McDonald's haters but toward "fence sitters" who, while they don't boycott the burgers, might be more hesitant to visit the chain because of the negative messages they hear.

TribalDDB Canada, which was hired as McDonald's digital agency of record a year ago, spent two months doing research earlier this year using a social media "listening" program called Sysomos. That helped them to gauge the type of conversation already taking place.

"The worst possible stuff that consumers could invent – 'Why doesn't your burger rot?' There's 20 or so pretty common ones that people tend to glom on to because it's either visually appealing, in the negative way, or just a popular myth," said TribalDDB managing director Andrew McCartney.

Starting with an online-only campaign in the summer allowed the company and its agency to build a base of content (15 video responses in English and French so far) before spending considerably more money, and attracting more attention, via a wider media campaign. Until last week, McDonald's Canada had received 6,000 questions. Since the TV ad launched last Monday, it has received another 4,000.

Advertising agencies see their clients asking for more online work, partly because an ad can be measured more precisely, in real-time, and tweaked if research shows that for example, viewers are clicking on something else at a certain point.

Another issue is fuelling the trend to online work: tighter advertising budgets. The world's biggest advertiser, Procter & Gamble Co., has said it wants to cut $1-billion (U.S.) from its marketing budget by 2016, and will do that partly by relying more heavily on digital advertising, which costs far less than traditional media such as broadcast TV.

In Canada, spending on Internet advertising is expected to reach $3.1-billion in total this year, an increase of 17 per cent compared to last year -- and is predicted to overtake spending on TV ads next year, according to the latest Advertising Expenditure Forecast released this week by ZenithOptimedia.

TribalDDB helped build the digital side of the campaign with YouTube homepage takeovers this summer. The more popular videos also received some attention from high-profile U.S. blogs. That increased followers of the corporate Facebook and Twitter accounts. Now that it has a social media success to take some of the attention away from its earlier fiasco, McDonald's is looking at moving the campaign beyond Canada.

McDonald's Canada has so far only answered a small fraction of the thousands of questions customers have asked about its food. Those answers have attracted quite an audience. Here are the most viewed instalments of the campaign so far:

"Why does your food look different in the advertising than what is in the store?"

"Does your Egg McMuffin use real eggs?"

"Is McDonald's beef rinsed in ammonia or any other type of chemicals to ensure that it doesn't contain E. Coli bacteria?"

"Why is the food at McDonalds so cheap?" 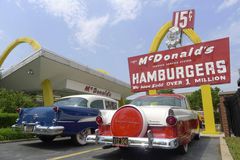