Lindsay Cook is a walking advertisement.

One would expect nothing less from the director of marketing for Joe Fresh. Stepping out for a coffee near the Joe Fresh offices in Toronto's Liberty Village neighbourhood, the 29-year-old is outfitted in the brand, from top-not-quite-to-toe: the leopard-print loafers are Nine West, she notes somewhat sheepishly before quickly adding, "We have great shoes."

Ms. Cook's energy for pitching the brand led to her being honoured on Thursday night as a "Marketer on the Rise" at the Marketing Hall of Legends gala. She is one of three young marketers receiving the award for the very first time.

"We're honouring our legends – it's really important to have people to inspire you to get to the end of your career – but it's also great to recognize people who are already on their way," said Craig Lund, president of the Toronto chapter of the American Marketing Association, which hosts the event.

Ms. Cook got her start with Loblaw Cos. Ltd. when she landed a summer job at its corporate headquarters during university, and returned shortly after graduating to work full-time in 2007. Just two years after moving to the fashion side of the business with Joe Fresh, she was promoted to her current position last year and has had her hands in everything from the brand's expansion to the U.S., to preparations for Target's push north.

How would you identify the Joe Fresh brand identity?

Our marketing aesthetic is really clean and crisp. Traditionally, when the brand launched in our grocery stores across the country, we obviously were catering to that 25 to 44 demographic, focusing on mom. Since we launched our standalone [store] concept both in Canada and the U.S., we've seen our age demographic expand a bit. We are seeing a bit of a younger customer … which is cool. That's another dimension to the brand.

How do you juggle marketing a brand for moms, and making it seem fashionable for a younger customer?

It's a great question, because as the brand has evolved, the marketing has had to evolve. … We find in the urban market we can push the boundaries a bit with the fresh off the runway collections. They're a little more accepting of that higher price point …Whereas our grocery store customer, they still appreciate the fashion, but it really is about value in that space because they're likely combining that purchase with the grocery basket. … We have started to see that the channels require a little bit of tailoring.

You were very involved in the U.S. expansion last year.

Yes, it was very busy last year. What we've come to appreciate here in Canada is, everyone knows who we are. We were starting our launch into the U.S., and we had to figure out how to introduce ourselves. … One of the awesome things we did was open up a pop-up shop in the Hamptons in the summer leading up to our fall launch. It was really about tapping into that influencer crowd. The New York market's very different. It's a very saturated market. It was about trying to reach them, get them engaged ... We had one woman tweet that she walked in wearing her Oscar de la Renta and walked out wearing a Joe Fresh dress. It was great.

Why has the pop-up store become such a common marketing tool?

As a marketer, you can sit around a table and come up with an awesome idea, but it's all about how it's received by the customer. The thing about a pop-up shop is you're there, you get to decide for yourself. You can't put a smokescreen in front of that and try to sell it as something else. It's an interesting way to get people interacting with the brand.

How are the U.S. locations performing?

Great. Everyone's very pleased. But we're only six stores down there; about to be 700 with J.C. Penney in March , which is really exciting. It's about continuing to build brand awareness, really trying to build traffic into the stores and keep that momentum going.

Is the career path changing for young people starting out in marketing?

For a lot of people coming in, I don't think there's that strict definition, "Go to business school and here are your options" – especially in marketing, because it is constantly changing. With digital and social media becoming a huge influence in our space, it's forcing people to think outside the box. That's why I think a plethora of different backgrounds and experiences really adds to that. … It's not rocket science. I don't say that to belittle marketing, because it's a fantastic field; I fell in love with it. What I mean is that if you truly are passionate and love what you do, that's what shines through. It really is all about being part of a brand and a culture that inspires you, and makes you want to push the envelope and try new things.

What was your first exposure to marketing on the Loblaw side, before Joe Fresh?

It was label redesign, when the government changed its regulations on disclosing nutritional information on packaging, all our products had to go through a huge overhaul. … It opened my eyes to a lot of things. It really gave me an inside look to our private label, and starting to think, I wonder how the shopper does shop, and what are they looking at? Grocery shopping was just becoming something I was starting to do on my own at that point in time. … I got to sit with my manager and look at where we wanted to change it, because it was going in for redesign anyway, did we want to update the packaging, change things, change colours? … When I went back to university after that summer, no one wanted to go grocery shopping with me because we'd be in there and I'd be like, "See that? I helped with that."

Now you have led the expansion of home and entertainment and lifestyle products in the grocery stores?

We totally redefined that space from top to bottom. From a marketing standpoint it was a dream because we got to wipe the board clean, and think what do we want this thing to say? We … followed the same aesthetic as Joe – just really clean, crisp and modern. The less-is-more approach. We spent about a year and a half massaging it into just under 30 stores. There were kinks along the way, but that was an opportunity to fix it, and now it's rolling out to over 100 of our stores across the country. … I get so excited, seeing the before and after.

With Target coming up, that must be a pressure point dealing with that redesign, and also getting the Joe stores ready for new competition.

Absolutely. It would be silly not to watch them and see what happens when they burst on to the scene. But we've got a really strong foundation with what we do here. I think it's just about continuing to do what we do really well, and focus on that. It's an exciting time for sure. 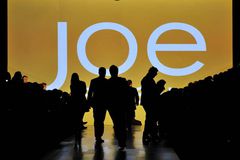