Lululemon Athletica Inc. , the Vancouver-based retailer of choice for yoga devotees who want to strike a fashionable pose while attaining a higher state of being, is interrupting the positive energy flow of some of its most loyal customers by promoting a controversial novel by Ayn Rand.

In late October, the company began using shopping bags with the words "Who is John Galt?" a catchphrase from the 1957 novel Atlas Shrugged, which rails against government and advocates self-interest as a key ingredient of a better world.

The company also added the book to its staff reading list.

In recent years more companies have taken philosophical stands in their marketing, but most embrace charitable and community-oriented causes, rather than Rand's every-man-for-himself point of view.

A post on the official Lululemon blog explains that the company's founder Chip Wilson, who read Atlas Shrugged at 18, was inspired by its encouragement to "elevate the world from mediocrity to greatness."

"Many of us choose mediocrity without even realizing it," declares the blog, written by a staff member in the company's Vancouver headquarters. "Why do we do this? Because our society encourages mediocrity. It is easier to be mediocre than to be great."

The post concludes: "Our bags are visual reminders for ourselves to live a life we love and conquer the epidemic of mediocrity. We all have a John Galt inside of us, cheering us on."

But a Rand expert says the blog post displays a misreading of the author's philosophy, known as objectivism. "She wouldn't put it as an issue of living life fully or mediocrity," said Onkar Ghate, a senior fellow at the Ayn Rand Institute in Irvine, Calif. "It's between pursuing your own happiness and self-interest and understanding why that pursuit is right, and to regard that pursuit as noble versus a society that regards it as wrong and ignoble."

"It's a clash with yoga values," said Sarah Kurchak, 29, who has about 15 pieces of Lululemon clothing in her wardrobe.

Two weeks ago, she was about to purchase a new pair of pants when a friend who knew her anti-Rand position told her of the "John Galt" shopping bags.

"That was the last straw," she said, noting she had become increasingly disenchanted with the company after reading of its embrace of Werner Erhard's controversial Landmark Forum, and its 2007 run-in with the Competition Bureau that forced it to back down on claims that some of its clothes contained an ingredient with therapeutic attributes.

"I don't want people looking at me with that little logo on my pants or on my hoodie and thinking I'm going home to read Atlas Shrugged after, you know, downward dog," Ms. Kurchak said.

"A lot of people are going to read that post and go, 'Yeah, I hate mediocrity, too, I'm gonna buy another pair of $100 yoga pants!' Whereas in reality it is saying a lot of things a lot of yogis I know don't support."

Lululemon refused to comment on the Rand initiative, or to elaborate on its view of objectivism, but a media representative said in an e-mail, "We include these statements on our [bags]to create conversation among our guests."

The statement has certainly sparked a lively conversation. Many people on the Lululemon blog applaud the move, but others are incensed. "You know who else loves Ayn Rand?" asks one commenter. "The sick, selfish Republican creeps like Paul Ryan and Eric Cantor. I will shop elsewhere."

Another commenter wrote: "Rand's philosophy is totally incompatible with the roots of yoga, but I suppose it makes sense for a conceited sportswear entrepreneur seeking full license to screw over anybody he wants to in pursuit of a buck." 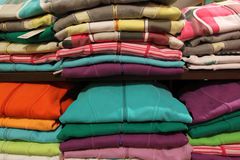 This column is not about advertising
May 8, 2018
Follow Simon Houpt on Twitter @simonhoupt
Report an error Editorial code of conduct
Due to technical reasons, we have temporarily removed commenting from our articles. We hope to have this fixed soon. Thank you for your patience. If you are looking to give feedback on our new site, please send it along to feedback@globeandmail.com. If you want to write a letter to the editor, please forward to letters@globeandmail.com.
Comments