This is a marketing story about someone who didn't really like marketing.

Over the next few months, as dozens of charities extend their hands to Canadians during the annual fall fundraising season, countless corporations will trumpet their partnerships with those organizations: the Canadian Breast Cancer Foundation's annual Run for the Cure on Oct. 3 boasts CIBC as its co-called "title sponsor," with lesser support by companies as diverse as New Balance, East Side Mario's restaurants, and Revlon; Enbridge is supporting the United Way of Toronto's CN Tower climb later that month; and the city's Centre for Addiction and Mental Health (CAMH) Foundation will be the beneficiary of this year's annual Bell Celebrity Gala on Oct. 14, which counts Samsung, Blackberry, IBM, and BMO Financial Group among its major sponsors.

Yet amid the clutter of causes and corporate logos, one of the highest-grossing Canadian charities remains almost alone in its wariness toward commercial enterprises. The Terry Fox Foundation, which has raised approximately $500-million since its inception and this week announced fundraising initiatives around the thirtieth anniversary of the iconic Marathon of Hope run, says it does not accept corporate sponsorship.

"Terry was all about fundraising for cancer research, and he didn't want companies to directly profit from any kind of association with him," explains Brett Kohli, the Foundation's national director.

But when is a corporate sponsorship not a corporate sponsorship? Legend has it that Mr. Fox refused numerous entreaties from corporations through the spring and summer of 1980 to buff themselves with his image. Still, he did accept some support, including a van donated by Ford and shoes supplied by adidas, but neither company trumpeted its association at the time.

Marketers certainly realized quickly how valuable a property Mr. Fox could be: A few weeks before the Marathon of Hope run ended prematurely, Twentieth Century-Fox and the movie exhibitor Famous Players Ltd. announced they would donate half of their proceeds from the sale of a $2 Empire Strikes Back keychain - available exclusively at one downtown Toronto theatre - to the Canadian Cancer Society in support of the run. Lou Fine, the district director of the Canadian Cancer Society, told The Globe during Mr. Fox's run, "He's an image. Let's face it, when he can draw these crowds with tears in their eyes, he's a born salesman."

Thirty years on, Mr. Fox's stance towards corporations seems admirably quaint, especially given how much the cause marketing environment has intensified. (In one illustration of the difference between 1980 and today, when corporations regularly demand category exclusivity, which precludes competitors from offering similar sponsorships, the Ford Econoline van in the Marathon of Hope's motorcade was joined by a motor home from General Motors.) Six years ago, the Association of Canadian Advertisers created the Sponsorship Marketing Council of Canada with the stated mission to "help advertisers who use sponsorships as part of their integrated marketing communications strategies get the maximum return on their investments." Companies may pay lip service to the desire to be "good corporate citizens," but shareholders insist the financial outlays pay real dividends.

The crowded field can lead to some strange bedfellows. McDonald's helps dodge the charge of encouraging obesity with its long-time support of the Olympics; the sponsorship is so successful that people only occasionally remark on the dissonance between the restaurant chain's high-sodium, high-fat offerings and the biannual celebration of supreme athletic achievement. Similarly Coca-Cola, another Olympics sponsor, raised only a few eyebrows earlier this month when it announced another phase in its support of the national fitness program Participaction.

Further proving the growing importance of cause marketing, the latest Consumerology study of consumer attitudes by the advertising agency Bensimon Bryne, released this week, focuses on corporate social responsibility (aka CSR) and social marketing. The study suggests that, while some corporations that choose popular causes (like breast cancer) may not be getting enough bang for their bucks, there are plenty of causes with lower profiles (organ donation, safe streets) that could be leveraged by savvy companies looking to make a mark in an uncrowded field.

Still, the study also suggests there might be entirely too much focus on the importance of CSR activities: Fully 37 per cent of Canadians said companies pairing up with causes doesn't affect how they feel about either the company or the charity.

But sometimes companies have to tread with extreme caution. On Thursday morning, the Terry Fox Foundation held a press conference in Toronto to announce a fundraising initiative, launching next week, involving the online auction of 30 pairs of adidas Orion TFs (replicas of the shoes Mr. Fox wore during his run) that have been signed by 28 Canadian Olympic and Paralympic athletes. Adidas Canada has also sent 75,000 donated pairs of commemorative shoelaces, to be sold for $5 each, which carry the name of each city where Mr. Fox stopped during his historic run. An ad campaign created and paid for by adidas kicks off today.

In making the announcement, Steve Ralph, the head of adidas Canada, which has donated about $1-million through the years to the Foundation, said Mr. Fox is, "an iconic hero, and he really reflects a lot of brand values that our company, adidas, has. Those values of commitment, passion, authenticity - I didn't meet Terry, but I'd say - 'genuine' and 'real.'"

If his statement struck some observers as cringe-worthy, Terry Fox's mother Betty didn't seem to notice when, to warm applause, she stepped up to the microphone a few minutes later and walked the Foundation's uniquely fine line on corporate sponsorships.

"We will not allow any commercialization around Terry's name," she began. Then, continuing: "Yes, we're giving it today, but we're giving it to a company that has asked for nothing in return. And God bless them for that. They have been fabulous to Terry, they've been fabulous to the Foundation. And what more but can we say other than 'Thank you' - which really isn't enough for a company like adidas, who have demonstrated a true kinship with Terry's philosophy."

Adidas would like to intensify the relationship, but says it has not pushed the Foundation to do so, and will not. "They're taking the lead on this one," Steve Ralph said in an interview. Still, adidas believes the evolution of the marketplace may necessitate the Terry Fox Foundation embracing some new form of marketing.

"If you look at what our retail partners are looking for, it used to be you sold collections in stores. They're looking to sell stories now. The World Cup is a story, (Lance Armstrong's cancer fundraising organization) Livestrong is a story, the Olympics is a story," said Mr. Ralph.

Today, he added, "it's hard to create legacies, just because everything moves so fast."

"That's one of the neat things about the whole Terry legacy: It just endures." 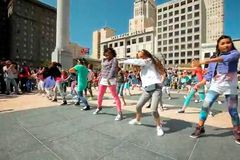