The company behind the golden arches has spun marketing gold in Canada in recent years with one message: We will answer your questions.

Starting in 2012, McDonald's Canada invested heavily in an advertising campaign called "Our Food. Your Questions," which was designed to combat negative perceptions of the fast-food giant identified in consumer research, including feelings of shame and anger associated with the brand. The campaign drew millions to the McDonald's website and saw a 65-per-cent increase in followers on social media channels in just the first six months. It also significantly increased positive associations with the food and the company itself, according to the company's research.

"No question was too tough or raw for McDonald's to answer," boasted a submission for an advertising award.

Read more: McDonald's puts pressure on competitors in the battle for breakfast (for subscribers)

But now that carefully cultivated image of transparency is in jeopardy – all because of an unanswered question: Why?

Last week, McDonald's Canada announced that it would add nuts to menu items across the country, ending its long-standing reputation as a nut-safe zone. The backlash was swift. Customers took to Twitter and Facebook to complain about the change – and about the lack of responses to their comments and questions.

On Monday, Food Allergy Canada, a non-profit advocacy group for people with allergies, launched a campaign objecting to the changes and requesting a meeting with the company. It included digital and social media communications and a full-page advertisement in The Globe and Mail, all asking, "Why?" and using the McDonald's trademark arches turned upside-down to form the W.

McDonald's declined requests for an interview for this article. In a statement earlier this week, the company said "this is about a holistic change to our business," adding that it had been transparent in warning customers about the change.

It did not answer questions about the business rationale – whether the new policy is intended to drive efficiencies in the company's supply chain or food-preparation process; whether it is a matter of demand for new flavours and menu items; or other considerations.

On Tuesday, following the Food Allergy Canada ad, the company contacted the group and set up a meeting next month with McDonald's president and CEO John Betts to discuss the issue.

In the United States, McDonald's Corp. has faced pressure in recent years to address slowing revenue growth amid increased competition from convenience and grocery stores and a rising tide of health-conscious consumers. The introduction of all-day breakfast in the United States in 2015 helped boost sales, but this week the company reported that revenue at established locations in the United States fell for the first time in six quarters.

For its part, Canada, home to some 1,450 McDonald's locations, is part of a group of countries – including similar markets such as the U.K. and Australia – that have been a bright spot for the company. Same-store sales – a key retail metric – in these countries have outperformed McDonald's locations in the United States and have served as launching pads for new technologies such as self-serve kiosks and smartphone ordering systems. And Canada could be in for a further boost from the introduction of all-day breakfast in February.

Whatever the reason for its implementation, the disconnect between the new nut policy and the company's past marketing messages presents a challenge for what has traditionally been an exceptionally savvy PR machine.

"This feels off-brand and off-strategy," says Charlie Wilton, a partner at Sklar Wilton & Associates Ltd., a Toronto-based market research company that has worked with brands such as Heinz, Maple Leaf Foods and Canadian Tire.

"They've done a wonderful job in the past with the open forum with people asking questions. They've gone to great lengths to demystify the mystery in so-called 'mystery meat' and to talk about their products," Mr. Wilton said. "In today's world, people want straight answers and straight talk."

While "Our Food. Your Questions" is no longer an active marketing campaign in Canada, McDonald's still contends with a social media-driven environment in which customers expect companies to be answerable to them. Food Allergy Canada's campaign was inspired partly by the advocacy work on forum MoveOn.org, asking people to sign a petition and tell the company how the change affects them. By Friday, the petition had gathered more than 6,600 signatures.

The group's strategy was to avoid demonizing McDonald's and instead ask for further discussions on how the company could manage the change and give people with allergies enough information to make safe choices in its restaurants. Rather than a blanket statement that every product "may contain or come into contact" with nuts, the group is asking McDonald's to consider processes to manage cross-contamination where possible.

"Having nuts loose as opposed to contained in packets, I suppose they decided that was more economical. But I think they're looking at the economic reasoning the wrong way," said Phillip Haid, CEO of Toronto ad agency Public Inc., which created the Food Allergy Canada campaign. Mr. Haid is also a board member at the advocacy group and has two sons who live with allergies – one to shellfish and the other to tree nuts. "When you go to a restaurant without specific [allergen] guidelines, the whole meal you're on edge. The ability to go to McDonald's and not worry is so nice. You feel at home. From a reputation standpoint, why would you turn your back on a community that embraced you?"

While a relatively small percentage of Canadians will be affected – roughly 2 per cent have peanut allergies and 2.4 per cent have tree nut allergies – their numbers swell when factoring in the family and friends who eat out with them, Mr. Haid said. Communicating with them is not just a nice thing to do; it could also be good marketing.

"Why wouldn't you want to have good policies and practices in place so you can reap the benefits of that consumer?" Mr. Haid said. "We're not saying, 'Be a good corporate citizen.' We're saying, 'You've got a loyal brand following. Why would you want to alienate them?'"

In its guide for food-service companies, industry association Restaurants Canada recommends that businesses give consumers information that will help them make "informed" menu choices. "With the growing number of patrons being affected by food allergies, it is essential that food-service and restaurant operators recognize the importance of providing clear and accurate information about the food they prepare and serve, which will go a long way to building customer confidence and loyalty," the guide reads.

Brand consultant Mr. Wilton cautioned that the recent introduction of a law requiring calorie counts on menus in Ontario is an example of legislation filling the void in communication from the industry. He suggested such consequences are best avoided by proactively responding to consumer demands. "The consumer's voice will be heard." 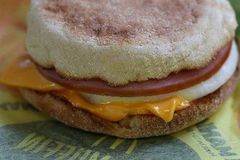 Tim Hortons, Burger King plan app in latest push towards automation
January 20, 2017
Follow Susan Krashinsky Robertson on Twitter @susinsky
Report an error Editorial code of conduct
Due to technical reasons, we have temporarily removed commenting from our articles. We hope to have this fixed soon. Thank you for your patience. If you are looking to give feedback on our new site, please send it along to feedback@globeandmail.com. If you want to write a letter to the editor, please forward to letters@globeandmail.com.
Comments