Her calves have the shape and sturdiness of a pair of finely whittled chopsticks. Her head is larger than her waist – and so is the cocktail glass she holds in her hand. She is the cartoon silhouette on the Skinnygirl brand of flavoured vodkas, wines, and ready-to-drink cocktails.

And that figure is also the symbol of a growing trend in alcohol marketing, which will be even more visible during the all-important summer season for liquor. While beer has long found sales growth in blockbuster brands, such as Coors Light, promising to go easy on the waistline, wine and spirits brands are just catching up.

"It's an industry run by men," said Bethenny Frankel, former Real Housewives of New York star and the professional skinny girl behind the product. She was in Toronto this month launching a new vodka flavour and ready-to-drink mojito. "You need to speak to women in a fun, approachable way. The reason this does so well is, it's flirty, it's fun. The girl's cute and accessible."

Ms. Frankel's brand extends to books, a shapewear line, nutritional bars, supplements and cleanses. While weight management is a crowded field, Ms. Frankel said she did not see much alcohol marketing in this vein beyond beer. She launched her margarita product in 2009, and the brand was acquired by liquor giant Beam Global in 2011, the year it also expanded to Canada.

Since then, what was a relatively sleepy category – premixed, ready-to-drink cocktails in a bottle – has grown. In Canada, the ready-to-serve category, including coolers, mixers and premixed cocktails, is a $672.3-million business. Within that, premixed cocktails are a $98.7-million category. Beam has grabbed part of that by making its first ever foray into weight-conscious products.

"She is right. Spirits specifically … are geared toward men. The majority of our products, the target is men, and that sweet spot between 25 years old and 39 – everyone is gunning for that group," said Nicole Oliva, brand manager for Skinnygirl at Beam Canada.

"… We're talking to a consumer we don't normally talk to."

While light beers have found some popularity among women, their targets are mostly men. Molson Coors Brewing Co. launched a campaign this year for its Molson 67, coining the term "Guyet" to make dieting sound less girly. The idea behind its marketing is that men can feel good about taking up exercise or drinking low-calorie beverages because they are doing it to offset those nachos and juicy burgers they refuse to give up. Molson has recently expanded the campaign, with an ad allowing that women can also go on a "guyet."

But while the calorie-conscious marketing trend has already come to the wine aisles in Canada – with brands such as Skinnygrape, The Doctors' and The Skinny Vine joining Skinnygirl's wine offerings in liquor stores – that same competition has not yet expanded in the ready-to-drink cocktail segment in Canada. Trends in the United States, however, paint a picture of what could soon be coming here.

Since the Skinnygirl line launched in September, 2009, plenty of low-calorie competitors have come on to the scene in the U.S. market. Bacardi Ltd. launched a light version of its Bacardi Classic Cocktails line in May, 2012. The Ivana B Skinny brand has offered cocktails flavours such as Appletini and Cosmopolitan since launched by Florida-based International Spirits LLC in 2011. Another bottle with another silhouette – this one wearing a cowboy hat – hit shelves in the U.S. last summer when the CountryGirl line of low-calorie peach sweet tea, lemonade, and margarita cocktails launched.

That will include Slim Lizzy's, a cocktail line that launched this month in the U.S. Its owner, Illinois-based Social Blends LLC, is currently working with distributors to bring the brand north, with hope by Canada Day, both for sale in stores and on tap at bars and restaurants. The small company has plans to advertise the brand by criticizing its big competitor, Beam: its ads will spoof SkinnyGirl's calorie claims, noting that they are based on relatively small, 1.5-ounce servings.

"What's driving this whole thing, is the success the beer brands had. Coors Light still predominantly, in many markets, it's a female drink," said Rich Simon, chief marketing officer and co-founder at Social Blends.

"We saw the growth extending from the beer category, to hey, it's low-calorie, put a brand behind it and grow that ready-to-drink category. … The market has woken up to the female customer."

The ready-to-drink category was mostly driven by coolers in the past, said Jan Westcott, president of the Association of Canadian Distillers.

Products such as Smirnoff Ice helped to drive its growth, but in more recent years, sales have flattened.

"It's a category that's really more than anything else driven by innovation. For many years it was about flavours ... then they moved to exploring the low-calorie side," he said.

For Skinnygirl, the challenge now is to build the brand beyond just fans of Ms. Frankel. The product line got a boost from her early mentions on the reality show, and she is about to become much more visible in Canada with the launch of her talk show, Bethenny on CTV in the fall.

But Ms. Oliva said that 2013 will be a crucial year for Beam in its attempt to give the brand a wider appeal. To take advantage of patio season, it is rolling out a TV campaign for the brand starting June 10, and this summer will be doing price promotions, and advertising in liquor board publications, outdoor, and in digital.

But asked whether they face any resistance from female customers exhausted by marketing messages pushing ideals of thinness, Ms. Oliva said Beam is careful not to push Skinnygirl as a weight-loss brand. The advertising, she says, focuses on convenience and choice.

For her part, Ms. Frankel says a very small minority object to the brand's overt skinny message.

Growth in sales of Skinnygirl ready-to-drink cocktails in the past three months compared with the same period a year earlier.

Sales of Skinnygirl margarita in 2011, the launch year in Canada.

Sales of Skinnygirl liquor products in Canada in 2012. 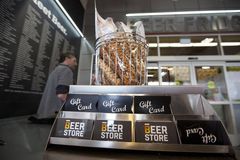 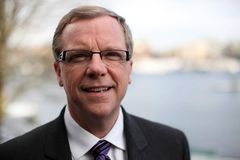