A single shot of Jim Beam is making People for the Ethical Treatment of Animals roll over and play dead.

The animal advocacy organization will stop distributing a New Yorker-style cartoon protesting the annual Canadian seal hunt after the North American distributor of Canadian Club whisky failed to see the humour in the drawing of a seal requesting a drink from a bartender with: "Anything but a Canadian Club." On the back of the postcard is a photograph of a hunter about to club a seal.

Ten thousand copies of the cartoon were distributed on postcards in 20 Toronto bars last week, with more slated to roll out across the country, until Beam Global Spirits & Wine Inc. of Norfolk, Va., insisted PETA put the campaign on the rocks.

"PETA's malicious publication has caused degradation of Canadian Club's corporate image and the advertisement has and will damage the Canadian Club brand and trademark," wrote Kenton Rose, a Beam senior vice-president and general counsel.

In a reply to Beam on Tuesday, PETA spoke with its tongue firmly in cheek. "It was not a happy hour when PETA received your letter," wrote Jeffrey Kerr, the organization's general counsel and senior vice-president of corporate affairs. He insisted PETA's "intentions were entirely top shelf" and that, with the seal hunt about to get under way, "it's hard not to want a stiff drink."

In an interview Tuesday afternoon, Mr. Kerr argued PETA had the doctrine of fair use on its side, under which copyrighted or trademarked material may be repurposed for parody or satire.

"There are several factors to that test: The first is, quite clearly, this is a joke," he said. "It's a cartoon of a seal ordering a drink at a bar. It's obviously a play on the words 'Canadian club,' which unfortunately is the implement that's used to slaughter the seals. It's clearly not talking about the drink."

However, PETA bowed to Beam's request, because "it's never our intention to anger somebody who's not an animal exploiter," Mr. Kerr said. "We pick our battles in everything we do, and first and foremost our mission is to fight animal abusers, and that's where we'll go to the mat."

When contacted last week for their view of the PETA campaign, a spokesperson for Beam Global Canada said the campaign, "has nothing to do with our brand." A spokesperson did not return calls or an e-mail to the company's U.S. headquarters on Tuesday.

PETA paid about $3,000 (U.S.) to print and distribute the initial batch of cards. Those will remain in circulation, but PETA will remove the cartoon from its anti-sealing campaign website.

A PETA spokesman said the organization had heard from a little more than a dozen Canadians seeking copies of the cartoon since it rolled out last week, including a teacher in Victoria who wanted to use it as a teaching aid.

The animal advocates noted that Beam indicated in its letter that the company has, "no position on PETA's position with respect to the Canadian government's policy regarding the treatment of seals." They suggested Beam follow the lead of the distributors of Beefeater Gin, who teamed up with PETA on a previous pro-vegetarian campaign.

PETA looks for seal of approval from bar flies
March 17, 2011 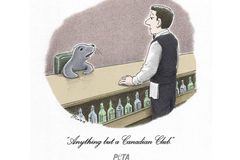 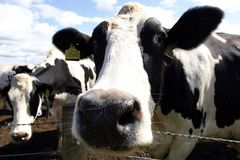 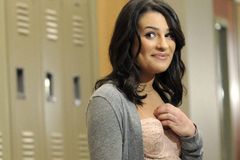 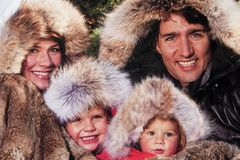