That's the lesson one Canadian agency is bringing home from Cannes this week. For the first time this year, the festival created a stand-alone category for mobile ads. Toronto agency Cundari was among the Gold Lion winners, for a smartphone game it built for the Hospital for Sick Children. The "Pain Squad" game was designed to encourage young cancer patients to fill out more regular pain journals – a constant problem with consistency when dealing with kids already worn out from painful radiation treatments and surgeries.

While the app is not an ad, its awards (two golds, for "best user experience" and "charities, not for profit and public information" in the Mobile category) are partly an indication of the lessons the work holds for other advertisers looking to get the most out of mobile.

The advertising awards circuit in general is bloated with events, but few in the industry dispute the value of the Cannes festival, considered the brass ring for creatives around the globe. And the new category is a signal that a marketing platform is growing in importance, as the introduction of the Cyber Lions did in 1998.

"Cannes Lions grand prix are not always the most commercial things in the world, but it's a sign of where the industry is heading," said Tom Eslinger, worldwide creative director at Saatchi & Saatchi, and the president of the Mobile jury.

Mr. Eslinger singled out one trend in the mobile entries that most caught the judges' attention: utility. The mobile platform presents an incredible opportunity for advertisers to reach their audiences on the devices closest to them. But people have no incentive to download an app or visit a mobile site just to interact with a brand. The advertisers who make their mobile marketing useful and fun will be most successful at using this medium.

"It's telling that some of our main competitors [in the category] … were children's apps," said Cory Eisentraut, associate creative director at Cundari who helped to create the Pain Squad app. That's because "gamification," increasing the appeal of a task by making a game out of it, is naturally tailored to children.

An app that was in a "dead heat" for the grand prix, according to Mr. Eslinger, was Toyota's "backseat driver" game from Japan. Part of a marketing effort to create a future generation of Toyota drivers, the game used GPS location to allow a child in a car's back seat to "drive" along with his or her parents. The animated car on the phone's screen follows a more colourful version of the actual route, transmogrifying the grey concrete of Shibuya, for example, into a road through the clouds heading for a rainbow's arc.

The app, which also includes points kids can use to customize their virtual Toyotas, was downloaded more than 100,000 times.

"People don't love brands … everybody has to do something that's interesting and engaging," Mr. Eslinger said.

In Cundari's case, overcoming physical pain and exhaustion in children is a lesson it will take forward to its commercial work. (Cannes does not award the grand prix to pro-bono work for the non-profit sector, but Mr. Eslinger said otherwise the jury would have considered it a contender for the top prize.) Kids were rewarded for filling in their pain journals with videos from the cast of TV dramas Rookie Blue and Flashpoint cheering them on.

It's had real results: SickKids' data on pain in young patients had been too scattered use. With the app, completion rates for journals rose to more than 90 per cent. Four more Canadian hospitals will start testing the app next month.

"I look at mobile as where the internet used to be 10 years ago. We haven't even scratched the surface," said agency chairman and chief executive officer Aldo Cundari.

Mobile ad spending is constantly growing as advertisers figure out how to use the platform – rising 74 per cent in Canada to $130-million this year, and set to rise another 65 per cent next year, according to media-buying firm ZenithOptimedia's ad spending forecast released this week.

That's still a fraction of the money pouring into display and search engine advertising online, but industry leaders predict it will continue to grow in importance for marketers looking to reach consumers wherever they are.

It installed the machine in Cape Town for BOS Ice Tea. But you don't buy a can of BOS with pocket change; the machine accepts tweets instead. Passersby are encouraged to send a message to their followers. When the machine's Twitter monitor detects a mini-missive that includes the hashtag "#BOSTWEET4T," it dispenses a can.

The campaign is exactly the type of strategy Mr. Eslinger believes marketers need to use for mobile: creating an experience interesting enough to make consumers want to interact. The machine has charmed people – with the incentive of a free drink – to pull out their phones and become unofficial brand ambassadors. Many wrote messages such as "would love some tea," and "my thirst is quenched."

"Bev" is reminiscent of the campaign that took the very top prize in Mobile in Cannes this week. Google created vending machinesallowing people to send a free Coke to strangers in far-off locations around the world.

All users had to do was tap into the Coke app on their smartphones, select a location, and send it along with a message. When the Coke is delivered, the machine shows the sender a video of that person receiving it.

While the campaign is only a test case and has not been rolled out more widely, the jury felt it used mobile in a particularly ingenious way.

The business side of things

Mobile was not the only new category at the Cannes festival this year. This week also saw the inaugural Creative Effectiveness prizes, reflecting a growing pressure in the industry to demonstrate the business case behind marketing budgets.

The Grand Prix in Creative Effectiveness went to BBH London, U.K., for Unilever PLC's men's body spray, Axe. Because it is targeted at young men, the brand has to constantly refresh its campaigns to appeal to new consumers as others grow up. After a successful product launch in 2008, its ads weren't working as well and sales for new fragrances weren't as high. Its "" campaign hit 100 markets and increased sales.

Other Lions winners in this new category:

Greenpeace takes on the oil sands, and other ad news from this week
April 30, 2018 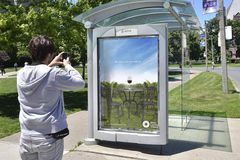 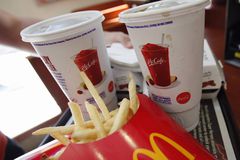 Headphones found, music can restart
May 1, 2018 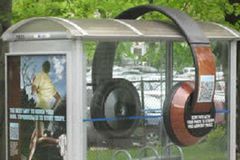 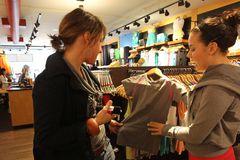