Bank of Nova Scotia is taking a close look at its high-profile sponsorship of a major soccer league in the wake of an unprecedented corruption sweep that has ensnared top executives at FIFA – and its sister organization in the Americas – in allegations of more than $150-million (U.S.) in bribes and kickbacks.

The U.S. Justice Department's allegations are aimed not just at FIFA, soccer's top governing body, but also at the Confederation of North, Central American and Caribbean Association Football, which is known as CONCACAF.

"We are deeply disturbed by these allegations involving CONCACAF officials and take them very seriously. We have zero tolerance for these types of actions from any of our partners," Scotiabank said in a statement, adding that it could not comment on specifics of a legal case.

"We are monitoring the situation very closely and will review our involvement as more details become available."

In 2014, Scotiabank signed on as an official partner with CONCACAF, an arrangement that gave the bank a title sponsorship of the Champions League, as well as an official sponsor of the league's flagship Gold Cup event for national teams in 2015 and 2017.

The partnership also extended to events for other CONCACAF tournaments, Olympic qualifying events and various under-20 and under-17 men's and women's events. At the time, Scotiabank chief marketing officer John Doig called the sponsorship arrangement with CONCACAF a "natural fit for Scotiabank," given the bank's various properties in Latin America and the Caribbean.

"Scotiabank is proud of our deep roots and strong commitment in the CONCACAF regions – supporting customers, businesses and communities for over 180 years," Mr. Doig is quoted as saying in a December, 2014, news release.

The president of CONCACAF, Jeffrey Webb, who also serves on various FIFA committees, was arrested on racketeering and bribery charges in an operation in Switzerland on Wednesday. It is alleged that the awarded rights to the flagship Gold Cup tournament in 2013 were given after an intermediary arranged a bribe on Mr. Webb's behalf. Mr. Webb said in 2014 that Scotiabank's partnership arrangement "exemplifies the growing value of CONCACAF's properties and demonstrates the trust and confidence in our Confederation."

Mr. Webb was swept up in charges unveiled Wednesday as the U.S. Department of Justice issued a 47-count indictment against nine current and former FIFA officials and five sports-marketing executives, alleging a wide range of fraud, bribery and money laundering charges dating back to 1991. The department also revealed the guilty pleas of six defendants.

U.S. restaurant chain McDonald's Corp., a major World Cup sponsor, said it found the allegations "extremely concerning" and said it was in touch with FIFA.

Allegations of bribery and corruption have circled around international football associations for years. In 2012, well before the Scotiabank sponsorship, CONCACAF decided to investigate its own officials after years of dubious audits and financial statements, suspicious employment contracts, and suspect purchases – ranging from a Hummer vehicle to apartments in Miami.

Norm O'Reilly, a professor of sport marketing at Ohio University, called the reaction of sponsors such as Scotiabank "textbook crisis management." Earlier sports scandals, such as Lance Armstrong's doping scandal or Tiger Woods's infidelity, have prompted corporate sponsors to become aware that there's no need to drop their athletes, or their high-profile arrangements, too soon.

The "last thing you want to do is jump," Prof. O'Reilly said, "unless there is clear irrefutable evidence."

But in the case of high-profile events that are adored by legions of fans, even clear proof of wrongdoing – whether perceived as immoral or outright illegal – may not have that much of an impact on fans' perception of the brands, he said.

"Sponsorships of the Olympics, World Cup and mega properties are really successful," he adds. "That's the thing: FIFA's an incredible property for these sponsors. That's why they're associated. It helps with their branding – and their sales. And in certain categories, there are competitors waiting who would swipe up these opportunities." 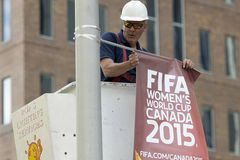