Generally speaking, Canadians are proud to think of our country as diverse, open and inclusive. But when it comes to selling us something, advertisers mostly trust white people to do the job.

That's according to a new study from the University of Toronto, which found an "entrenched" bias when it came to depictions of race in television commercials.

The study, which appears in this month's Canadian Review of Sociology, analyzed commercials that aired in prime time on CBC, Global and CTV. Researchers looked at 244 commercials, all of which focused on food and dining so that the ads were comparable with each other.

It found that 87 per cent of characters in commercials were white, compared with their representation in the Canadian population (80 per cent as per the 2006 census).

Furthermore, where ethnic minorities were included, the researchers found that they were represented much more narrowly, and stereotypically. By contrast, representations of white people allow for all kinds of characters, and frequent depictions of privilege. 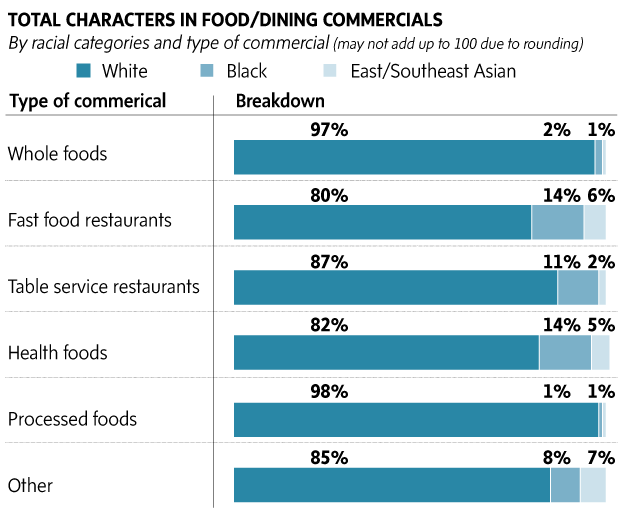 “There were some groups that were dramatically underrepresented relative to their presence in the Canadian population,” said Shyon Baumann, a sociology professor and co-author of the study. “South Asians, for example, are a huge community here, and they’re all but invisible.”
Black and Latino people were actually somewhat overrepresented in commercials relative to their presence in the Canadian population; most likely explained by the fact that many ads for larger multinational brands are actually American-made commercials re-purposed for this market.
The study was part of a larger research project on depictions of race in advertising that encompassed more than 2,000 ads: overall, 79 per cent of the characters in those ads are white, roughly in line with their presence in the population – but when it came to characters with primary roles, that number rose to 83 per cent.
Other groups were underrepresented: East and Southeast Asians, for example, make up nearly 7 per cent of the Canadian population (and a much higher percentage in the Toronto market where the ads aired), but just under 4 per cent of characters in ads. 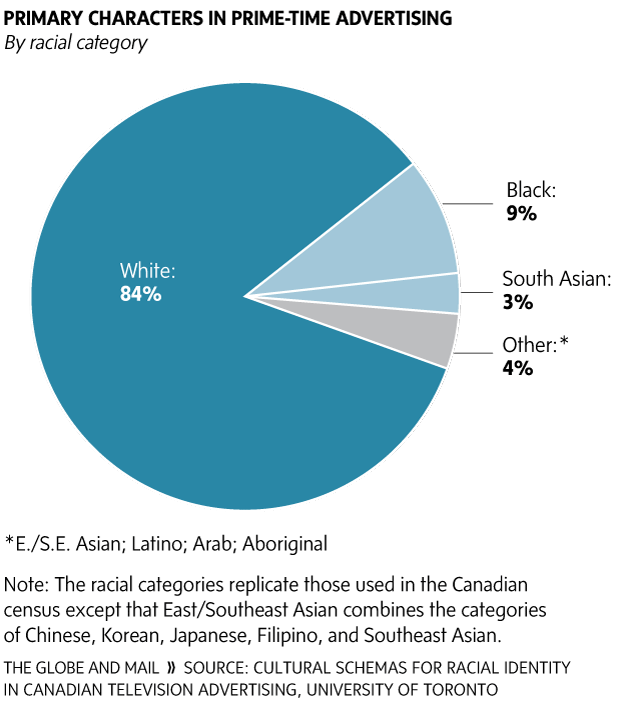 More importantly, though, the study found that depictions of ethnic minorities tended to be far more narrow than the majority. The analysis identified six “cultural schemas,” or associations between race and a wider identity that were common in commercials. White characters were frequently associated with nostalgia, quality, a connection to nature, the nuclear family, and a more highbrow, high-status lifestyle. Black people were more frequently shown in blue collar positions. Asians were often stereotyped as “technocrats,” high achievers with little emotional range.
The point is not that any one of these ads is necessarily racist, the researchers stressed. Marketers have little interest in offending. Rather, the researchers want to show how a pattern has emerged in media depictions – in some cases, reinforcing stereotypes.
“It’s the long-term repetitive nature of the exposure that tends to create impressions that stick with people,” Prof. Baumann said. “Advertising, as media content, influences the way we understand the world around us.”
He suggested that the study could make advertisers and their agencies aware of the pattern, and possibly lead them to consider more diverse ads in future.
“They’re not paying attention to the bigger picture because that’s not their job,” he said. “[Narrow cultural schemas] already exist in the culture, and advertising picks them up because they’re an efficient way to communicate with audiences. And it reinforces them.”
The common stereotypical depictions of race that researchers found in the ads they studied:

Definition: White people associated with a long history both in making and eating quality foods. An overwhelming representation of white people as “the bearers of tradition.”
Examples: an ad for Oka cheese showing artisanal cheese making through the generations, and ads that showed the historical production of bread (for Dempster’s) and jam (for Smuckers)

Definition: White people associated with nature, and natural foods.
Example: An ad for Loblaw with CEO Galen Weston speaking to five (white) farmers from different provinces in their fields. “This schema is noteworthy for the extent to which it diverges from social reality. In farmers’ fields across the country, a great deal of agricultural work in Canada is done by [racial] minorities, both Canadian and temporary foreign workers,” the researchers noted.

Definition: The most common schema that the researchers found, this is the self-explanatory nuclear family at the table. Often the mother is serving food to her family, and the father is often depicted as the breadwinner. “Despite the social reality of a vast reduction in family meals and indeed in nuclear families themselves, the White nuclear family schema suggests that social stability and healthy eating alike are associated with whiteness,” the researchers note.

Definition: The frequency that black people, when shown at all in ads, are depicted in working-class settings such as factories and auto body shops.
Example: An ad for Honey Bunches of Oats cereal, which featured a white food scientist examining flakes under a microscope, then a shot of the cereal factory where two black workers are shown. As with other examples, the point is not that this individual ad is negative, but that it is an example of a tendency overall in advertising to stick to certain roles. In this case, that means black people in working-class roles, reinforcing an overall picture of them as having lower status.

Definition: Asians shown as “unemotional,” even “robotic,” overachievers.
Example: An ad for Baskin Robbins that showed a girl disappointed with a failing grade. It reinforced the stereotype, the researchers say, of Asian students always expecting an A. She tells her grandfather she is disappointed not to receive a reward of ice cream for a good grade; he changes it to an A for her. The researchers point out a lack of emotion between the characters, an abrupt and clipped way of speaking, as evidence for the stereotype.