For Canadians, advertising is not necessarily a negative force. Many consumers in this country understand that ads pay for things they enjoy, such as media content. At the same time, however, a growing number of people are willing to stop buying entirely from companies that get advertising wrong.

Those are some of the findings in a new survey of 1,275 Canadians, commissioned by Advertising Standards Canada. ASC is a self-regulatory group that oversees the ad industry.

The study, released on Tuesday, is an annual look at consumer attitudes toward advertising in this country. Here are some highlights:

While just over two-thirds of people surveyed said they had at least a “somewhat favourable” view of advertising, Canadians will take action when advertisers misbehave. Among survey respondents, 42 per cent said they had recently been exposed to advertising they found “unacceptable.” Forty-six per cent had not, and 12 per cent were unsure.

The most commonly cited reasons that people found ads unacceptable, were that they were misleading or unrealistic (24 per cent said this) or that they were sexist (21 per cent.) Other complaints about ads included those that were sexually explicit, condescending, annoying, or pandering to stereotypes.

The bad news: consumers who see ads like this will change their buying habits. Sixty-five per cent said they have stopped purchasing something because the company’s ad was unacceptable – and that number has been on the rise in recent years. 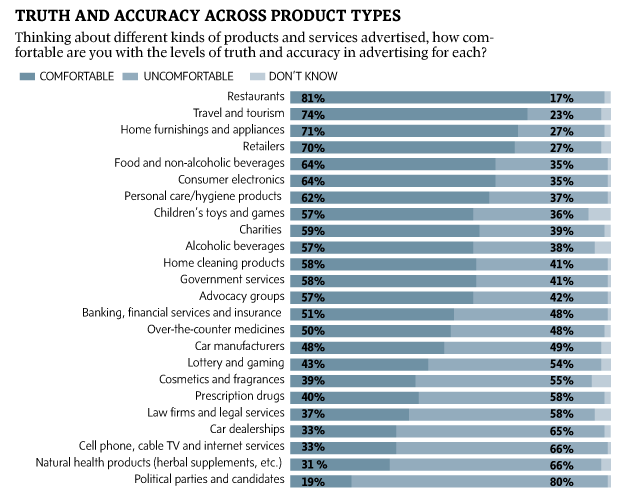 Who is doing it well

The study looked at which types of advertising, by industry, people trust the most. Restaurants, travel and tourism, homewares and retailers all ranked highest in terms of people’s comfort with truth and accuracy in their ads. Politicians, natural health brands, telecommunications companies, car dealers and lawyers all scored low. 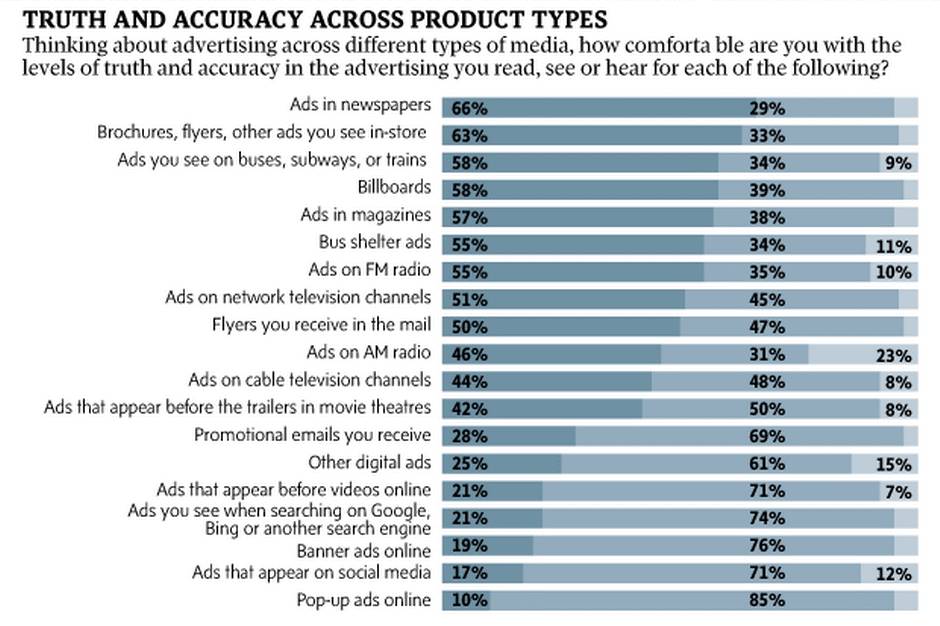 The medium and the message

Consumer trust also varies among media. People are most comfortable with the truth and accuracy of ads they see in more traditional media: newspapers, brochures, flyers, in-store ads, transit ads, billboards and magazines. Expectations of truth and accuracy are much lower for ads online and in social media.

The more cluttered the advertising environment, the more brands are trying to get noticed by making their ads look like content that people want to see.

Some of it is old hat. Most of the people surveyed would not be upset to find out that advertorials, or things called sponsored or branded content, were actually ads. However, many more said that they would be upset to discover Google results, features sections or editorial features were ads. The key to success with what has become known as “native advertising,” then, is to make sure people don’t think it is editorial content in the first place.