Advertisers have been pulling their ads from YouTube in recent weeks, following reports that ads have appeared next to inappropriate and sometimes even extremist content. Now, Google Inc. has acknowledged that it has been able to detect only a fraction of the videos on YouTube that advertisers might want to steer clear of – while also saying that the problem affects only a small minority of its videos.

The world's largest advertising seller has faced mounting pressure recently, as reports in the Times of London, the Guardian, the Wall Street Journal and elsewhere have shown ads running next to – and therefore helping to fund – videos containing racist and extremist content.

Google now says that it has applied new machine-learning systems that, in the past couple of weeks, have identified five times more videos that are not "brand safe."

In the wake of the reports, brands such as AT&T Inc., GlaxoSmithKline PLC, Johnson & Johnson, Beam Suntory Inc., Enterprise Holdings Inc., HSBC Holdings PLC and L'Oréal SA have moved to either suspend or reduce their advertising on YouTube and, in some cases, on other websites not owned by Google but sold through the Web giant's advertising network.

"A good number of our [clients] have put it on hold," said John Montgomery, executive vice-president of global brand safety at GroupM, the world's largest media buying and planning agency. "It's a very small number of ads that slip through but, of course, any amount of ads that monetize inappropriate content, every penny, every dollar, is too much."

Google is also opening up YouTube to some companies that are approved by the Media Rating Council, a New York-based group that accredits measurement firms to track whether ads were effective, whether they were actually seen online and other metrics on behalf of marketers. Google will allow those firms to conduct "third-party brand safety reporting" on YouTube, which will be available soon.

In a statement, Google said "many" advertisers have decided to resume their spending but would not specify which companies it was referring to.

"When we spoke with many of our top brand advertisers, it was clear that the videos they had flagged received less than [0.001 per cent] of the advertisers' total impressions," Google's chief business officer, Philipp Schindler, said in a statement. "Of course, when we find that ads mistakenly ran against content that doesn't comply with our policies, we immediately remove those ads."

The problem goes beyond just Google and YouTube: digital media are generally more murky than traditional media simply because the scale that exists makes it impossible for every ad placement to be vetted by a human with complex capacities for judgment. There are multitudes more spaces for ads to end up in the digital world, and a great deal of automation that exists in slotting ads into those spaces. Often, there is a great deal of emphasis on who is looking at a Web page, as opposed to the content of the page – though marketers have been active in trying to avoid unsavoury content as they follow eyeballs around the Web and on social media.

This has given rise to a market for more measurement to give advertisers assurances that they are not treading into territory that is not "brand safe."

But such tracking is complicated in that many of the biggest Web advertising platforms are "walled gardens" that restrict the kind of visibility into the back ends of their systems that would allow for more thorough auditing.

"You need to know where the ad actually ran," said Chris Williams, vice-president of digital at the Association of Canadian Advertisers. "In traditional media, there's always been this capability of doing an audit. ... This hasn't been, in digital, at the same level as other media. Is this a YouTube problem? No. It's a lack of audit capabilities [in general]."

Advertisers have begun speaking up to demand better measurement capabilities online – not just to ensure that their brands appear beside safe content, but also that they are getting what they pay for.

Marc Pritchard, chief brand officer at the world's biggest ad spender, Procter & Gamble Co., slammed the "crappy media supply chain" and "unreliable measurements" at a meeting of Interactive Advertising Bureau leadership in January. While he did not name giants such as Facebook and Google, he demanded that media companies not be allowed to measure their own performance. "The platforms are marking their own homework," said Ross Barnes, chief technology officer of ad agency The&Partnership. A recent survey from The&Partnership and Adloox, which analyzed billions of digital ad bids last year, found that more than one-fifth of "programmatic," or automated ad spending, was done without third-party verifications.

But even those using verifications are limited in their protections.

The automated nature of online ad buying means that there are gaps in the supply chain: even though "blacklists" exist to allow brands to specify sites where they never want to appear, these can be imperfect: recently, companies including Nordstrom and BMW discovered ads on Breitbart News after they had attempted to block the site.

"It requires total visibility into the platforms," Mr. Montgomery said. Last week, GroupM announced that it was expanding its work with verification firm OpenSlate to scan for appropriate content on YouTube. The firm continues to negotiate with platforms including Google, Facebook, Twitter and Snapchat for more visibility, he said. "We would like very much for those platforms to allow our tags on to their sites to block ads before they appear. At the moment we're not able to do that. … The more visibility we have collectively, the more we can use our brand safety solutions."

Google showcases how shorter is sometimes better in digital advertising
April 14, 2017
In the age of 'fake news,' media outlets turn to advertising to tout the importance of journalism
May 17, 2018 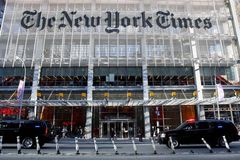