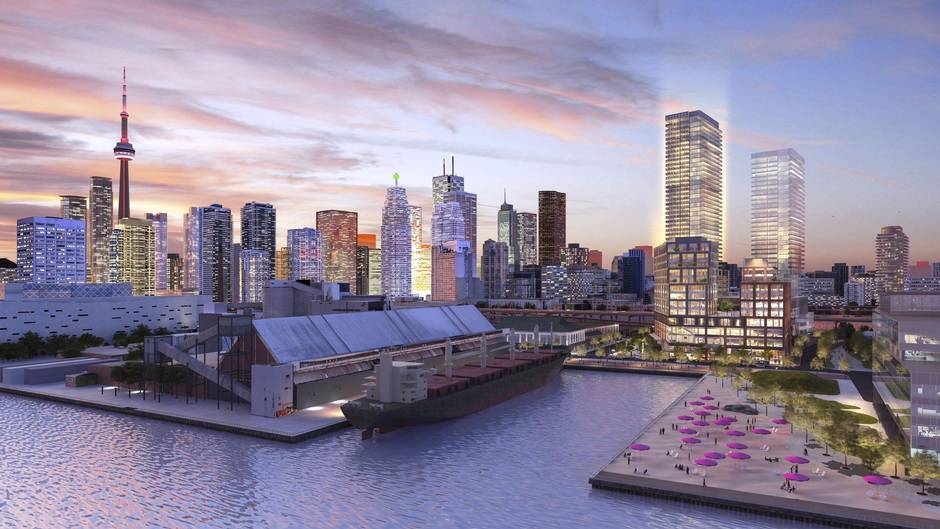 The Daniels Waterfront - City of the Arts will rise on the site of the former Guvernmnent entertainment complex in Toronto. Here, looking from Lake Ontario, is a northwest view of the two-tower project that will include space for office, retail, residential, academic and cultural components. (Daniels Waterfront)

It was a typical afternoon in the 2 1/2-year-old Daniels Spectrum cultural centre in Toronto’s traditionally lower-income Regent Park.

The busy main theatre, with 300-plus seats, was being prepared for another evening event. In the lobby, children were entering for music lessons upstairs. On the second and third floors, the hum of interaction between arts and grassroots organizations was pervasive.

Most commercial developers wouldn’t touch Regent Park a few years ago. The centre is now the focal point of the neighbourhood’s redevelopment, with new condo towers, largely by Daniels Corp. But the new cultural hub of the community has also been driven by Artscape. 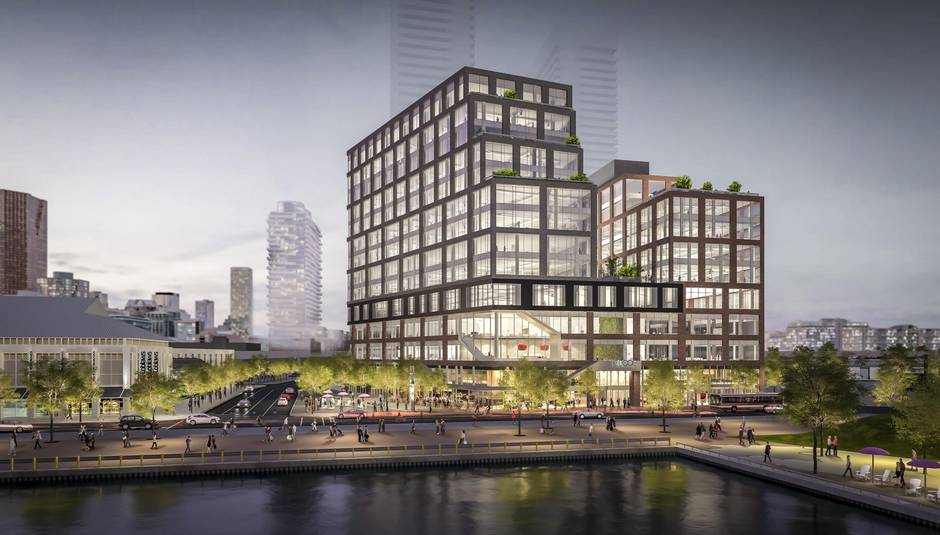 The south commercial office space – at 11 and 14 storeys – will face the lake. Daniels and Artscape both will relocate their headquaters to the new waterfront development. (Daniels Waterfront)

The Toronto-based non-profit developer, which helps create spaces for artists and cultural organizations and incorporates those spaces into larger community planning, is in expansion mode.

Artscape is now readying its new sister organization in Vancouver – BC Artscape – which is looking at seven or eight prospective arts development projects, according to Artscape chief executive Tim Jones. The first president of BC Artscape, Genevieve Bucher, began her job Monday. 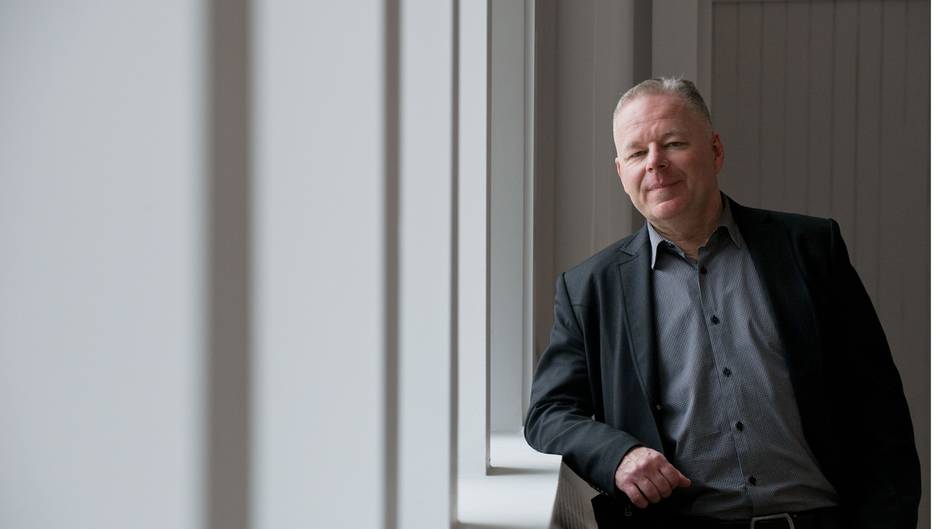 Mr. Jones says the organization is also continually broadening its international ties, exporting lessons learned from its Toronto development by mentoring projects throughout the United States and further afield globally.

“We’re in the process of becoming a much bigger organization,” he said.

The $38-million Daniels Spectrum centre, which Artscape administers, and the organization’s other arts-community projects around Toronto has led Artscape to become a model internationally for using local arts and community groups in development planning. 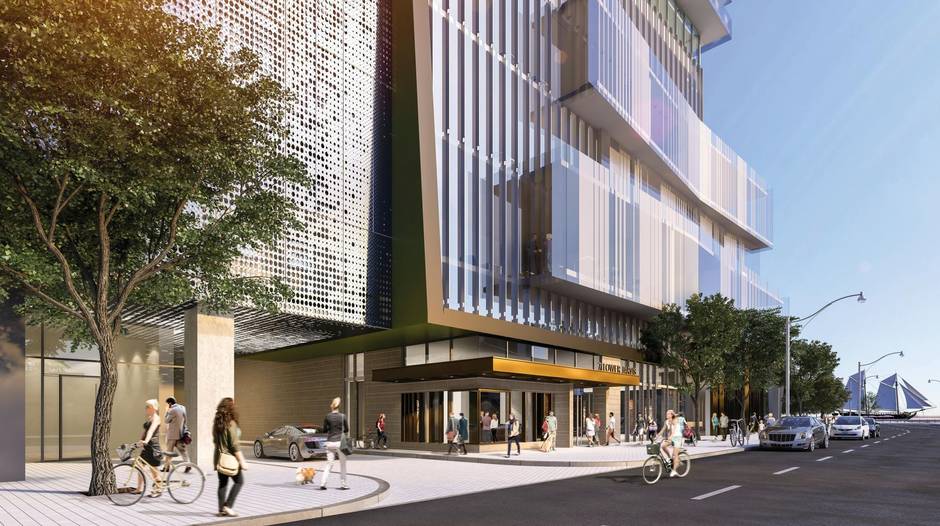 Lighthouse Tower entrance. This 48-storey condominium tower will be grounded by an academic institution in its five-storey podium. The City of the Arts project plans to forge links with OCAD University and George Brown College. (Daniels Waterfront)

The Toronto-based organization began 29 years ago, stemming from a 1970s movement in Britain to provide artists with affordable studios. Various groups still specialize specifically in providing that, but Artscape has evolved further. It operates as a kind of glue between private developers, city agencies and community planners.

Currently, it has nine artists’ spaces in operation in Toronto and another eight in development, and there are 130 artists’ housing units and 125 in development in its portfolio, Mr. Jones said. 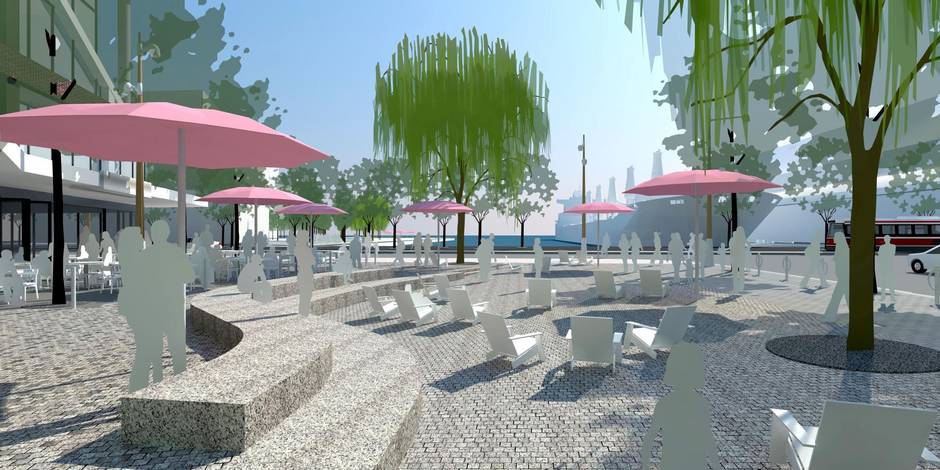 Artscape and Daniels are trying to build on their partnership with the towering, $700-million Daniels Waterfront development on Toronto’s lakeshore announced in March. Occupancy is expected to begin in the fall of 2018, one among the building spree that is starting, plot by plot, by different developers along East Bayfront, an emerging stretch along the eastern edge of the waterfront.

The cultural objective with Daniels Waterfront isn’t now quite as clear as it was in Regent Park. “We have a program in mind, but we’re not in a position to talk about it publicly yet,” Mr. Jones said. 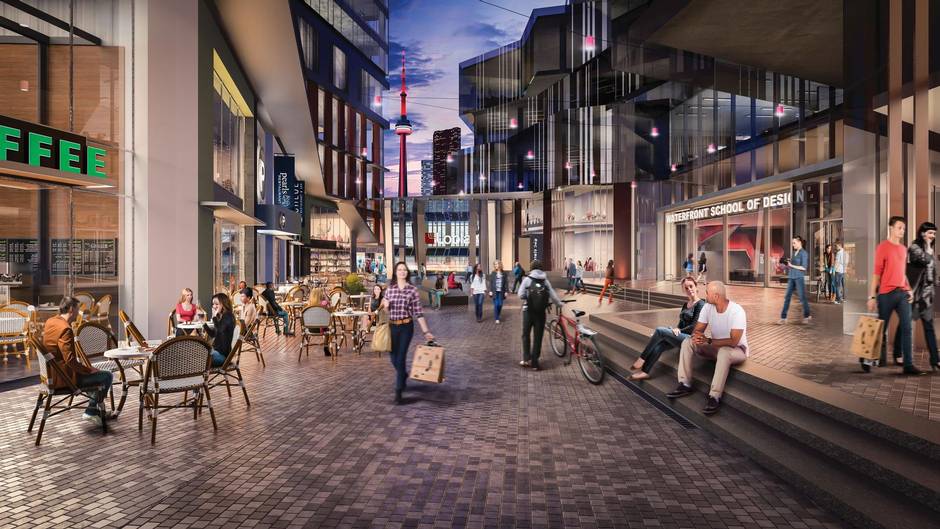 The Yard – an east-west pedestrian promenade offering retail, cafés and restaurants. The entire project is expected to be completed by mid-2019. (Daniels Waterfront)

Daniels Waterfront will include offices owned by the non-profit organizations Manifesto and the Remix Project, which are both involved in urban cultural issues and youth empowerment. Artscape will move its main office there. Artscape currently has around 25 employees in its head office. (There will likely be more by the time the office moves in 2018 – the organization has 108 full-time and part-time employees.)

The benefits Artscape provides to artists, in numbers (all figures are as of May, 2014, the most recent numbers available):

45 per cent: Percentage that rates for non-residential art spaces are below gross average market rates.

2,438: Number of people working or living in Artscape properties.

28: Number of public venues and performance spaces administered by Artscape.

230,000+: Number of people attending events, exhibits and performances in Artscape buildings in 2013.

Artscape also plans to forge links with closer proximity to OCAD University and George Brown College. The idea for the lakeshore by planners at Waterfront Toronto has been to create not only a new pocket of condo towers, but a new high-tech hub for the city.

But when asked more about Daniels Waterfront, the conversation turned back to Regent Park as an example of what’s to come. Unlike the east end of Toronto’s waterfront, Regent Park already had vital, but often struggling, arts and community groups, such as the Regent Park School of Music, that needed space to work, to exhibit, to perform, to band together.

“One of the big aha moments came from a local resident, who’s a member of our steering committee. I’ll never forget the day she said, ‘What if we had a major destination in Regent Park?’ ” Mr. Jones recalled. That anchor point became the Daniels Spectrum centre.

“At the time, people from the outside weren’t exactly flocking into Regent Park to attend an event. It wasn’t on anybody’s radar that that would be something to do,” Mr. Jones said.

“Our work really happens at the intersection of arts and culture, urban development, community and neighbourhood activism, philanthropy, advancing public policy, generally all of those things at the same time in some kind of slightly messy, quirky, but hopefully growing combination,” he said.

The aim is to try to make Artscape’s projects, such as the artists’ work spaces and artist-led shops in the Distillery District, feel of the community. 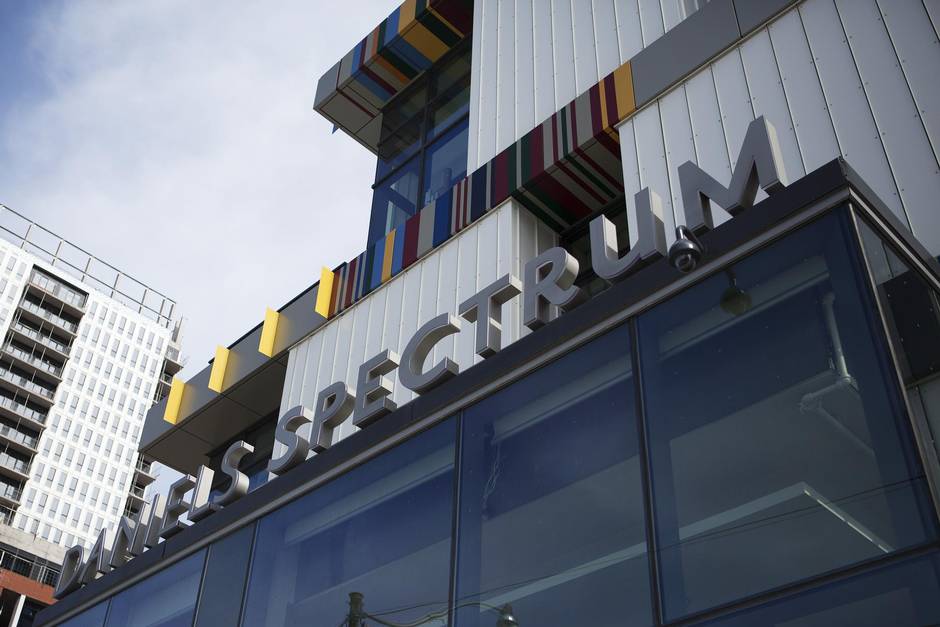 The $38-million Daniels Spectrum cultural centre, which Artscape administers, in Toronto’s traditionally lower-income Regent Park. The 2-1/2-year-old centre, at the base of a condo tower, is the focal point of the neighbourhood’s redevelopment, with new condo towers, largely by Daniels Corp. The centre's main theatre can seat 300 but there are many other gathering places in the centre. (Della Rollins for The Globe and Mail.)

“Tim and Artscape understand the importance of not parachuting in from the top into a community and saying, ‘Here’s what’s going to happen,’ ” said Mitchell Cohen, president of Daniels Corp.

Daniels is also big on using the arts. As developer of the TIFF Bell Lightbox in Toronto, the centrepoint of the Toronto International Film Festival and year-round art-house film programming, along with the soaring Festival Tower above it, Daniels became convinced of the vitality of arts in both commercial and civic terms.

The question, however, is whether the partnership between Daniels and Artscape will become more exclusive, especially with Artscape set to move its offices into the Daniels Waterfront.

Sitting together in a café at Daniels Spectrum, Mr. Cohen glanced over at Mr. Jones. They elaborated on the other’s stories throughout the conversation. “We see a long-term partnership with Artscape, building on what we’ve been doing for the last number of years,” Mr. Cohen said.

Yet, Artscape has many private-development partners. “It’s not just Daniels,” Mr. Jones said. For instance, Artscape’s plans for an arts and cultural space in Weston Village in the northwest corner of the city is with The Rockport Group.

“We’re finding increasingly that there are developers who actually get us, who get the value that arts bring in an urban development context,” Mr. Jones said. “There’s a lot of shared interest.”

And, it seems for Daniels, more competition.