The iconic World’s Biggest Bookstore may have closed in Toronto a couple of years ago, but what qualifies as one of the world’s smallest has just opened.

The 158-square-foot Penguin Shop, the size of a typical bedroom, is located in the lobby of a downtown office building and hints at what is above. Three higher floors have been transformed into Canada’s biggest hive of book publishing.

Three publishing houses with long-established cultures have been brought together under one roof in the new Toronto offices of Penguin Random House Canada Publishing Group. The effort began shortly after the 2013 merger of Penguin Group and Random House, which had previously acquired McClelland & Stewart Ltd. 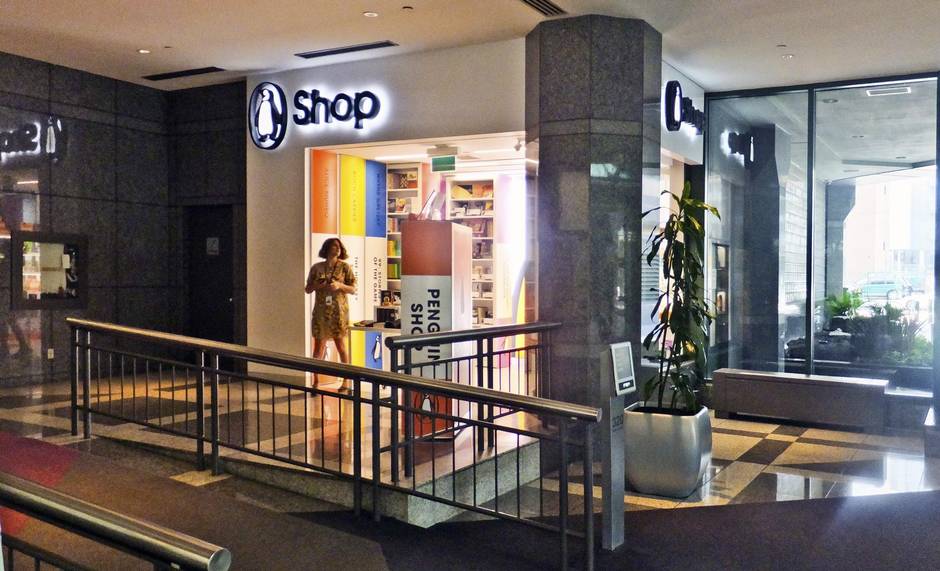 Penguin Random House has tucked a tiny retail store into the lobby of its new office building in Toronto. (Wallace Immen for The Globe and Mail)

After rejecting spaces in large towers in Toronto’s financial core as too corporate, the company’s search team looked at three floors of a mid-rise building at 320 Front St. W. But the original layout of the space that was formerly a bank call centre almost disqualified it, Mr. Pezim recalled. “It seemed very dark and dreary. High-walled cubicles covered much of the window area and tired carpet covered the floors.”

On the plus side, the 1989 building had floor-to-ceiling windows and views of the Rogers Centre, CN Tower and Lake Ontario.

With building owner H&R REIT keen to secure Penguin Random House, it agreed to upgrades of the heating, ventilation and electrical systems to get a 10-year lease. 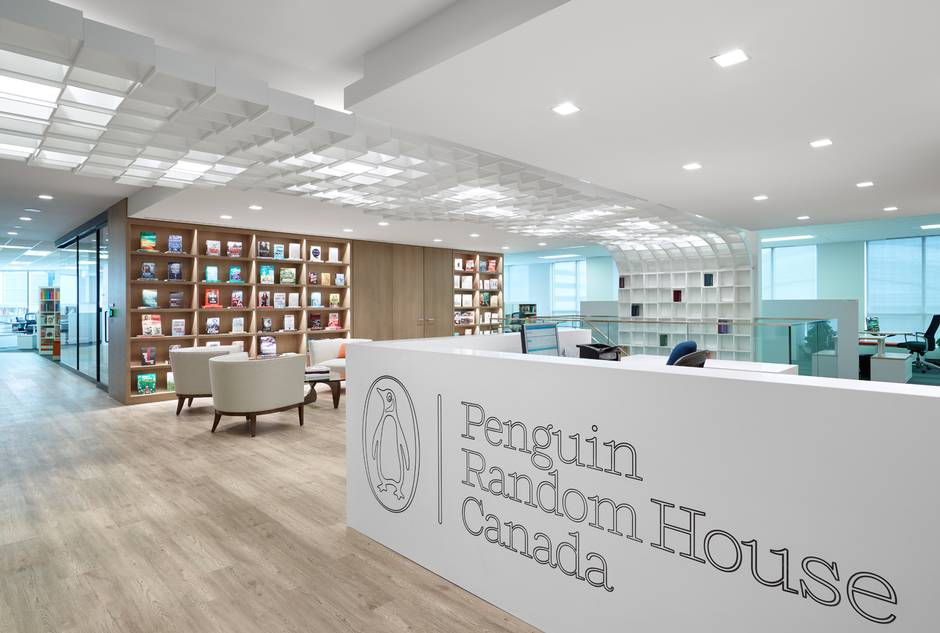 The 19,300-square-foot floor plates lent themselves to having one floor for each publishing house, but the design needed a way to draw the operation together.

A central staircase bridging the floors was the answer, but cutting out the middle of two floors required some further co-ordination with the landlord, Mr. Pezim said. Structural engineers determined that there had originally been a stairway joining two floors that had been filled in. It made for an ideal location for the new staircase.

There were a number of things the clients wanted to achieve in the office design, said Darryl Balaski, principal of Toronto-based interior design firm Figure 3. “A main goal was to highlight the amazing view of the city and the lake and bring in the light. We ripped out the dividers, carpeting and vinyl flooring that made it feel very industrial.”

The design theme was “all things books,” with feature walls that are lined with library-like wooden shelves and reading nooks that display the books being created by the teams in the office. The flooring is an engineered wood that matches the grain of the oak bookshelves that line the corridors. “We wanted to create more a feel of a library or someone’s den,” Mr. Balaski explained. 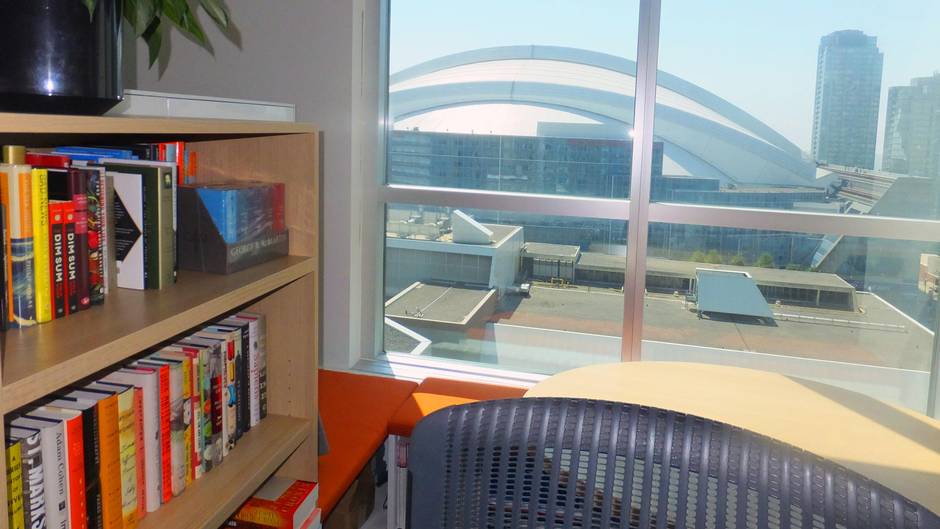 The Penguin offices were a former bank call centre and had high cubicle walls that blocked views of the city, including the nearby Rogers Centre. (Wallace Immen for The Globe and Mail)

To add to the library-like ambience, the renovation included installing a sound-masking system in the ceilings. Designed by Mississauga-based Environmental Acoustics Inc., a system of speakers emits sounds that are often compared to that of softly blowing air, but it’s been specifically engineered to cover up speech as well as noise from general activities.

Another challenge was to connect the three cultures of companies that had been in offices across the city. The designers set up a standards team to work with representatives of the three publishing groups to see how they could connect and unite the cultures with shared facilities.

To give the floors distinctive looks, each has a different colour scheme. Penguin’s floor has a palette that veers toward oranges; Random House’s includes more reds and McClelland & Stewart favours blues.

“We decided to plan informal meeting spaces that would encourage employee circulation, such as booths and tables, and spaces for the staff to display the titles and the authors that they’ve been working with,” Mr. Balaski said. Meeting and boardrooms are unassigned and employees can book them when needed with a touch-pad screen. 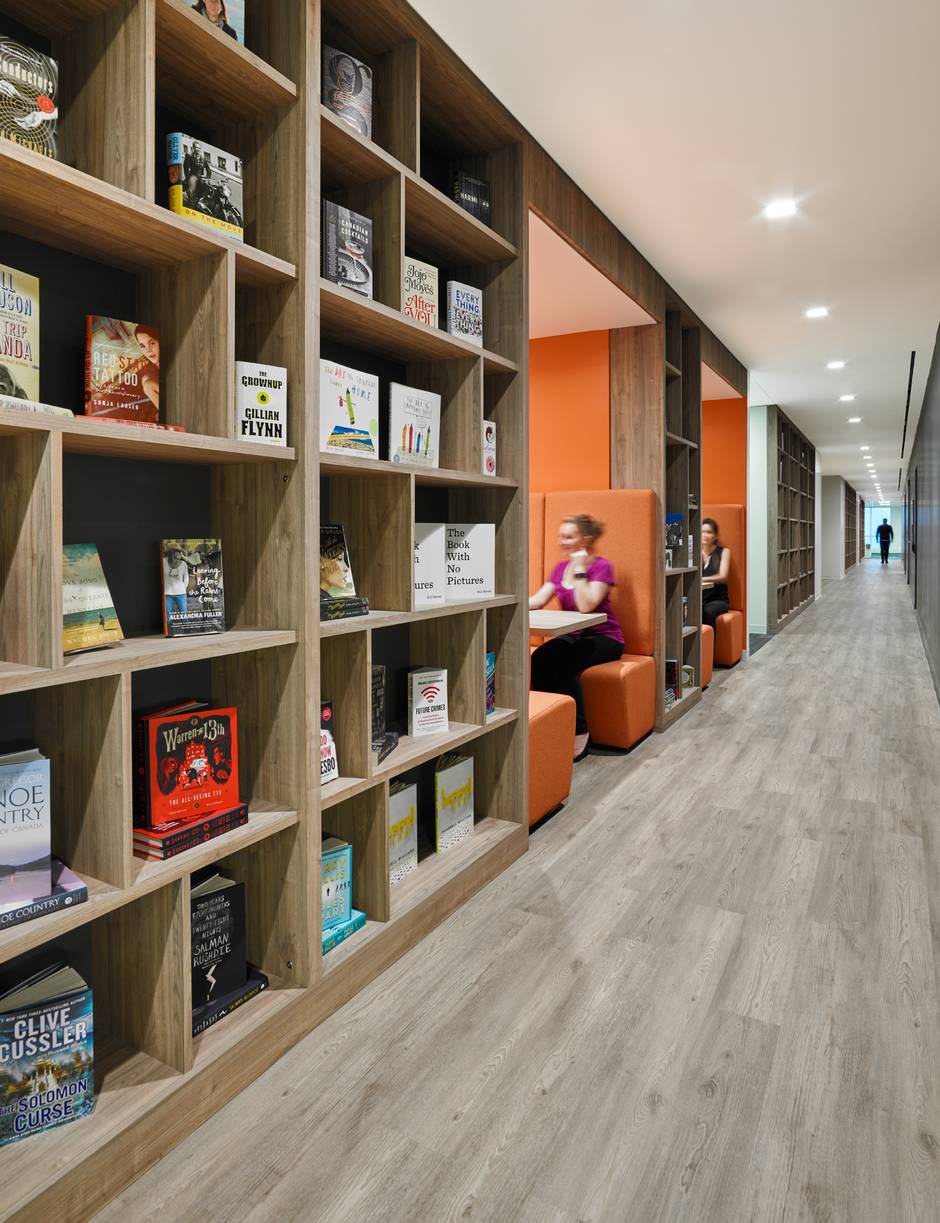 The corridors of Penguin's office has shelving featuring some of the books staff are working on. (Steve Tsai/Penguin Random House)

“A great thing is, the staff has embraced the adaptable meeting areas for in-house events – including book clubs,” said Jessica Cooney, a publicist for Penguin Random House. “Everyone is reading the books on the shelves on each floor. It’s become an alternative to the water cooler to meet in the reading nooks.”

Books arrayed on library-like shelves in the corridors also give staff opportunities to explore books that are being done by colleagues.

Creating areas that are multifunctional, such as a kitchenette and coffee areas with tables for meetings, has brought people together, Ms. Cooney said. There isn’t a cafeteria, but one large meeting area allows people who bring their own lunches to congregate.

The final addition was the bookstore that opened the last week of August in a lobby cubicle that had formerly been a shoe shine shop. Space was tight and Figure 3 came up with the concept of displaying books and merchandise on pull-out racks whose ends resemble the spines of books. The shop features limited and special editions, book-related merchandise, and sought-after branded swag, including Penguin Classics mugs, notebooks, and tote bags.

Penguin Shop will also provide readers with access to the people who create its books. There’s a Penguin Picks program that features favourite titles chosen by authors and from the company’s editors, designers and other staff.

Staff from the Penguin Random House imprints are also being given the opportunity to volunteer to take turns minding the store and get a feel for how readers are reacting to the books they create.

“So if you’re flipping through a book, it may be the designer who laid out the book who’s selling it to you, Ms. Cooney said. The store’s unique location also offers customers the chance to cross paths with their favourite authors, who may be passing by en route to the company’s office, she added.

“It allows the staff and the audience for books to interact more than ever before.”