For sports fans, Buffalo might be best known as the home of the National Football League’s Bills and National Hockey League’s Sabres, which have the unenviable record of a combined zero wins and six losses in championship series. For others, Buffalo might be known as the third poorest city in the United States, trailing only Cleveland and Detroit, and yet one more example of a former industrial behemoth fallen on hard times in the heart of the U.S. rust belt.

But something seems to be stirring in Western New York. The area is undergoing more than $5.5-billion (U.S.) in new economic development, mostly in downtown Buffalo. Projects such as the Buffalo Niagara Medical Campus, the recreational facilities at the Canalside park and SolarCity’s gigafactory, the largest solar panel manufacturing plant in the Western Hemisphere, are generating more than 12,000 new jobs over the next three years.

“It’s a really good problem to have and it’s changed the way we think about our community,” says Thomas Kucharski, president and chief executive officer of Buffalo Niagara Enterprise, a private, non-profit economic development organization. “We went from the whole four Super Bowls and two [Stanley] Cups and woe is us to [now] where people are a lot more optimistic than they have been.” 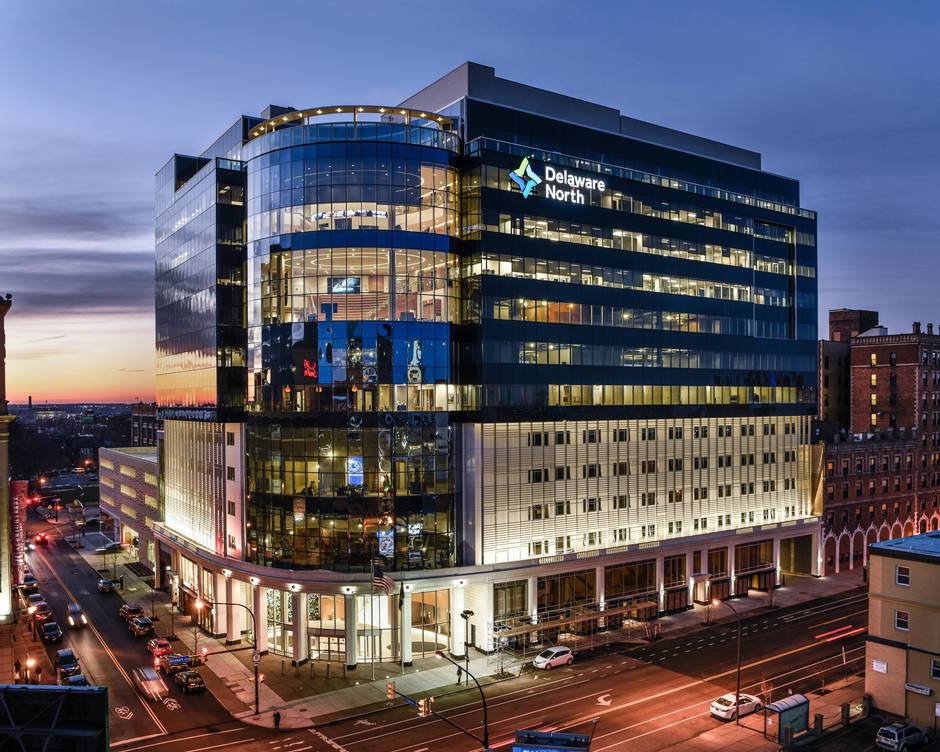 The business community buoys a large part of that optimism, with mixed-use buildings in the city – either proposed, under construction or completed – representing more than $990-million of investment. Among those are Avant, Buffalo’s first mixed-use hotel-office-luxury condominium high rise situated in a former federal building, and the Larkin Center of Commerce, which was previously a soap factory and is now home to almost 100 businesses and service providers.

The seven-storey Conventus Center for Collaborative Medicine, part of the Buffalo Niagara Medical Campus, was completed last year by Ciminelli Real Estate Corp. on a two-acre site. Located on the northern edge of Buffalo’s central business district, Conventus will act as the link between the University at Buffalo school of medicine and biomedical sciences and John R. Oishei Children’s Hospital, when they are completed.

“There’s going to be over 20,000 people working on the campus and it creates an opportunity to do housing projects downtown to create more of a 24/7 downtown environment – a live, work and play environment – and that’s really helped with the revitalization of downtown.” 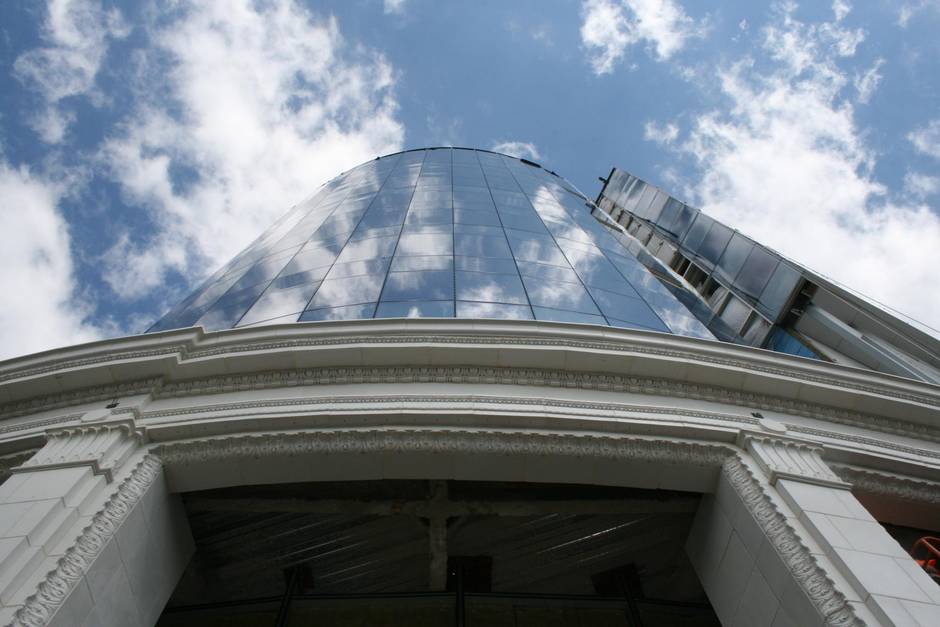 Part of the reason for this growth is Buffalo’s new attitude toward its inventory of historic buildings. The Buffalo Building Reuse Project, which was introduced in 2012 in response to the amount of vacant and underused properties, has helped breathe new life into old buildings. One such example is the Planing Mill, built in 1878 but which sat empty for 10 years at 141 Elm St. before being transformed into 22 loft-style apartments and 4,100 square feet of office space.

Another key tool in the revitalization of downtown Buffalo was last year’s adoption of the Green Code, the first comprehensive update of the city’s building code since 1953. Under the old code, the city encouraged rigid land use programs, such as factories in one area, retail in another and housing in a third. Already in use in cities such as Denver, Cincinnati and Miami, the Green Code allows a more flexible approach, promoting new urbanist ideals such as form-based codes to promote a specific aesthetic for Buffalo’s 24 neighbourhoods.

The change was long overdue. According to Mr. Kucharski, the old code “was so arcane that a lot of projects that wanted to go forward in the manner they’re going now really were [stopped] either by expense, or by time, or by review.”

The new code also helped Fortune 500 company Delaware North build its new global headquarters at the corner of Delaware and Chippewa streets. Previously home to a two-storey terracotta building that was most famous as the home of the Bada Bing sports bar and grill, the corner is now home to a brand-new, $110-million, 12-storey, mixed-use facility that combines a 120-room Westin hotel and retail in addition to its office space. 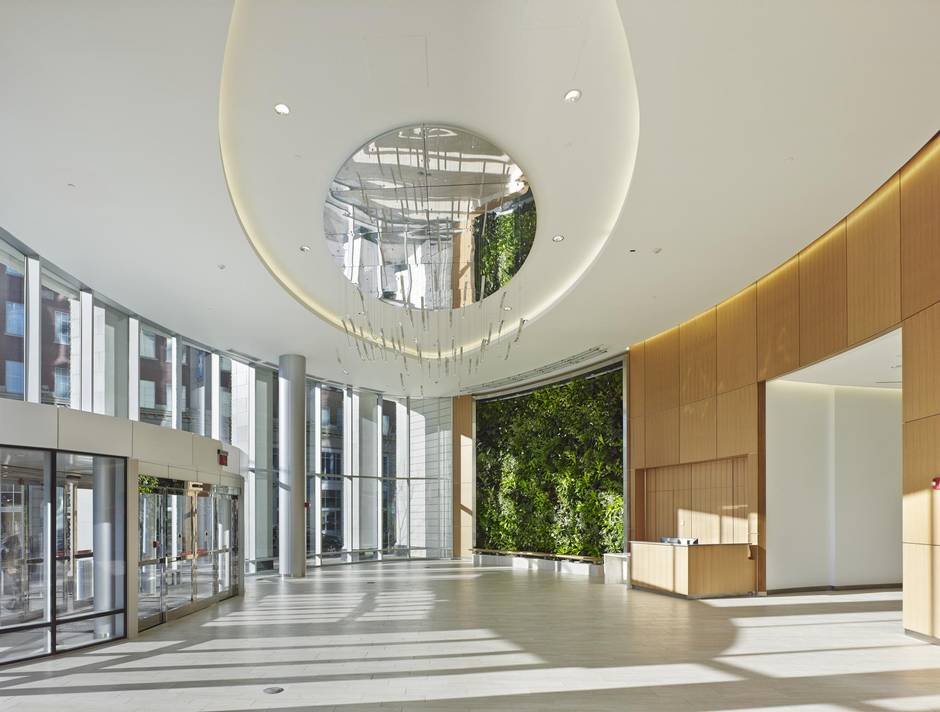 That space will be occupied by Delaware North, a global food service and hospitality company that counts the likes of London’s Wembley Stadium and the NHL’s Boston Bruins, owned by Delaware North chairman Jeremy Jacobs Sr., among its customers. In addition, KeyBank is moving its Western New York offices there, while the rest of the 193,000 square feet of space is being taken by the United States Department of Homeland Security and UBS Financial Services Inc.

The building, which was designed by Toronto-based Diamond Schmitt Architects at the request of Uniland Development Co., has been designed to serve the needs of a new, younger work force, with floor-to-ceiling windows, large atriums and congregating spaces, a rooftop patio and a four-storey biowall in the foyer.

“The millennials are not looking for walls and offices,” says Jeremy Jacobs Jr., the co-CEO of Delaware North and alternate governor for the Bruins. “They’re looking for work spaces where they can sit down with their computer and do their work and do it in an environment where they’ve got sunlight and good views and they’re comfortable and enjoying the interaction with the people around them.”

Despite the modern interior, architect Antra Roze ensured that the exterior will stay faithful to the original building, complete with the same iconic curved entrance facade and new but identical terracotta tiles from nearby Boston Valley Terra Cotta.

“It was really important to us that we honoured the cultural history and traditions of this city so we didn’t want to put up some ultramodern structure,” says Mr. Jacobs. “We wanted to put up a structure that had a presence that showed stability and that also looked like a place that you’d want to go work.”

As a global company, Delaware North could have based its new headquarters anywhere, but for Mr. Jacobs – who, like his brothers and fathers, was born and raised in Buffalo after his grandfather and great uncles founded the company as Jacobs Brothers in 1915 – staying in Buffalo was important.

He credits the Pegula family for buying both the Bills and Sabres and ensuring their long-term future in Buffalo, while he feels there is a movement of young professionals with careers in New York City who are looking at Buffalo as an affordable and safe choice for raising a family.

He also looks at the medical campus as something that will bring new life to the downtown core, sparking a need for more downtown residences, a reason why Mayor Byron Brown has committed to completing 2,000 residential housing units by 2018.

“It’s really been a confluence of events for the city and I think we’re on a roll and I don’t think it’s anywhere near full steam yet,” Mayor Brown says.