China's debt-riddled developers are turning to incentives like luxury cars as they rush to shed an inventory of unsold homes about seven times the size of Manhattan.

Hopson Development Holdings Ltd. in May offered a free Porsche or discounts of as much as 11 per cent to the first 30 buyers of apartments in a complex in southern China. Evergrande Real Estate Group Ltd. is letting homebuyers cancel purchases and get all their money back any time before they move into their flats.

Such offers underscore the urgency among developers as they seize on a nascent rebound in sales and prices to generate cash and reduce record debt. Whether the recovery will gain traction is far from clear: While sales across the country jumped 32 per cent in May from a year earlier, construction and property investment remain subdued.

"By taking this opportunity of a mild improvement in sentiment, developers are trying to sell quickly to get more liquidity," said Kaven Tsang, a Hong Kong-based senior analyst at Moody's Investors Service.

Generous incentives to lure buyers are common in China, however the wobbly state of developers' finances is adding to the urgency to clear inventories of unsold homes that stand at a three-year high of 430 square kilometres (166 square miles).

"Developers cite clearing inventory as their key focus in 2015 because of falling margins and negative operating cash flows," Morgan Stanley analysts led by Hong Kong-based John Lam wrote in a May 19 note.

After falling sales and prices put pressure on developers, China's government started reversing course last year and eased some property curbs, igniting a recovery. Official home-price data due on Thursday will show whether the momentum has been sustained.

No Conviction
Developers bought 31 per cent less land in the first five months of the year and new construction starts slumped 16 per cent, suggesting they aren't convinced about the strength of the recovery. Builders are also holding off raising prices, said Yang Kewei, an analyst at property data and consulting firm China Real Estate Information Corp.

"Some offer small discounts, some cancel earlier discounts, but the top priority for all still is destocking," he said.

Evergrande, which targets more contracted sales for this year than any other listed Chinese developer, in April said buyers across the country can get their money back without giving a reason at any time before they take possession of their homes.

Country Garden Holdings Co. allowed buyers to defer down payments until a month after they sign purchase agreements. To promote the incentive, Country Garden asked all its employees to market the offer on their personal WeChat accounts, a popular messaging service. Three calls to the company's public relations office went unanswered.

Purple Dragon
Within three hours of Hopson inviting subscriptions on May 16 and enticing buyers with Porsches and discounts at its Purple Dragon complex in Guangzhou, the developer sold 300-million yuan of apartments under construction, according to a marketing manager who only gave his surname as Qiu.

Hopson's net debt-to-equity ratio was 75.7 per cent at the end of 2014, the highest in a decade. When counting perpetual securities as debt rather than equity, Evergrande's net debt was almost three times its equity on Dec. 31, according to Bloomberg Intelligence.

"These promotions can be of significant value and could shave 10 per cent or more off the effective cost of a new home even if the price is unchanged," said Bloomberg Intelligence analyst Robert Fong. "In the past, price cuts have caused protests and sales disruptions by earlier buyers."

High Inventory
Bringing down their inventories may take longer now than in 2013, the last time the property market was booming. The 5.2 billion square meters (56 billion square feet) of projects under development at the end of last year was almost five times greater than housing sales of 1.1 billion square meters for 2014, according to the bureau of statistics.

The ratio of inventory to contracted sales, a gauge of how long it takes to digest existing unsold stock, will continue to decrease though will likely remain above the low levels seen in 2013, according to Moody's Tsang. The value of new-home sales jumped 26.6 per cent that year, before falling in 2014.

"Inventory across the country is still high, and pressure for developers still lingers," said Liu Yuan, a research director at Centaline Group in Shanghai. 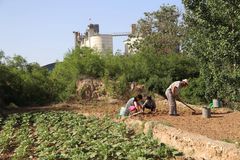