Planning a new Toronto headquarters, Canon Canada Inc. took its time because it had a long checklist of requirements for a dream home.

The company’s philosophy is kyosei, the Japanese word for living and working harmoniously together. So any new headquarters would have to inspire collaboration and innovation. It also had to have a convenient location, a natural setting, lots of open space and environmental sustainability.

That turned out to be a tall order, and the search for a new site took nearly two years before the camera, medical imaging and electronics company bought 18 acres at the northwest corner of Mississauga Road and Steeles Avenue West in suburban Brampton, Ont. The office is to open in May.

“We considered other locations but they were smaller, more restricted and less beautiful,” says Nick Tomotsugu, vice-president of logistics, general and environmental affairs for Canon Canada. 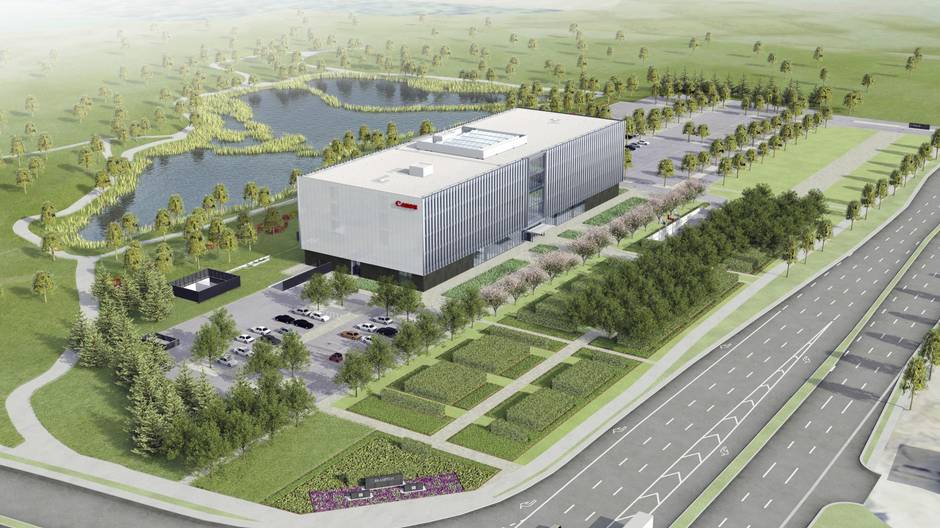 Canon's new Canadian headquarters is located in a Toronto suburb and is close to major highways, but its property has a natural feel. (Moriyama & Teshima Architects)

Commercial land that’s convenient to reach is getting tough to find in the Toronto area, and the Brampton site is convenient to major highways 401 and 407, he added. The former farmland bought from Ornstock Developments Ltd. is in a fast developing commercial and residential corner of Brampton. Nearby developments include new offices for Loblaw Cos. Ltd., Air Canada and Medtronic of Canada.

A feature of the Canon property that might have been considered a drawback is that the company had to cover a share of the cost of creating a city-owned storm water management pond behind the building site. But the pond and a protected stand of trees around it creates a natural setting that struck a chord with Canon’s management, Mr. Tomotsugu says. The rear of the building overlooking the pond is being landscaped with trees and shrubs and a two-tiered terrace. A walking and biking path laid out around the pond will serve as an amenity for employees.

Canon’s minimalist vision for the building was a challenge, says Brian Rudy, principal of Toronto-based Moriyama & Teshima Architects. “You always wonder at first whether less really is more, but the minimalist aesthetic works with what Canon is trying to achieve. The building grew out of Canon’s values of simplicity and symmetry and Japanese architectural values: very clean and orderly. They also wanted openness to nature and lots of natural light in the interior.”

At the same time, the Canadian unit of Japan-based Canon Inc. wanted it to reflect that the building is in Canada, so the architects chose simple but rich materials like black granite cladding on the ground floor and travertine for floors. An unconventional bit of whimsy is a spiral staircase in the atrium connecting the first and second floors. The staircase was fabricated in Quebec. 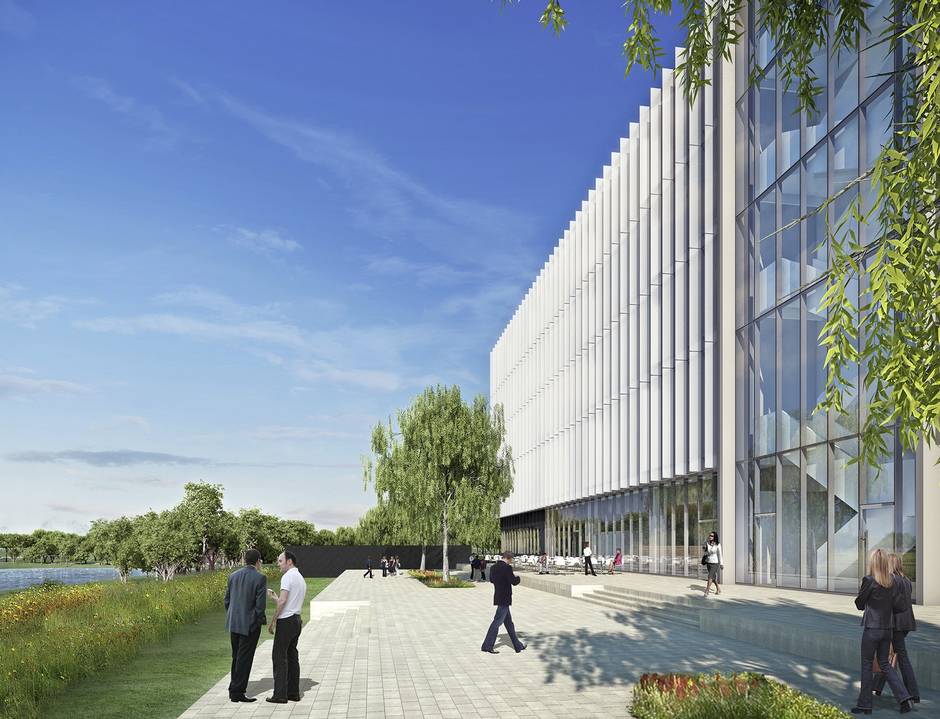 A two-tiered terrace and hundreds of trees at the new Canon headquarters will offer employees a tranquil spot to take a break. (Moriyama & Teshima Architects)

The ceilings are finished with strips of Canadian cedar. It took a while for Canon to warm to the idea of the wood ceilings, Mr. Rudy recalls, “but I think they really love it now. It gives the building a Canadian feeling that they enjoy.”

Another unique feature of the building is glass fins along the edges of the triple-glazed exterior windows. They were a practical solution to the building being set at a 45-degree angle to the sun, rather than directly north-south. The frosted fins help reduce solar heat gain but they also speak to Canon’s reputation with precision glass lenses, Mr. Rudy said. The fins are shaped to produce rainbow effects on sunny days.

Canon wanted an open concept rather than private offices. The layouts arrange work areas around the outer perimeter of floors, that provide natural views. Meeting and collaboration spaces are oriented around the central atrium that has a glass skylight.

To eliminate clutter, each floor has a central filing room to replace file storage at desks. Employees will either scan documents into their computers or store critical hard copies in the central filing storage, Mr. Tomotsugu says. Modular raised floors that allow mechanicals to run underneath will also keep work areas neat and allow altering layouts as needed. 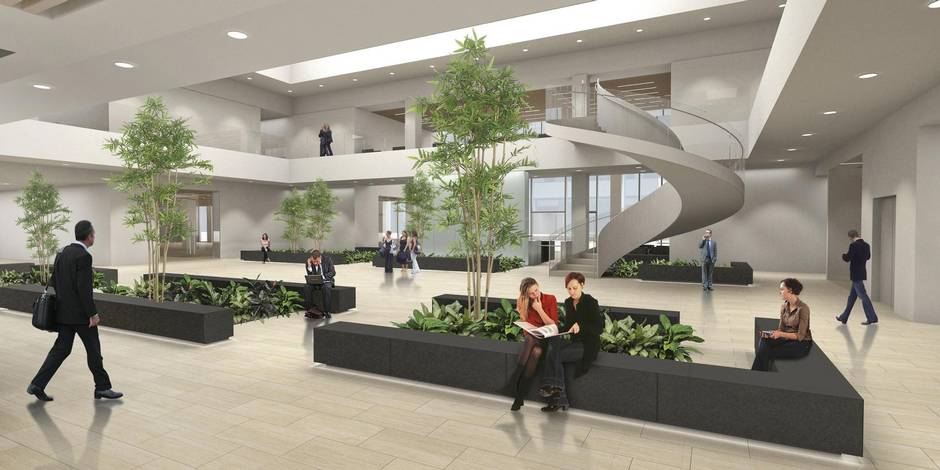 A spiral staircase made in Quebec gives the building's atrium a hint of whimsy. (Moriyama & Teshima Architects)

All the systems within the building, which is aiming for LEED Gold certification, will be monitored by a central automated control. For instance, sensors adjust lighting brightness when the light changes in the afternoon and roller shades designed by Markham, Ont.-based Light Harvesting Shading Solutions Inc. will come down automatically when the sun creates glare.

Eco-friendly features include LED lighting and a system to collect water that falls on the roof into a cistern for use in irrigation of the gardens.

The lobby includes a public showroom. The second floor has repair, diagnostic and training facilities and a full-service cafeteria. Employee amenities include a gymnasium with windows overlooking the pond. There’s also a quiet retreat for meditation, called the reflection room.

The project was designed to easily accommodate 500 employees, which was fortunate because in 2014, after the project was finalized, Canon amalgamated digital printing products company Océ-Canada Inc., as a division under the name Professional Printing Solutions Group. That added an additional 50 employees to the 400 from Canon making the move from three offices in nearby Mississauga. Canon will keep its warehousing operations at an existing facility in Mississauga near Pearson Airport.

In the future, as the company grows, there’s also space for potential additional buildings on the large lot. A parking garage beneath the building is designed to be able to expand to the north, Mr. Rudy notes.

The move-in from the existing offices in Mississauga will be done in stages, with the first group arriving at the end of May, says Rajani Kamath, Canon Canada’s director of corporate communications.

“We’ve held periodic employee meetings to focus on the new facilities and have pictures on our Internet site. There have been a lot of opportunities for employee input and subcommittees in departments to discuss alternatives in facilities and layout,” she notes.

“People are getting excited. There are employees across Canada and updates on the new building are the top question we get from all of them.”

Snapshot of a new headquarters