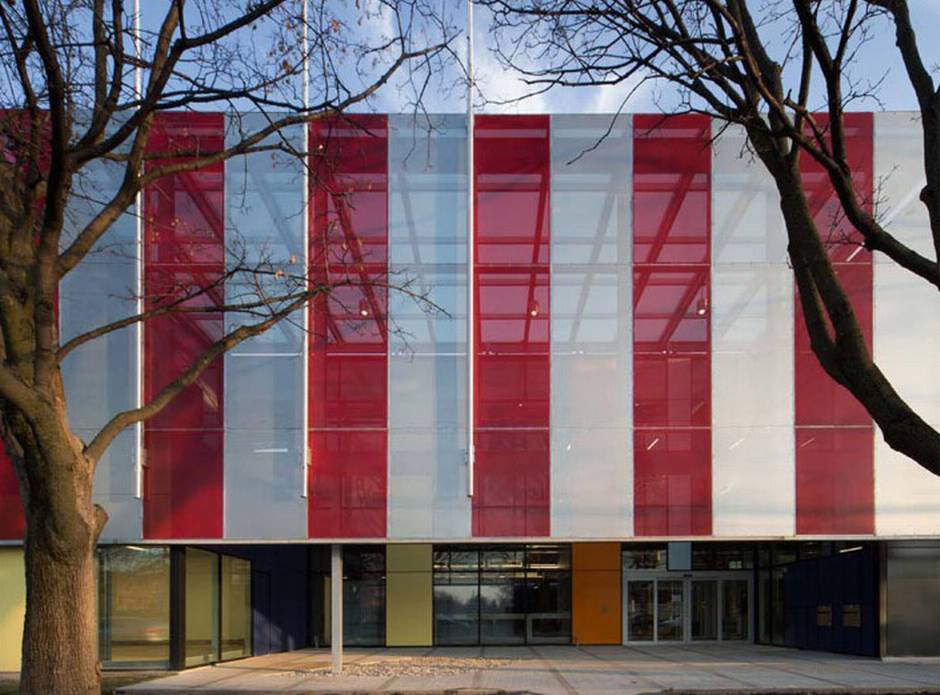 The Notre-Dame-de-Grâce Cultural Centre, which partly opened in February, has red and white metal panels on the exterior, with the red a nod to the brick homes in the area. (Steve Monpetit)

Montreal’s affluent Westmount neighbourhood is a stark contrast to the non-descript Notre-Dame-de-Grâce (NDG) borough that lies directly to the west, with its simple homes and understated strip of retail along Sherbrooke Street West.

That is until you get to the new Notre-Dame-de-Grâce Cultural Centre.

The L-shaped building, which contains the new Benny Library, has bold colour choices and a Lego-like construction, making it a focal point in a neighbourhood primed for revitalization.

According to Russell Copeman, a Montreal city councillor and borough mayor for Côte-des-Neiges-Notre-Dame-de-Grâce, it’s a building that reflects the changing area.

“I initially had some doubts,” he says of the building, which partly opened in February after some delays. “It’s a very different design and I was somewhat skeptical, but as soon as I saw it completed, and the reaction of the people, I was completely won over by the design and the finished product. I’ve been completely converted.” 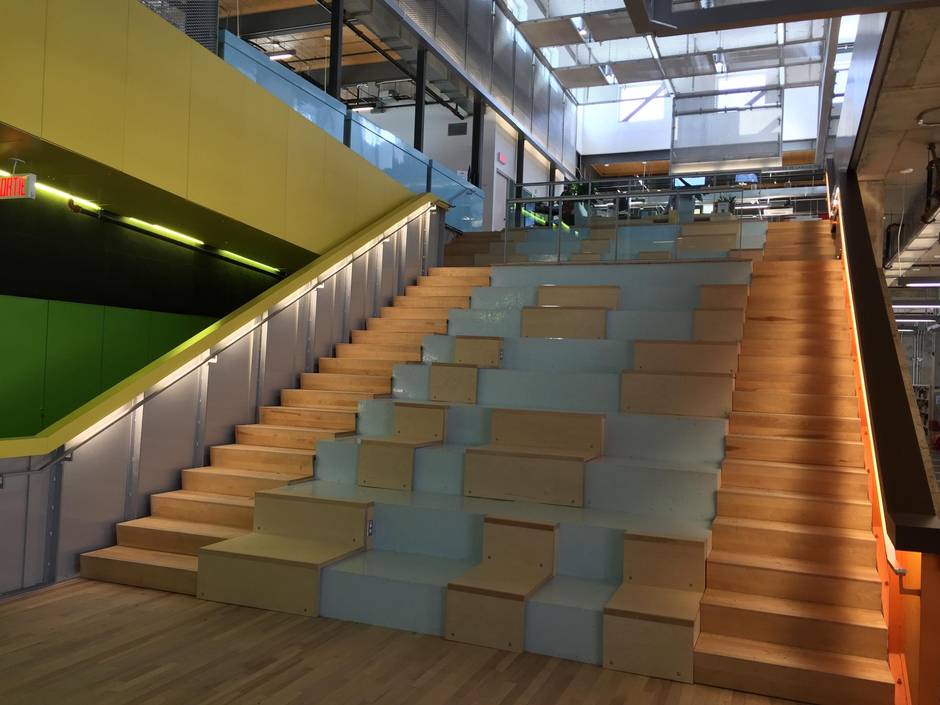 Across the street from the cultural centre is the NDG sports complex, which has two pools and various multiuse rooms. Immediately next door is a Quebec-government-run community service centre, which provides social services and limited health services.

“In terms of municipal facilities, you have a significant concentration of services offered to the public,” explains Mr. Copeman.

The finished building was a long time in coming for both residents and those involved with the project from the onset. The centre’s completion was two years late. Among the setbacks, construction teams found contaminated earth during the building phase and an unexpected Bell Canada transformer, requiring remediation, according to Mr. Copeman.

Mr. Copeman, who also represented NDG as a Liberal member of the National Assembly of Quebec from 1994 until 2008, admits that despite a “rocky beginning” and an “interesting” design, the early reaction of the public demonstrates how successful an idea it was.

About 6,000 people come through the library’s doors in the first month. 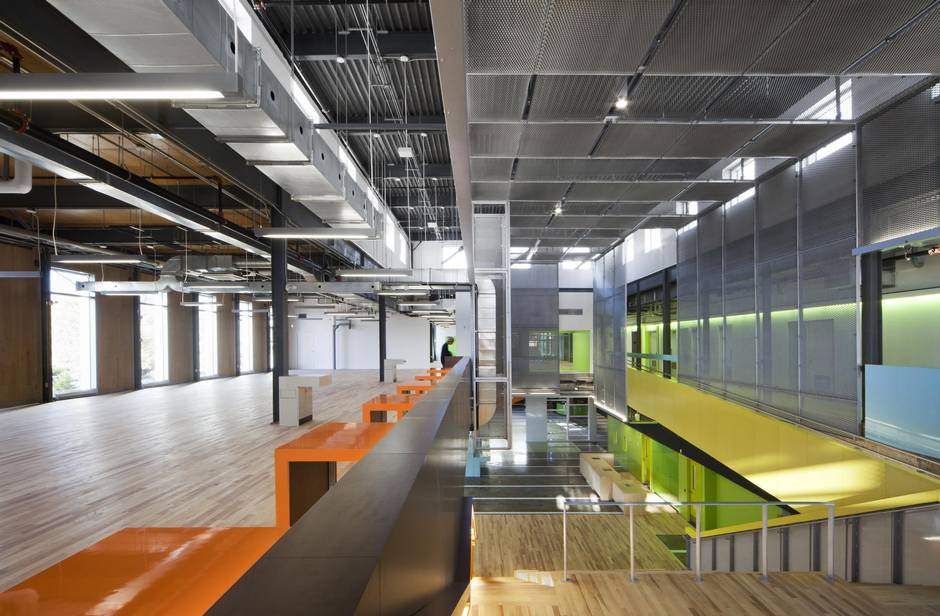 There are approximately 130,000 pieces of literature available at the library but the space also features a robust collection of multimedia, the opportunity to rent an iPad, and a 3-D printer. (Steve Montpetit)

The rest of the cultural centre, including a 200-seat auditorium for dance, drama and musical performances, is expected to be ready in the summer.

The price tag for the new 45,000-square-foot building was $24.6-million, about $14.5-million of which was for construction alone. Financial support came from the Entente sur le développement culturel de Montréal (the Agreement on Cultural Development in Montreal), an initiative between the city and province to boost Montreal’s culture and heritage.

The City of Montreal kick-started the project by launching a two-stage architectural competition in 2010. The objective was to design a contemporary structure that would reflect the realities of a 21st-century library.

“Libraries, in general, need to be rethought about how the space can be used,” says Randy Cohen, one of the key architects for the project from ABC, an award-winning firm that has completed projects throughout Quebec since 1987. 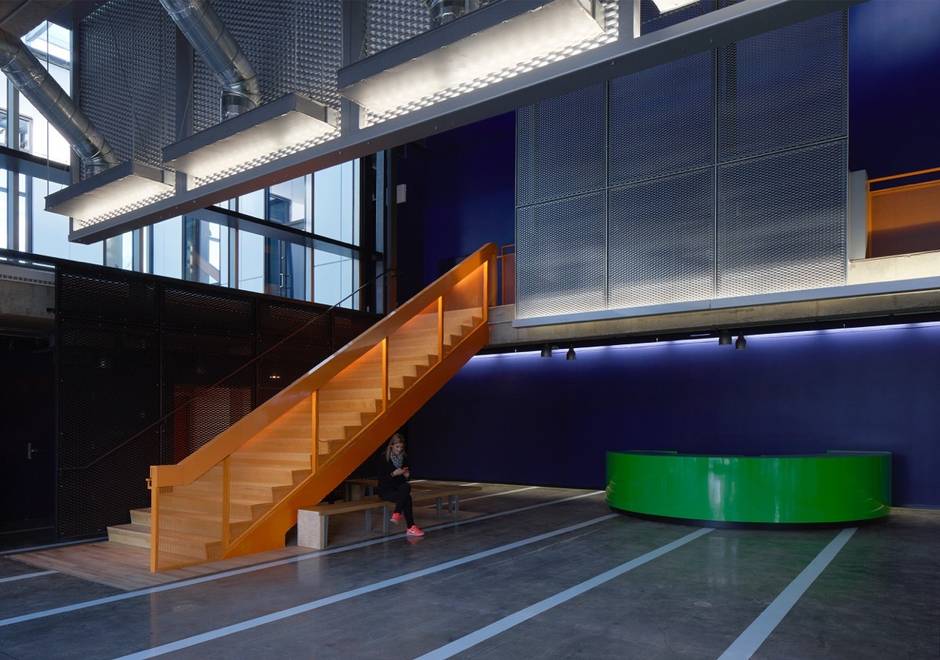 The external facades are made of alternating brick and painted metal panels within steel frames. The use of red was done intentionally to reflect the history of the area’s simple brick homes that were built for veterans during the period after the Second World War.

In Quebec, the government mandates that at least 1 per cent of the budget of any new public-facing building must include an art piece under the Art and Architecture Integration Program. A noted Montreal artist, Hal Ingberg, created the work for the cultural centre, a piece of film inserted between two panes of glass that changes colour depending on the position of the viewer.

The building uses a variety of colours to show off its different sections. Green, for example, marks where the library is, while blue indicates the cultural centre area. White designates functional areas, including the checkout desk for books, while orange and yellow are for the supporting areas, such as work spaces.

“The red is more intense, but it generally reflects the red brick neighbourhood,” says Mr. Cohen.

He explains the final product stayed “pretty much” true to the initial competition drawing, save for some interior spaces that got moved around. He says he is happy with how it turned out.

“It’s full of people, full of life, and only half of it is functioning right now,” he says. “You can just imagine how busy it will be when they actually have shows and whatnot in the theatre space. It’s a happening place, it’s really exciting.”

Residents seem to be equally enthusiastic. Beryl Dewey, 61, told the Montreal Gazette after the library opened that residents of NDG “need more places like this” and says the library helps to keep children “off the streets.” She also says it is “absolutely beautiful.”

In early 2015, the City of Montreal, in a joint agreement with the province, signed off on an injection of $60-million for infrastructure projects in the greater-NDG area, and Mr. Copeman says the library and cultural centre are the start of an exciting new era for residents.

“Even though the building was late, it’s magnificent and has absolutely been well received,” he says. “The number of people entering the building is more than satisfactory, the loans that are going out are very significant, so all in all, it was worth the wait.”