The brand-new storefront space on the city's increasingly popular Main Street had sat empty for more than a year, even though the lease rate was cheap for Vancouver.

When Leon Basin was looking for a place to move his expanding inline skate shop from the edge of Chinatown a few blocks away, he realized quickly he could rent those right-sized premises for almost $35 a square foot, significantly less than the $42 to $45 in another new building a block away.

He hesitated briefly, but decided to go for it.

The new home of his store, Shop Task, is on the ground floor of a social-housing building called First Place. Not just any social-housing building, but one of 14 being built in Vancouver exclusively for people who have been homeless or have some kind of significant problem that makes it difficult for them to get regular housing.

"It was a little bit of a concern," said Mr. Basin, six months after he relocated his business there in April. He said there's a bit more litter around the building than in other places, "but in a way, it's good too. I can open early or late or make noise and we are the last things on the minds of the people managing the building."

Mr. Basin's decision is one that more Vancouver businesses are considering as a wave of new social housing rolls over the city.

Besides the 14 towers it has built or is building, the province has acquired almost two dozen residential hotels in the city's Downtown Eastside. It has partnered with the city to pay for interim housing for the homeless in former chain hotels. And it has numerous social-housing projects that were completed in a previous wave of building. The city has also acquired a couple of hotels recently for interim housing that had businesses on the ground floor.

Creating vibrant commercial areas at the base of new social housing is an issue other cities face as well.

In Toronto's Regent Park, which is slowly being redeveloped from straight social housing to a mix of market condos, market rentals and subsidized rentals, a lot of businesses are mixed in deliberately. Sometimes the city is taking on the risk. In Regent Park and the future Lawrence Heights project, private developers are also asked to put in commercial spaces.

"[Commercial space] plays such an important role in forming a new community that it becomes a planning determinant," said Mark Guslits, an urban-development consultant who was involved in the Regent Park redesign. "Main streets are created. Community hubs. Courtyards. Squares. Parks. All potentially improved by commercial space. Particularly if it's space that is reflective of the real community and its cultural makeup."

For Regent, he said, that meant looking at commercial opportunities that aligned with an East Asian, West African, Muslim and Caribbean community.

In Vancouver, the city zoning in many of the areas where social housing is being built requires commercial space on the ground floors of any building going in, as part of the goal of creating active, mixed-use areas. So that means there's been a lot of square footage available to rent for businesses willing to move in.

Some spots have remained empty for years, like the ground floor of the Lux social-housing project. It sits dead centre in the middle of a gritty block of Hastings Street that has an impromptu flea market operating on the sidewalk almost 24 hours a day.

But others have filled up quickly and with a range of operators. On the ground floor of the Sorella project, which houses 108 women at risk of homelessness, a few blocks from the Lux, there's a sushi restaurant, a hairdresser and a Tim Hortons.

In Vancouver's expensive west side, where the province built a 51-unit project that has housed men who had been sleeping on the streets and beaches nearby, there's a pharmacy and homebuilder's office. On Main Street, next door to Shop Task is a vitamin store.

Those commercial spaces are being closely watched by residents and other businesses, because they can help bring life to a street or create a new problem.

Some groups have been critical that the city, which manages the commercial spaces in the province's towers, and BC Housing don't rent spaces to non-profit groups rather than keep them empty. BC Housing has since reassessed its policy and is now renting to non-profits that provide services to help local residents. The city still has a strict market-value policy.

"People think we should just give these units away, but it's not financially feasible," says John Breckner, associate director in Vancouver's real-estate division. The city's current rules dictate it has to get a return on money invested in these kinds of spaces.

The city also operates under a number of other restrictions. Mr. Breckner's department can't undercut nearby operations in order to get a space rented out. And he has to take into account what the community thinks a lot more than a normal leasing agent would.

"We're influenced by the public much more than a private guy," Mr. Breckner says. A funeral home wanted to lease the commercial space in the Coast Dunbar Apartments on the west side. The residents in the building had no problem with it. But people living in nearby homes raised strenuous objections and the city had to tell the funeral people to move on.

The city and BC Housing also have to take into account the people and non-profit groups who occupy the majority of the building.

Janice Abbott is the director of Atira Women's Resource Society, which owns the Sorella building. Her non-profit also owns or manages numerous other low-income residences in the Downtown Eastside with commercial operations on the ground floor. Among them: the Lamplighter Pub and Jules, a French restaurant, both in Gastown.

It's important to her that the businesses coming in show some willingness to mesh with the existing community.

"I care that they're going to be respectful neighbours. Ideally they could provide a few jobs," Ms. Abbott said. Some don't manage even the first of those. She has dealt with at least one business whose employees make it clear they don't want residents from her project on their premises.

On the other hand, a print shop in the Arco housing project she manages has said it would be interested in hiring some tenants.

"It would be great if efforts were made that there's a requirement in the lease to contribute to the community somehow," Ms. Abbott said.

No one asked Mr. Basin at Shop Task to do that. But he is anyway.

Anyone who lives in the First Place building can get unlimited free skate rentals.

"It's a good cause if they want to exercise more often," he said. Not many have taken advantage of his offer yet. But he's keeping it open. 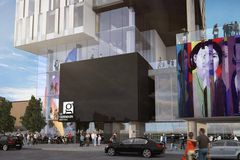 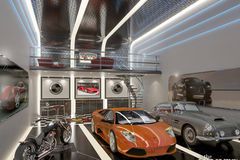 Stake in Cheesegrater pays off for Oxford Properties
October 6, 2014 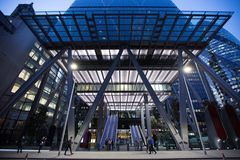 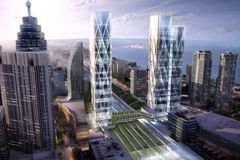 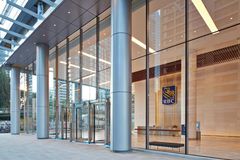 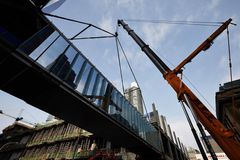