Skip to main content
Kerry Gold
VANCOUVER
Special to The Globe and Mail
Published May 9, 2016

A complex of industrial condo-style units in Vancouver has proven far more successful than imagined – so much so that the first phase is more than half sold out while still in the presale stage.

Construction hasn’t even started on the three-building IntraUrban, located at 8811 Laurel St., a stone’s throw from the busy mass transit hub of Cambie Street and S.W. Marine Drive.

The industrial fringe of the southern part of the city is undergoing revitalization with a slew of residential towers, so it was only a matter of time until the industrial lands got an update, too. With Vancouver real estate prices at an unprecedented high, residential development has been encroaching on several industrial zones, making it an increasingly desirable asset.

Old industrial areas such as Mount Pleasant are transforming from traditional industry to tech. But developer PC Urban has created IntraUrban with light industry in mind. It is a 167,000-square-foot condo-style project for light industrial use, made up of units averaging about 3,300 square feet in size. Small to mid-sized businesses have the rare opportunity of buying into the property, which has windows in the units, and includes some office space. So far, architect and engineering firms, a couple of tech industries, wholesale and construction businesses and bakeries have seized on the opportunity to own their own units within city limits. Investors are showing interest, too, which will mean future rental opportunities.

PC Urban's IntraUrban, shown in an artist rendering, is the first office condo development in Vancouver in five years.

Commercial real estate agency CBRE Canada handled the land purchase and is now selling the units for the developer. Senior vice-president Chris MacCauley says pent-up demand is driving the success of the project, which is selling for about $300 to $350 a square foot. It’s the first industrial condo – also called strata – development in the city in five years, and the vacancy rate for industrial is about 2 per cent, according to Mr. MacCauley.

The first and third IntraUrban buildings are sold out, and the second building was 65-per-cent sold as of last week. “We haven’t even started construction yet,” Mr. MacCauley said. “This is nine to 12 months ahead of schedule on our planned absorption and phasing of the sales.

“Because we’re seeing owner-users [buying in first], and not the investment community, it shows shortage of this product, and a need for small business to have ownership opportunities and new product available to them.”

Breka Bakery & Cafe was one of IntraUrban’s first buyers in Vancouver, and co-owner Dvir Steen says his company based its decision to buy primarily on location, and also on the attractiveness of the property as a long-term investment. He expects to be operating there in one year, when the project is scheduled to be complete.

Mr. Steen says he paid $2.5-million for two units, including a corner unit, that total about 8,000 square feet, which is four times the size of his current production facility on the east side of Vancouver. His IntraUrban space will include storage and office space, and retail. He currently has three retail shops around the city, and he does most of his production at the larger shop on the east side, which he will keep. That store is a short drive to the new IntraUrban site.

As for his IntraUrban purchase, he says: “It’s not cheap, but it’s pretty much market value.” 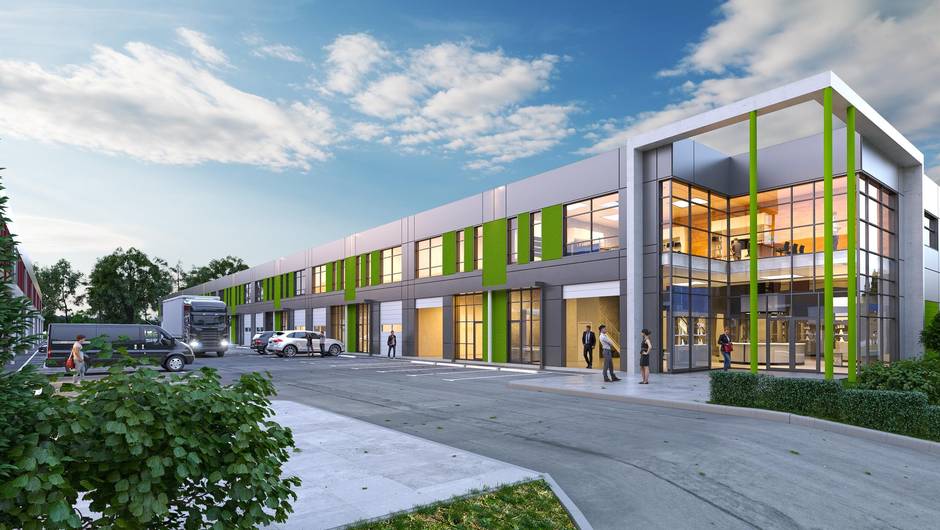 IntraUrban's location at Cambie Street and S.W. Marine Drive in Vancouver makes it a more attractive destination for employees than a remote industrial park.

Mr. Steen was unable to build his family business without expanding his production size. However, he wanted to keep transportation costs to a minimum. Moving outside the city, away from his retail stores, would mean added time and therefore cost, especially if there was a traffic accident on one of the bridges into the city, which happens often. Vancouver’s famously bad traffic is a major consideration for a business. In order to avoid daily congestion, his delivery trucks make their rounds starting at 4:30 a.m.

“The idea was to stay in Vancouver because our locations are here,” says Mr. Steen. “And we wanted to own. The place we are in right now is an old building, and who knows how long it is going to be there. That’s why we were looking for something to own, not to lease. But it’s hard to find something in Vancouver in that size and that location.

“We noticed that there is a lot of rezoning for residential, so it’s shrinking the market. The land in Vancouver is expensive for industrial.”

Now that he can expand, he can also increase his business with more staff and more retail. He’s planning to open a retail store at the IntraUrban site. Mr. Steen says he also believes it’s a sound business investment, which will further his company’s growth, as well.

“We saw it as an investment as well, of course. It looks like the whole area is going to go up [in value], and it will change face, like all the old industrial going down and the new buildings that are coming up. Originally we thought to get three units, but budget wise, we had to take it easy.”

It’s that increased job growth that underscores the need for industry to stay within city limits, says Mr. MacCauley. However, he sees this as a short-term prospect for small to mid-sized businesses, because land values will continue to rise.

“This is the first industrial revitalization [in the area], and it will lead to more. It will be cost effective for people in the near term, but it’s a matter of time before the pricing gets to be too much for those local manufacturers as well.

“Look at people who got pushed out of Yaletown and went to Mount Pleasant, and now they’re pushed out of Mount Pleasant to South Vancouver. It will be the same migration path outward: Then they will go to Burnaby and Richmond, and then farther out to the [Fraser] Valley.

“If you want to own property for your business, there are no opportunities to do that in Vancouver. That’s why they are being pushed out farther.”

Brent Sawchyn, principal at PC Urban, says that in terms of planning, the condo-style industrial project is also a better fit for workers who might not enjoy the remoteness of traditional industrial parks. Mr. Sawchyn remembers working at an industrial park in Richmond years ago and feeling cut off.

“You couldn’t go anywhere for lunch – there was nothing out there. And if there is, you get tired of going to the same place every day,” he says.

“So for us, what we are looking for, is to continue with the IntraUrban model and find scruffier industrial sites close to the epicentre or the core.”

He plans to continue searching for development opportunities for strata industrial within Vancouver.

“We’re counting on doing more. We think the whole idea can travel. But much like single-family housing, it is getting very expensive. Much like residential land, industrial is a scarce commodity. … What that means is a variation on the theme. As we go forward here in Vancouver, industrial is going to start taking more dense forms.”