What could the Remai Modern, Saskatoon’s new multimillion-dollar art gallery and home to the world’s most comprehensive collection of Picasso linocuts, possibly have in common with the folksy Saskatoon Farmers’ Market?

Quite a bit, as it happens. Situated along the banks of the South Saskatchewan River, the Remai Modern is a multipurpose facility whose programming and design have been inspired by many of the qualities that make the nearby Farmers’ Market so successful: an inclusive, friendly and authentic community space that offers the tantalizing prospect of discovery, adventure and entertainment.

The Remai Modern hopes to be all of those things. It will certainly be a signature attraction for the Prairie city, the largest art gallery in the province. With an estimated annual gross domestic product impact of $17-million, it will also make a significant contribution to the local economy. 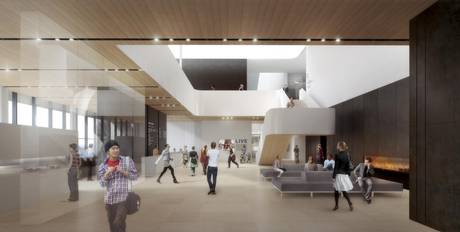 Finishing touches are still being put on the 11,582-square-metre, four-storey building – construction is several months behind schedule because of “delays resulting from drawing corrections and clarifications,” according to a city council report – with the opening slated for sometime in early 2017. “We’re working very closely with the builder, Ellis Don, and the gallery, but we just don’t have a firm date at this time,” says Catherine Gryba, general manager, corporate performance, at the City of Saskatoon.

There will likely be cost overruns, too. Construction is budgeted at just more than $106-million, of which $84.6-million is attributable to the Remai Modern, and the remainder to construction of an underground parkade that will connect the gallery with the adjacent Persephone Theatre. City council expects the project could exceed the budget by $2.5-million to $4.5-million.

The idea for the Remai Modern germinated in 2009, after the city abandoned plans to expand the Mendel Art Gallery. City council instead approved a new purpose-built gallery for River Landing, an ambitious, 30-year project to redevelop a 36-acre parcel in the south downtown area. With private donations and three levels of government pledging funds, council in 2011 approved the design concept put forward by Kuwabara Payne McKenna Blumberg Architects of Toronto (KPMB) in association with Architecture49, the architect of record. 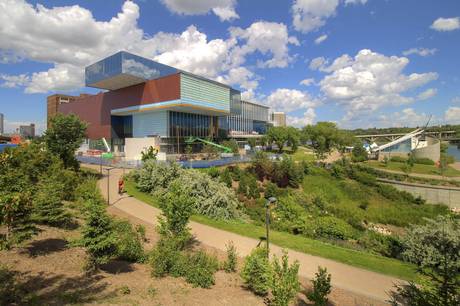 That same year, Saskatoon philanthropist Ellen Remai donated $30-million on behalf of the Frank and Ellen Remai Foundation, with half going toward construction costs and $500,000 annually for 30 years for enhanced exhibition programming. Determined to help forge an international profile for the new gallery, the Foundation in 2012 gifted 405 linocuts by Pablo Picasso, valued at $20-million. Since then, philanthropist Frederick Mulder has donated an additional Picasso linocut as well as 23 ceramic pieces by the famed artist.

The Remai Modern – already touted as Canada’s only museum of modern art – aims to be one of North America’s most important art museums. Besides the Picasso linocuts, the gallery has in its collections 7,700 pieces from the Mendel, which closed last year after five decades. A Mendel salon within the Remai will showcase 13 paintings initially donated by Fred Mendel in the early 1960s, as well as the William Perehudoff murals that Mr. Mendel had commissioned for his offices. The Remai Modern will also “reflect strongly the work of contemporary indigenous artists in the galleries,” says Gregory Burke, executive director and chief executive officer.

The vision for the Remai Modern, says Mr. Burke, is driven by the question: “How can we do something of national and international significance, and still have strong local touchpoints.” 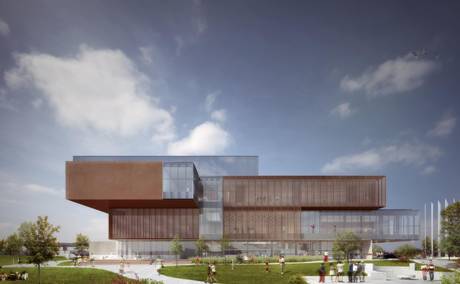 KPMB’s building design is expected to help achieve that close community connection. Visitors will be encouraged to wander freely through the ground floor where glass walls offer a sense of transparency between the interior and the outdoors. There will also be a “great generosity of communal space,” Mr. Burke says, including a huge fireplace in the atrium where people can meet and relax. Community programming will include workshops, exhibitions and performances. The building also offers studio classrooms, a 150-seat lecture theatre, a gift shop, restaurant, outdoor terrace, and impressive event and entertainment spaces such as the second-floor multipurpose room, which offers spectacular views of downtown, the river, the University of Saskatchewan campus and beyond.

The building features four cantilevered horizontal spaces that project out, over and beyond the footprint. “Everybody wanted us to make a curved gesture. They were looking at the Persephone or the [Saskatoon John G. Diefenbaker International] airport, or the river,” architect Bruce Kuwabara explains. “We did not give them the obvious; what we gave them are very clear volumes.”

The architects were inspired by the simplicity and functionality of Saskatchewan’s distinctive grain elevators, affectionately known as Prairie Sentinels. They were also “completely captivated by the Prairie landscape,” as well as the quality of light, says KPMB founding partner Shirley Blumberg. “The flatness and the horizontal planes [of the building] all stem from that. We’re hoping that it resonates with people, that it really belongs in the Prairies and that it is of that culture.” 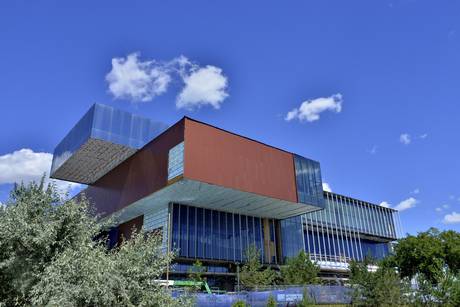 A playful exterior steel mesh feature acts as a solar shading device and provides a dramatic shadowing effect on the building as the sun arcs through the sky. The metal’s rich, plummy copper patina was inspired, Mr. Kuwabara says, by the roofs of the nearby Delta Bessborough hotel, an iconic château-style structure built by the Canadian National Railway in the early 1930s.

“I think the Remai is very interesting example of the direction of art galleries and museums now. In recent decades we’ve seen the growth of super-scale institutions driven by blockbuster shows and a kind of globalization of museum culture,” Ms. Blumberg says. “I think now the pendulum has swung back to small local museums and art galleries which have great relevance to the community that they serve. And I think the Remai is great example of this.”

Remai Modern at a glance

--Designed by KPMB Architects in association with Architecture49.

--Recipient of a 2011 Canadian Architect Award of Excellence.

--Annual visitation expected to be 220,000. Unlike the Mendel, the Remai will charge admission.