With an ad campaign featuring a grumpy monster that would fit in with the ogres from Where the Wild Things Are, Coast Capital Savings strives to set itself apart from other, perhaps more intimidating financial institutions.

The Surrey-based credit union has taken a similarly irreverent approach to the design of its new workplace. Its office space consists of six floors in a recently completed building at the Hub at King George Station, a new mixed-use development taking shape downtown.

Coast Capital wanted the premises to reflect its brand, which president and chief executive officer Don Coulter describes as fun-loving, friendly and accessible. 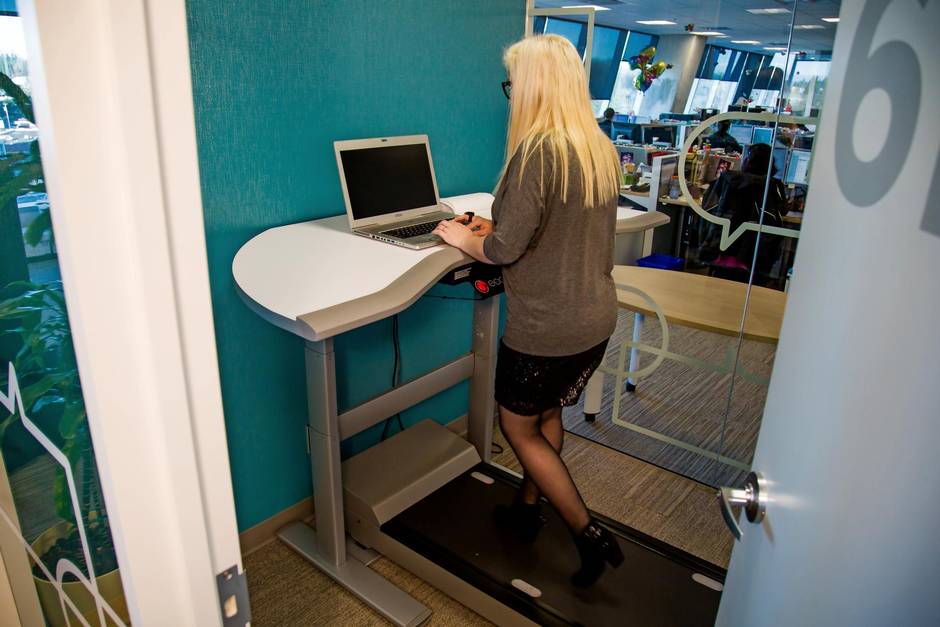 Seeking a relaxed and fun-loving office atmosphere, Coast Capital has introduced such amenities as treadmill desks for employees at its new headquarters in Surrey, B.C. (coastcapitalsavings.com)

“We take our business seriously – managing people’s money is very serious – but ourselves, not so much,” Mr. Coulter says in an interview at the new digs, which Coast Capital calls its Help Headquarters, playing on the credit union’s marketing slogan: “How can we help you?”

“We knew we didn’t want an orthodox head office. In fact, we wanted the opposite. We wanted it to be much more relaxed, which is what our brand is as well.”

Translated to interior design, that lightheartedness means features such as bold colours, an autograph wall for employees and guests to sign, an expansive lookout patio space with barbecues and a fire pit, and themed cafes, some of which flow into meeting spaces via funky garage-style doors. 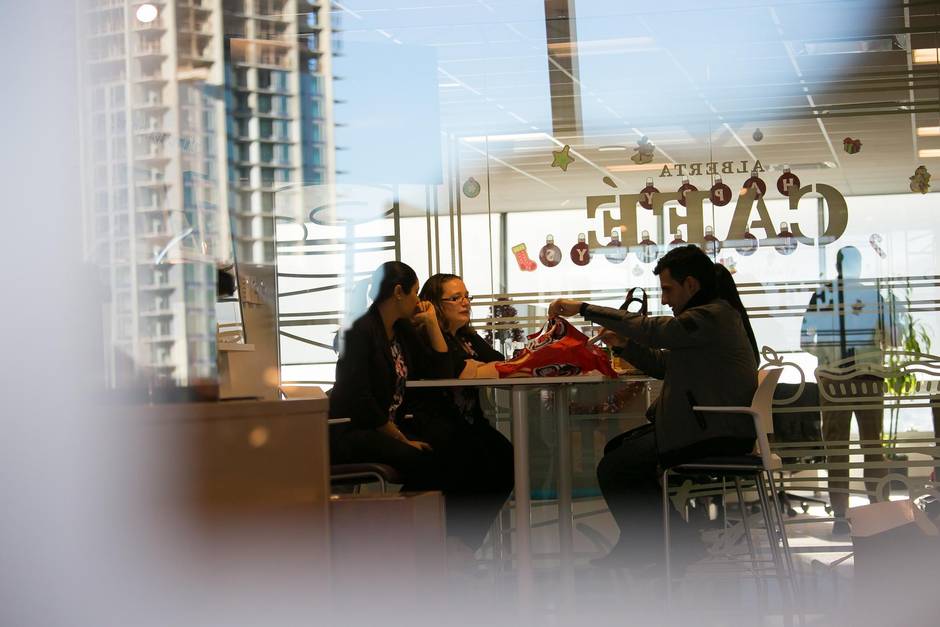 Some of the themed cafes at Coast Capital's HQ flow into meeting spaces via funky garage-style doors. (coastcapitalsavings.com)

Near the halo-shaped reception desk (built in such a way as to evoke openness), enormous numerals that jut out from the walls stand in for nameplates of three “chat rooms” – small meeting places with comfortable, contemporary seats. Mr. Coulter and other senior leaders have used the rooms to conduct employee interviews, among other business, getting away from an old-school office where a prospective employee has to stare up at the big boss behind an imposing desk.

There are no offices, not even for members of the C-suite; rather, the open concept is intended to evoke values of transparency, connection, collaboration and innovation.

Designed by Omicron and Rethink, the same creative agency behind the monster ads, the workplace has more than 60 bookable, small meeting spaces called “enclaves” instead. There are even interior interconnected glass-sided stairways to encourage mobility, interaction, natural communication and impromptu meetings – especially among people from different departments who have likely only e-mailed each other in the past. 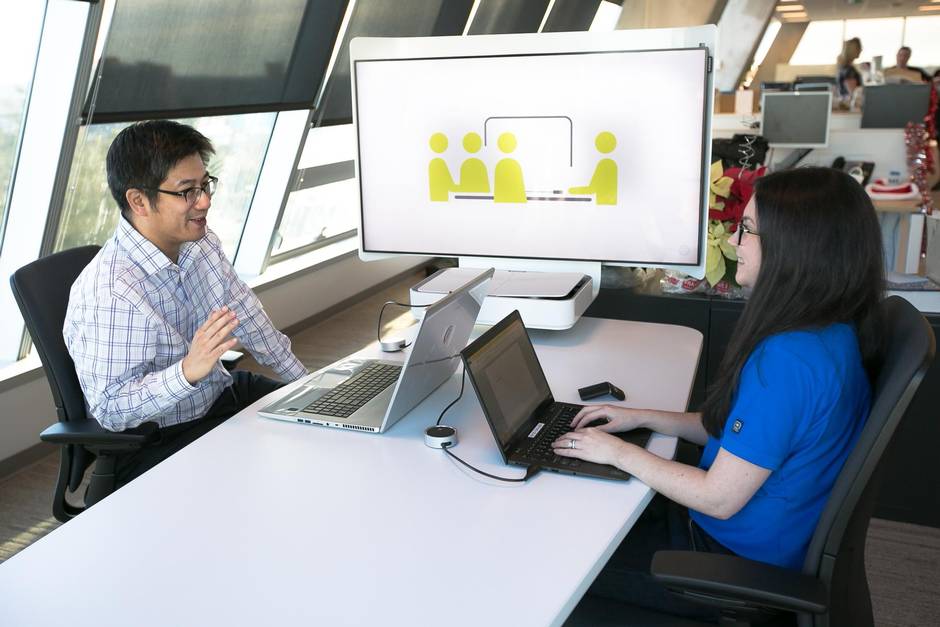 Coast Capital CEO Don Coulter says employees were central to the new office's planning. “So it wasn’t just our vision for our employees,' he says, 'but rather their vision for themselves, too.' (coastcapitalsavings.com)

These kinds of touches do more than make for pleasant surroundings, however. Done right, incorporating a company’s brand into every square inch of its office space can do wonders for employee engagement, experts say.

“A lot of companies want to promote that people aren’t just working for them but that they’re part of something bigger, and they want to reflect that internally as well as externally,” says Leigh Collyer, interior design director of the Vancouver branch of ZAS Architects and Interiors. “You have to refine the design and bring it down to a personal level so it’s not Las Vegas – not just a façade.”

Ms. Collyer notes that employees should be comfortable in order to be productive and creative, pointing out that everything from temperature control and wall colours to technology-enabled work stations (with or without height-adjustable or treadmill desks, as at Coast Capital) must be considered in the planning phases.

“A lot of employers now are really recognizing the idea that the environment really impacts their employees and their overall satisfaction. If you feel like you’ve been on a plane all day with recycled air, that’s going to impact your productivity. And having a strong brand repeated in the space is becoming a critical element in employee attraction and retention.”

Finding new and effective ways of keeping staff members interested in and dedicated to their work has never been more important. A 142-country Gallup survey from 2013 indicates the bulk of employees worldwide – 63 per cent – are “not engaged,” meaning they lack motivation and are less likely to put any extra effort into organizational goals.

Twenty-four per cent are “actively disengaged,” indicating they’re unhappy and unproductive at work and liable to spread negativity to co-workers. That leaves just 13 per cent of employees around the world psychologically committed to their jobs and likely to be making positive contributions to their organizations.

“With the fact that employee engagement is at a record low, partly due to stress, the role of the workplace has really, really changed, and it’s now being used as an asset for attraction and retention purposes,” says Lisa Fulford-Roy, a workplace specialist who’s now at real estate service CBRE Ltd. and formerly of architecture firm Hok. “Employers want employees to have a choice in their work settings to enable them to do their best work.”

Brand awareness has changed dramatically in the past five years, according to Ms. Fulford-Roy. A decade ago, employers thought their logo was their brand and “if they painted the walls in the logo colours they’d be good to go,” she notes.

“But the power of the brand is about the entire experience: a company’s values and its mission and how that is carried out in all decision-making, including space.”

During the five-year planning phase of its new work site, Coast Capital involved its employees from the get-go, surveying them about their job-place needs and desires, right down to seemingly small details. (Microwaves or no microwaves? That question turned out to be remarkably divisive. The company settled on providing them and drafting “etiquettes” to ensure workers aren’t subjected to colleagues’ smelly lunches.)

More than 31 per cent of its staff members are under 30, and the company’s internal research showed that they place a high priority on a workplace that reflects their values of transparency and connectivity.

“Employees were central to our planning process and were the focus of an extensive change-management program,” Mr. Coulter says. “So it wasn’t just our vision for our employees, but rather their vision for themselves, too.”