Before Ontario College of Teachers relocated to a newly acquired building in downtown Toronto, it took stock of all existing furniture, fixtures and case goods to see what could be repurposed.

“What we couldn’t use we either sold or recycled,” says Richard Lewko, director of corporate and council services, who oversaw his organization’s move in 2010.

The transition from leased office space at 121 Bloor St. E. to a purchased building down the street at 101 Bloor St. W. put an emphasis on reusing, recycling and repurposing building materials instead of an outright demolition and sending contents directly to landfill.

“A decommission involves looking at a building and seeing what can be reused, what can be salvaged, what can be donated and, as a last option, what can be tossed,” elaborates Jonathan Waltr, project manager of sustainable building services for construction giant EllisDon in Mississauga.

“It’s a detailed analysis of the quality and suitability of existing stock, which allows an organization to make an informed decision on what could potentially be retained when moving premises.” 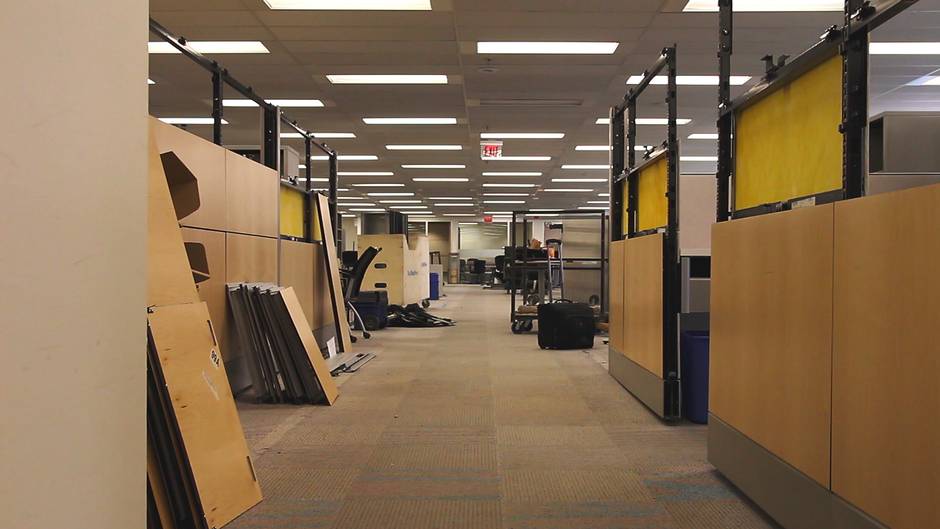 Telus has decommissioned at least 18 offices over the past five years, with 95 per cent of the waste from those projects diverted from landfill. (Telus)

The Ontario College of Teachers decommission project, on which Mr. Waltr served as a consultant while with a former employer, included a detailed evaluation of existing inventory, from white boards to boardroom tables, to determine what could be repurposed in the new space.

The process was slow and methodical, Mr. Lewko allows. But in the end it won the College a leadership in energy and environmental design (LEED) credit for reusing a portion of existing furniture and furnishings from the 121 office spaces. The LEED credit system is a voluntary program recognizing green building practices in Canada and the United States.

The College was just as environmentally conscious in creating its new space. “When we came to 101 Bloor St. our build-out of the new 85,000-square-foot facility resulted in some construction material waste, and we followed the LEED guidelines for the recycling of that material,” Mr. Lewko adds.

Mark Hutchinson, vice-president of green building programs at the Canada Green Building Council, says that waste diversion, or the process of redirecting or recovering materials from the solid waste stream that would otherwise be destined for landfills, has become common industry practice in Canada. 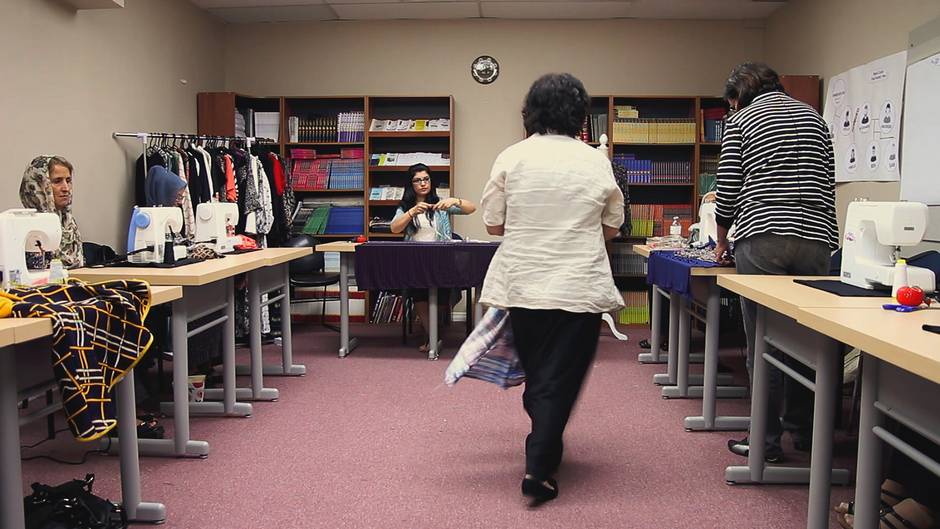 An Afghan women's organization was the recipient of some of Telus's surplus furniture. (Telus)

The most common types of materials to be diverted are wood, metal, concrete, cardboard, gypsum board (drywall), plastics and asphalt. The types and amounts of waste diverted varies based on project type, sorting practices, and regional availability of recycling facilities.

For example, a small renovation may divert a relatively large amount of gypsum board and ceiling tiles, but none of the structural materials one would find on a building demolition and construction project such as concrete, wood or metal. Similarly, projects in more remote communities may not have local recycling facilities for certain materials, and transporting those materials to another city may be cost prohibitive, Mr. Hutchinson says.

An increasingly prevalent scenario is when a company moving from an old facility into spanking new digs, such as a new build, would see recycled furniture (read, patched-up) fitting in with rebranding plans. “The changing dynamics of the workplace plays a part in what gets brought over, or decommissioned or reused,” Mr. Waltr says.

“A lot of new offices are designed to encourage open concept principles, promoting daylight, views and more collaborative environment. This can pose a challenge to the reuse of older furniture and furnishing systems that focused on personal space and privacy,” he continues.

“The concept of a functional office space may have evolved from three walls to a new paradigm, and the decommission will need to reflect that.”

But even outmoded office furniture can get a new lease on life with creative retrofitting. Modular office partitions, for instance, often made of fabric, laminate or glass, can be “reskinned” to make them “appear to the end user as a new workplace environment,” Mr. Lewko says.

If remodelling isn’t an option, then what?

“There are also in-kind donations, mostly to non-profits and charities,” Mr. Langdon continues.

“Carpet tiles are usually not viable on the resale market but they could make a great addition for a new community centre with a limited budget. We can help make that happen with nearly anything that makes up an office building interior.”

Since 2012, Mr. Langdon has participated in 18 decommissions for telecommunications company Telus in major cities across Canada. Their joint projects have an average landfill diversion rate of 95 per cent.

Of the 474 tonnes of office equipment diverted from landfill, 17 per cent was resold to recover market value, 42 per cent was recycled, and 36 per cent was donated to local non-profits, according to Green Standards.

“What we’re seeing is that environmental and social responsibility in the corporate arena is becoming increasingly popular and as businesses pay more attention to these issues, how they decommission their buildings is changing,” says Mr. Langdon.

Green Standards, he adds, has experienced nearly 500 per cent growth since 2011 as a result of increased demand for their decommissioning and recycling services.

A recent client is General Motors. When the automotive giant began renovating its global headquarters and two other major sites in the greater Detroit area, it partnered with the Herman Miller rePurpose Program, managed by Green Standards, to redistribute several thousands of pieces of furniture and equipment.

The multiyear decommission is projected to create $1-million (U.S.) worth of in-kind donation for 100 local non-profits and divert more than 1,800 tonnes of product from the landfill, Green Standards reports.

Decommissions cost more than a full demolition, mainly because they are more time consuming. Many hours are absorbed in counting inventory and the shipping of repurposed goods from one location to another.

But there are offsets to the higher price associated with decommissions; high-priced items can be resold, metal can be recycled for a return, and landfill tipping fees can be avoided altogether.

“Combined with the total value of creating community benefit and avoiding several unique risks, the cost difference can be well worth it, if there is one at all,” Mr. Langdon says.

To offset the higher price associated with decommissions, some companies look to sell their used goods on the secondary market. They will also repurpose furniture as a cost saving measure, which is what Ontario College of Teachers did when moving house.

Instead of buying new, for instance, it repurposed much of the task and boardroom seating, filing systems and stacking panel workstations that had served the College in the space it had formerly occupied for 16 years. Goods not repurposed were sold to incoming tenants at 101 Bloor, or donated to local schools.

“I can’t give a dollar amount,” Mr. Lewko says. “But when you are significantly reducing the capital cost of purchasing new office furniture the savings can be dramatic.”

It’s one of the reasons decommissioning is rising in popularity, Mr. Waltr says. “Once the potential economic benefits are added to the environmental, the argument for decommissioning as opposed to demolition becomes harder to resist.”