The young people milling inside Quantum Coffee look beautiful. And in the adjacent common room behind the coffee shop, patrons sit leaning into their laptops or conducting meetings with friends on a breezy summer afternoon. The space is airy and full of natural light, all wood flooring and exposed brick, the same office aesthetic as tech startups and design studios.

The coffee shop and open space are part of the new, minimalist renovation of what had been the dilapidated but historically important Global Village Backpackers hostel at Toronto’s prominent corner of King Street West and Spadina Avenue.

Gone is the tie-die clash of colours from its days as a hostel from 1997 until the building was shuttered in 2014 and bought by Allied Properties, a Toronto-based developer which owns a number of brick-and-beam office buildings along King West. 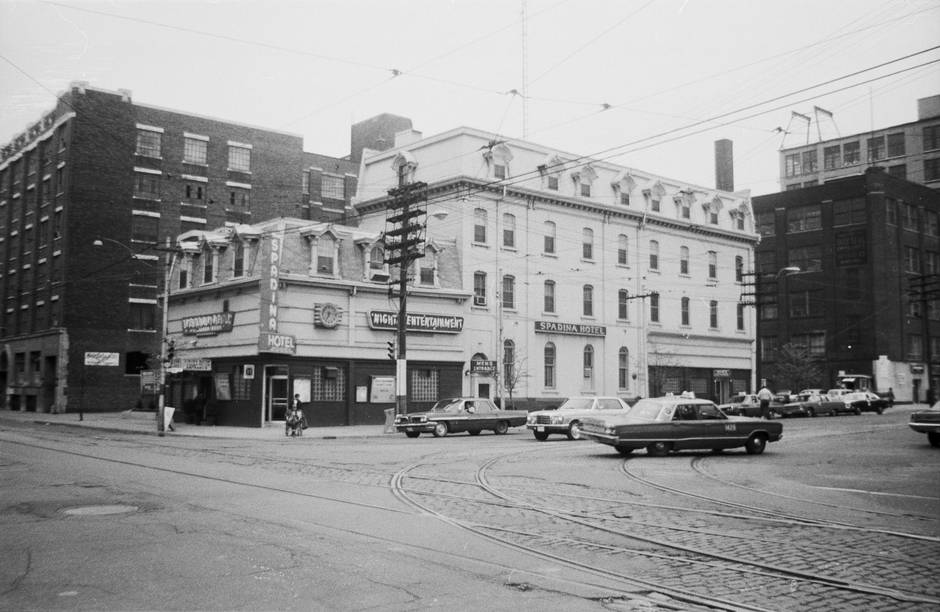 The building at 460 King St. W. in Toronto was the Spadina Hotel for about 80 years. (City of Toronto archives) 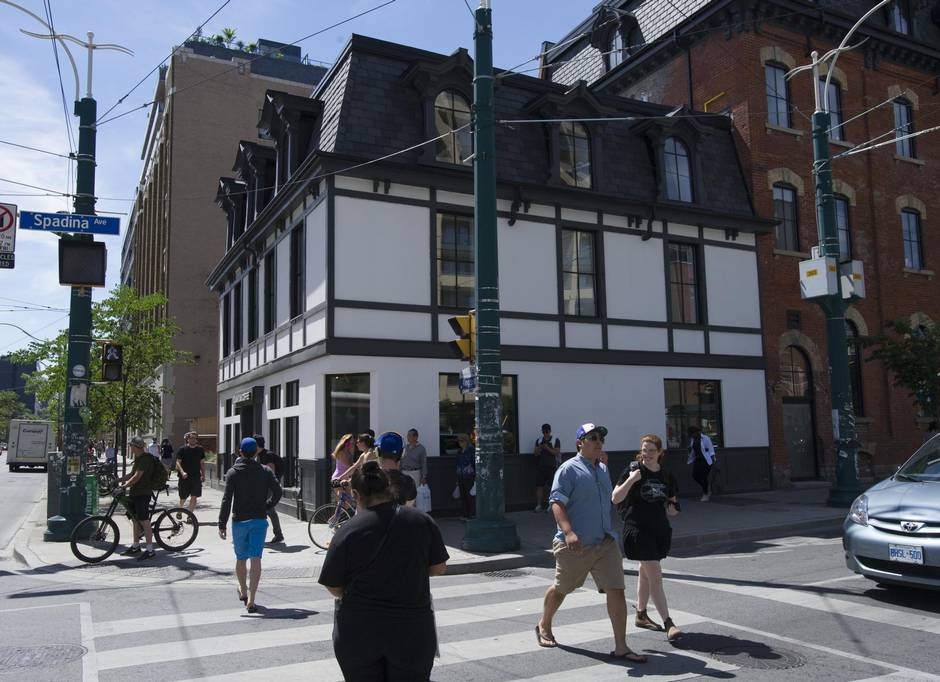 Allied Properties bought the building a couple of years ago and gutted it in a major renovation. (Kevin Van Paassen for The Globe and Mail)

Also long gone is the stately stuffiness of its 80 years as the Spadina Hotel (or Hotel Spadina for a time) and, before that, its various incarnations as Zeigler’s Hotel, Hotel Falconer and Richardson House dating back to the 1870s, forever anchoring this corner as the city centre was gradually pulled westward.

The building, now stripped to the bone, houses BrainStation, a company teaching classes in Web development and other digital business skills. The upstairs interior has more exposed wood and brick, the floors sectioned off into classrooms and laptop-ready work spaces.

Yet the simplicity of the interior at 460 King West belies a debate about repurposed old buildings and a clash between the old and new, particularly in trendier downtown business neighbourhoods. 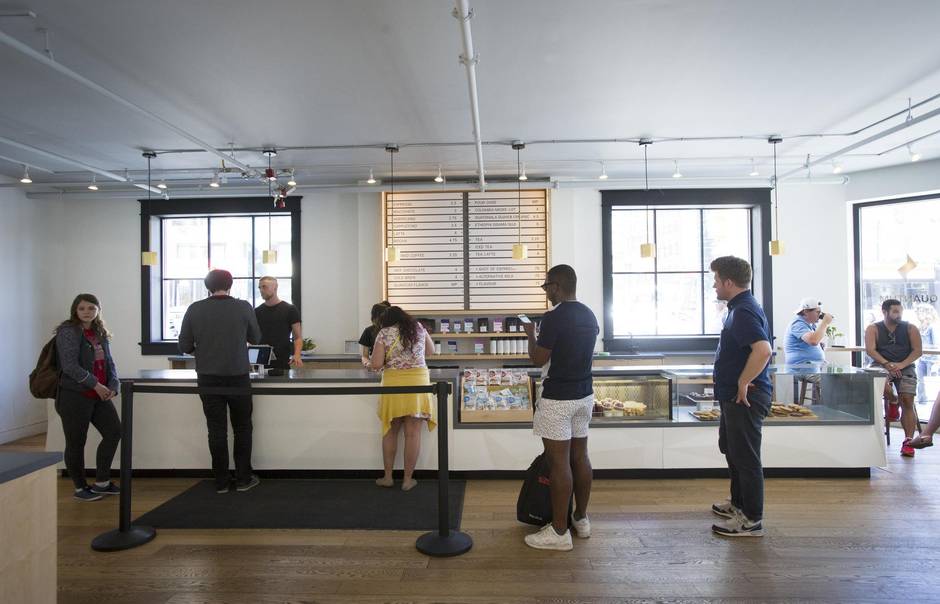 A high-end coffee shop, Quantum Coffee, occupies the front part of the renovated building. (Kevin Van Paassen for The Globe and Mail)

“The big debate is that up until five years ago, we’ve been practising what’s called façadeism, which is basically to keep the façade as a veneer, as a piece of wallpaper,” said Yew-Thong Leong, an architect, associate professor at Ryerson University in Toronto and a preservation specialist.

The renovation of 460 King West is more than merely surface deep. But is it a kind of façadeism-plus? By stripping the building to its bare bones inside and giving it an entirely new life as office and classroom space, has the feel and integrity of the building also been stripped?

Many of the original architectural highlights remain, such as the French Second Empire style of the ornate, protruding top-floor windows. Yet the street level is very different. 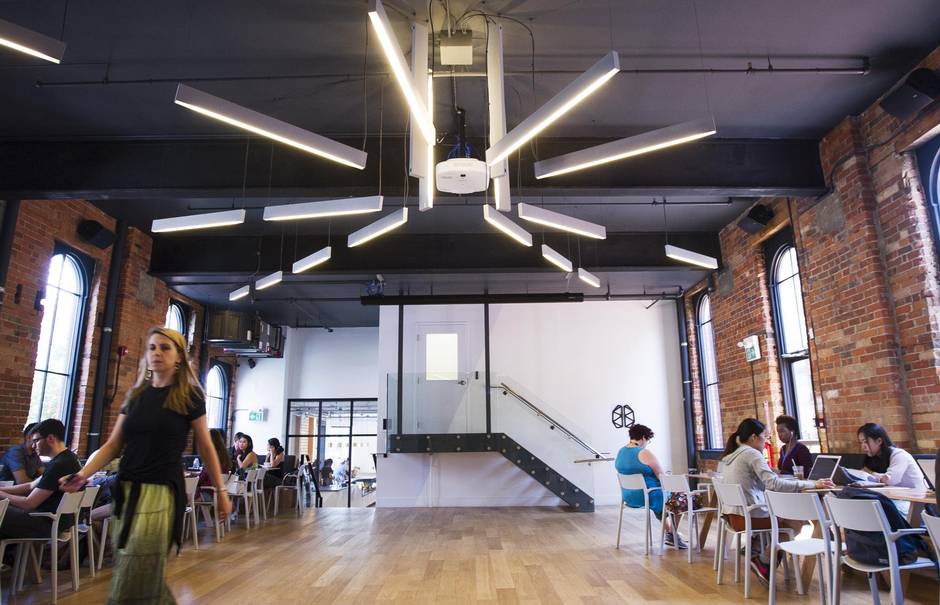 An open space is used by coffee shop customers but doubles as a teaching room for BrainStation events. (Kevin Van Paassen for The Globe and Mail)

The old hotel bar, when it was known as the Cabana Room and after Toronto had started to let its hair down, was by the 1980s “a lot punk, a lot downtown arts scene, a fair bit queer and a whole lot interesting,” said Denise Benson, a DJ and long-time denizen-historian of Toronto’s music clubs.

More recently, the bar was the Departure Lounge, a low-key watering hole outpaced by a neighbourhood fast becoming more upscale and showy. Along that stretch of King, Allied had cultivated a feel to the neighbourhood, taking pains to dissuade some national retailers from opening stores in its King Street buildings, in order to give the street a more urbane feel.

“The way we looked at it, we tried to merchandise the street, the way a shopping centre owner would try to merchandise a shopping centre,” said Michael Emory, president and chief executive officer of Allied. “And the vision that we developed back then, and that we’ve pursued, is that we didn’t want national tenants [on street level]. We didn’t want big national corporate entities. We wanted interesting local tenants. We felt it would create ultimately a richer and economically more successful urban environment.” 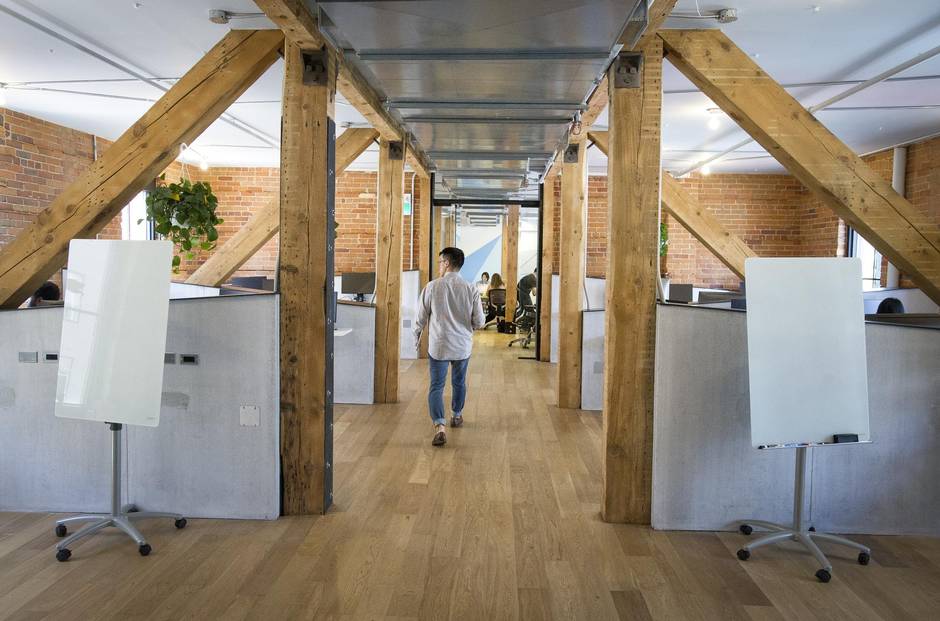 The minimalist design, as shown on the upper floor, is meant to appeal to the younger-demographic BrainStation customers. (Kevin Van Paassen for The Globe and Mail)

So, you have stores such as Soma Chocolatemaker. Patagonia, the outdoor wear store, has an outlet, too, although it somehow fits the street’s feel – the nearby Shoppers Drug Mart, less so. But the new coffee shop seems to be designed precisely to Allied’s tastes (Quantum makes a big deal of its pour-over brewing method), along with the minimalist communal space and outdoor patio.

“They really wanted to create a community,” said Trevor Wallace, principal and founder of Reflect Architecture, which was hired by tech consulting and digital strategy company Konrad Group, which owns BrainStation.

“Konrad bought BrainStation a couple of years go, and they sort of said … we want to find a venue for it that’s going to really enable the users to live a bit of a lifestyle,” Mr. Wallace said. 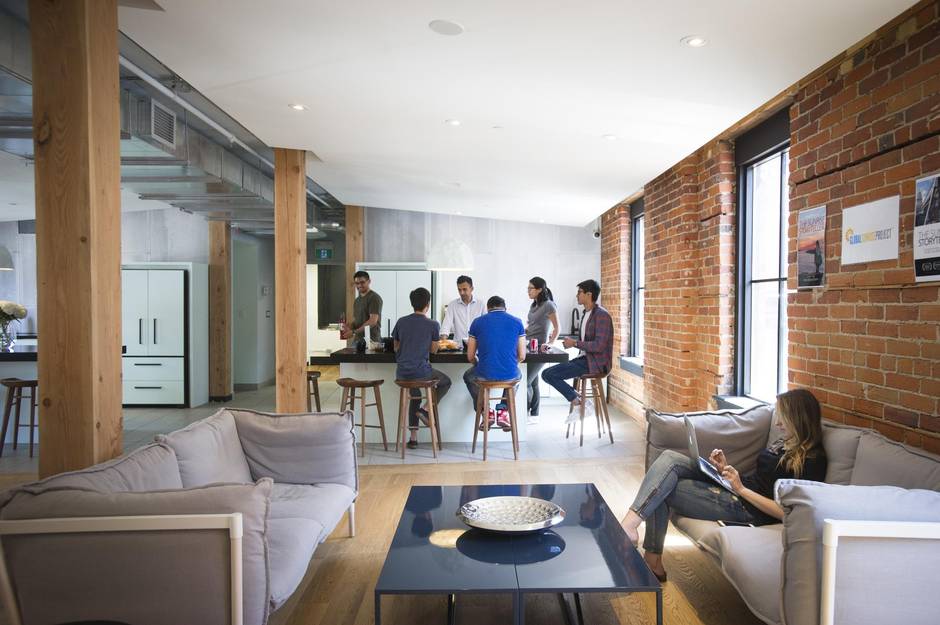 'They really wanted to create a community,' says Trevor Wallace, principal and founder of the architecture firm hired to design the interior. (Kevin Van Paassen for The Globe and Mail)

So, the building, once a draw for travellers and barflies, is now meant as a gathering point for a new lifestyle. “It’s a private space, but once people started to figure out its use, then it actually starts to become a public space,” Mr. Wallace said.

Despite being a young company in a young industry (the company’s three founders are under 30), Konrad Group has nevertheless committed to keeping BrainStation as tenant of 460 King West for 10 to 20 years. Konrad Group also has other offices for its main consulting business close by on King. 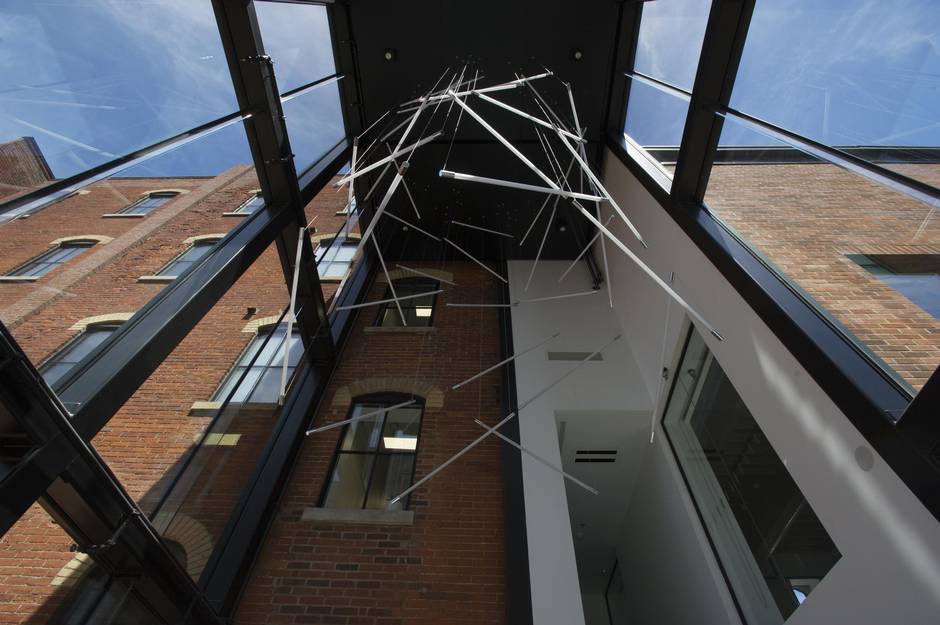 A stylish entryway was among the features Allied added when it renovated 460 King West. (Kevin Van Paassen for The Globe and Mail)

Allied Properties owns adjacent buildings and a parking lot, and it is planning to build new structures in and around 460 King West and neighbouring buildings, like it did on the corner of Peter and Richmond streets, where a new office tower was constructed on top of restored, brick offices. At that site, new glass and steel structures tower over and frame the old brick construction.

Similarly, 460 King West “will be part of a much bigger project, where we preserve the heritage that is worthy of preservation, and then integrate it with new space, like the space that we’re in here,” said Mr. Emory in an interview in the company’s office on the 17th floor of the Peter and Richmond building.

“People are petrified of change, but I think people realize more and more – people that are attracted to the inner city – that change is inevitable, and they almost thrive on it and appreciate it,” Mr. Emory said. “What’s also interesting is that because people are living in the inner city, they are now very attentive to design. They can tolerate a different form, a more monumental structure, especially if the design is good.” 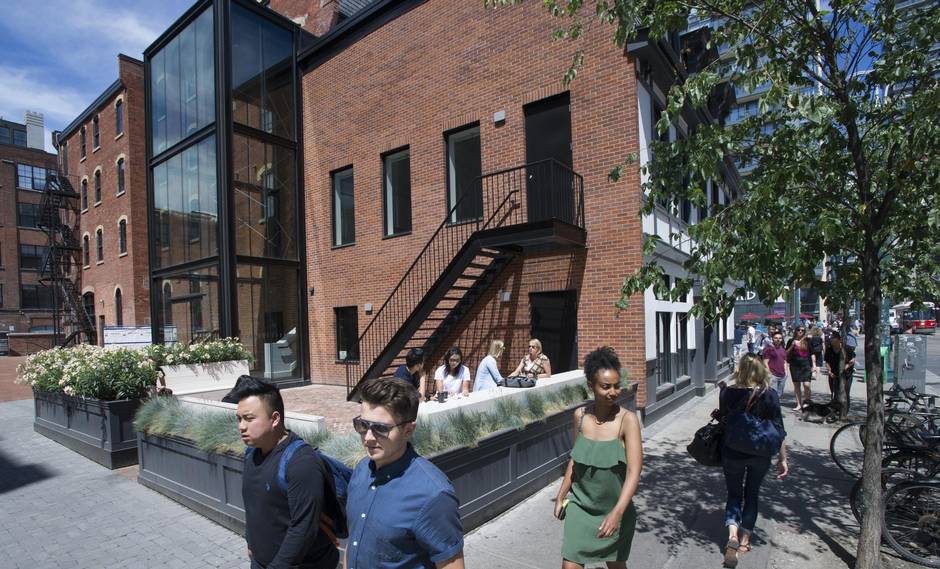 Allied plans to develop the property it owns surrounding 460 King St. W. (Kevin Van Paasen for The Globe and Mail)

Yet for preservation specialists such as Dr. Leong, what remains important is the context of a restoration. The question is whether a preserved building juxtaposed with new structures will or will not preserve the feel of the original building and harmony of the street. How will it further change King Street?

There is no right or wrong answer, Dr. Leong said. “It really depends on the context, the big picture, because the narrative can only come out of the context. You can not tell a story unless you have all the surrounding pieces.”