There was a time when Canada’s largest city wasn’t a cluster of soaring glass towers, when buildings were made of stone masonry and didn’t block out the sunlight.

Toronto wasn’t this country’s biggest city then – that honour fell to Montreal – but as the banking industry and other economic drivers slowly shifted west to the Ontario capital, an eventual surge in population fuelled the need for dense residential solutions. With almost 100 high-rise developments under construction in the city – the most of any North American centre save for New York – that demand is showing no sign of waning.

But in the midst of all the glass-and-steel corridors that have been built, there remain little reminders of the city’s history, and opportunities arise to merge old with new. Some of yesterday’s grand entrances and lobbies, for example, have been retained within modern residential projects. Places like the old Imperial Oil corporate headquarters at Yonge Street and St. Clair Avenue and a former branch of Canadian Imperial Bank of Commerce at Yonge and Queen streets live on with a new surround.

“Any of that is a tangible link to our past, which Toronto has so little of,” says historian Bruce Bell. “Toronto does make it on the list of the top cities of the world, and people think it’s always been like this, but it hasn’t and these old buildings give us an idea not only of what we once looked like but who we were.” 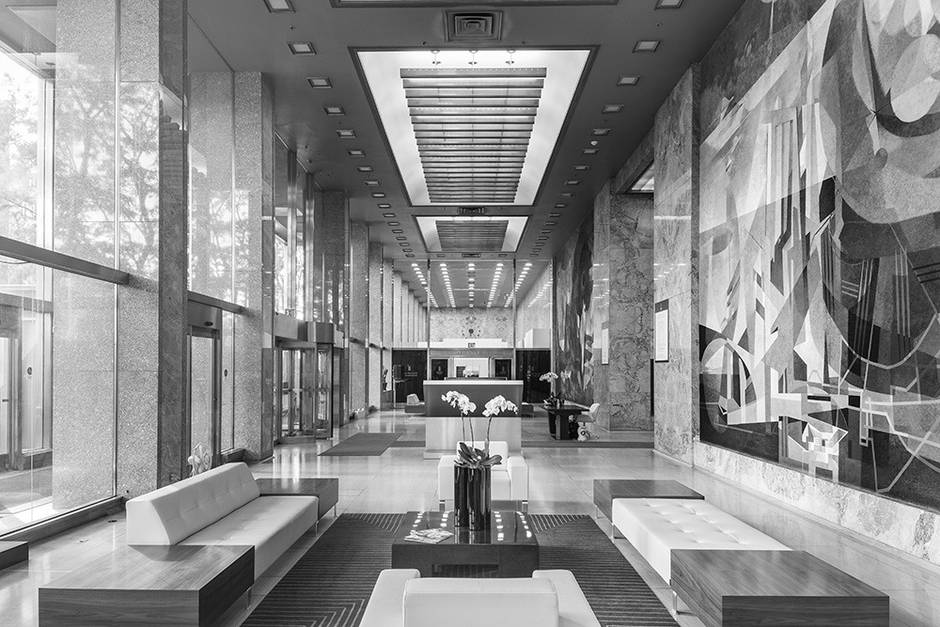 Andrew Pruss, principal at ERA Architects Inc., has a special affinity for history, having worked on both the buildings mentioned above, which are now being converted to the Imperial Plaza and the Massey Tower condominium developments, respectively.

While both are very different buildings from different eras – at 23 storeys, the Imperial Plaza was the city’s tallest building when it opened in 1957, while the four-storey Beaux Arts-style former bank branch dates to 1905 – they will both offer spectacular entranceways to residents. The Massey Tower has an intricate mosaic on the lobby floor – it has been painstakingly removed piece by piece and will be replaced for opening in 2018 – while the Imperial Plaza boasts a large mural in two parts, each measuring 10 by 6.5 metres. It was painted by York Wilson, and Group of Seven artist A.Y. Jackson once called it “the greatest thing of its kind ever done in Canada.”

“For condos there’s an interest in having great public spaces but they’re never this grand,” says Mr. Pruss of the Imperial Plaza development, which also has an LCBO and a Longos grocery store that are accessed from the lobby. “Basically half of the whole ground floor is this double-height lobby so that’s an automatic difference and the murals were commissioned for Imperial Oil.

“They’re called The Story of Oil so they create this kind of grandeur aside from the architecture as well that’s linked to the history of the building and the company.”

The lobby of the Imperial Plaza was also unusual when it was built owing to the amount of glass that was used fronting onto the street, an unconvential feature in the 1950s.

But while those two developments certainly stand out from your typical new-build condominium project, they aren’t the only ones going up in downtown Toronto.

A mixed-use development at Blue Jays Way between King and Wellington streets also has a historic entranceway. The Bisha Hotel and Residences is slated to open at the end of next year, and the facade of the main entrance will be well known to theatre and comedy club-goers in recent years, as it was part of first Second City and then the Diesel Playhouse.

The history of the red-brick, four-storey facade stretches back long before that, though, as it was originally built in 1834 as part of a house for a member of the legislative council of Upper Canada. It’s worn a number of different hats since then, including being a girls’ school between 1878 and 1908, and then the headquarters for the Dr. Barnardo’s Homes charitable organization until 1922. 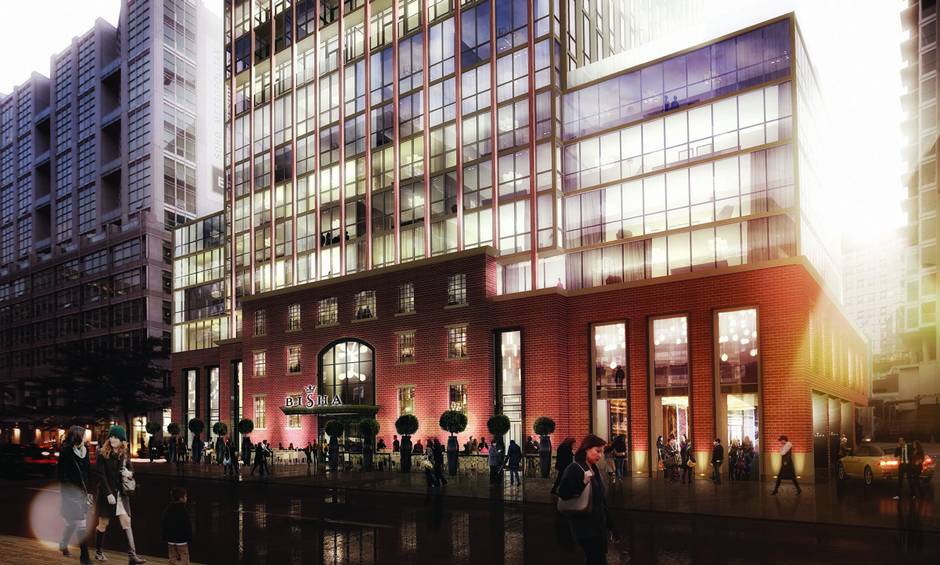 That sense of history was certainly appealing to the developers of Bisha, Lifetime Developments.

“In that sense, people that will be coming to this building will have some sort of connection to it as soon as they walk through the doors.”

For a company that is building a flagship hotel for what it hopes will become a global brand, the importance of having a standout entranceway can’t be underestimated.

“For us, lobbies, whether they be a residential lobby, a commercial lobby or a hotel lobby, they’re very important spaces for our developments,” says Mr. Brown. “They’re really the first expression and the first experience that somebody will have with your brand or your project.” 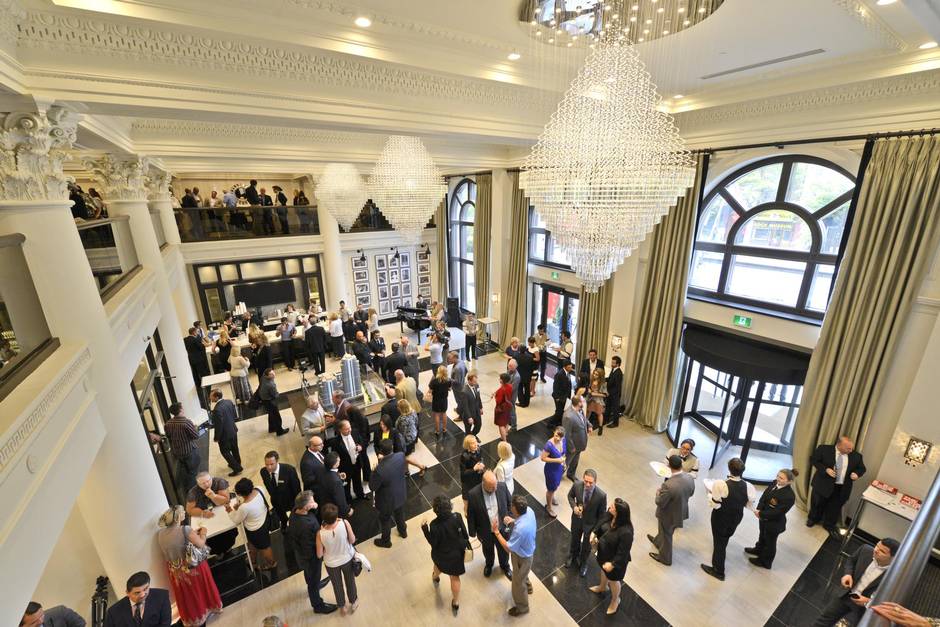 The Royal Connaught's grand details, including railings and three chandeliers, have been recreated in the lobby of a new condo development bearing the same name. (Bob Gundu)

Toronto does not have an Ontario monopoly on bringing the past to life, though. An hour or so to the southwest, the famed Royal Connaught Hotel in Hamilton is the front piece to a condominium development designed by KNY Architects Inc. that will eventually extend to 700 suites.

Built in 1916 on King Street, the former hotel has welcomed such esteemed guests as Louis Armstrong and Pierre Trudeau, so it is no wonder that the lobby, which boasts seven-metre-high ceilings and soaring columns, was designed to make an impression.

But until it was purchased by developers Valery Homes and the Spallacci Group in 2012, it had sat vacant for a decade, save for the pigeons that called it home.

However, the structural integrity of the building is “fantastic,” according to KNY’s Michael Holmes, the project manager, who says that by looking at old pictures of the lobby, a lot of the key elements have been re-created.

The original handrails on the grand circular staircase are there, though the guards have been redone, while the three chandeliers, each consisting of 895 crystals, are new but look similar to the originals.

That sense of authenticity is important, Mr. Holmes says.

“What makes it special is you can’t inject history into a building,” he says.

“It’s something that has to be there and you have to work with it and respect it.”

It’s a tenet echoed by Mr. Bell, the Toronto historian. “I think people who are moving into these condos want it,” he says. “Not everything is about a glass tower with a bland lobby.”