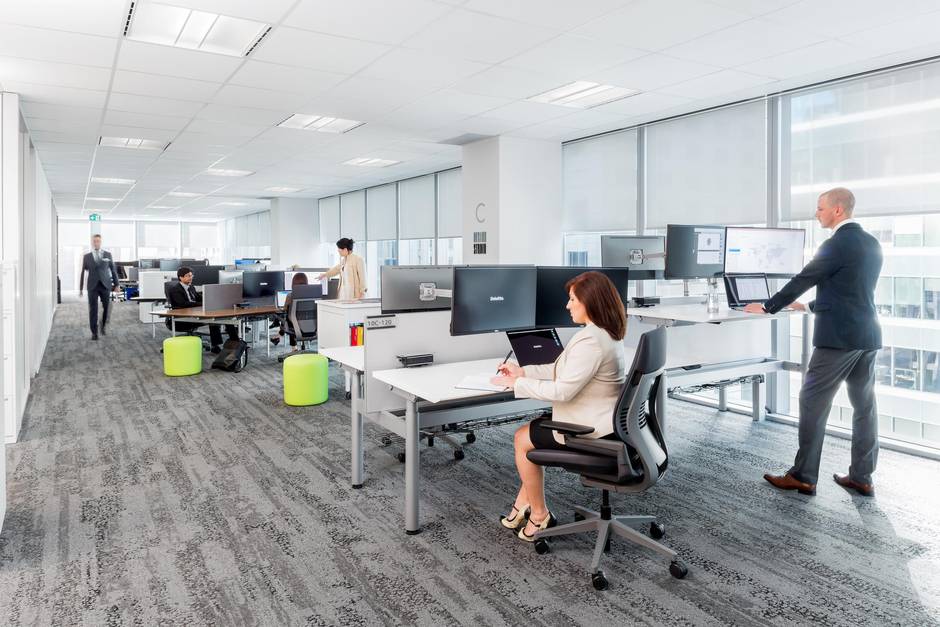 Adam Patchet admits he was “very anxious” when he learned he’d be moving to a new office that has no assigned workspaces.

The senior manager of internal taxation of Deloitte Canada had always worked in offices where employees had desks with their names on plaques and managers got prime locations at a window. “I always had a place that I could say was my space,” he says.

But after getting used to life in Deloitte’s new office tower in Toronto’s core, at Yonge and Adelaide streets, he says he’d never go back to his former work style.

“It’s made me more organized. I do everything on my laptop and phone, and I can find a spot that works well with the kind of work I’m doing each day.”

Mr. Patchet and 4,000 employees of the professional services company in Toronto can choose to set up shop each day anywhere they want, in work areas that range from traditional work pods to treadmill desks to lounge chairs with a view of the street. The office that officially opened the first week of October has a dramatic look based on a philosophy of disrupting routine to encourage collaboration and creativity.

Deloitte started the search for its new home in 2012. Frank Vettese, Deloitte Canada’s managing partner and chief executive officer, decided it was time to bring divisions scattered in seven offices throughout the Toronto area together in one building. 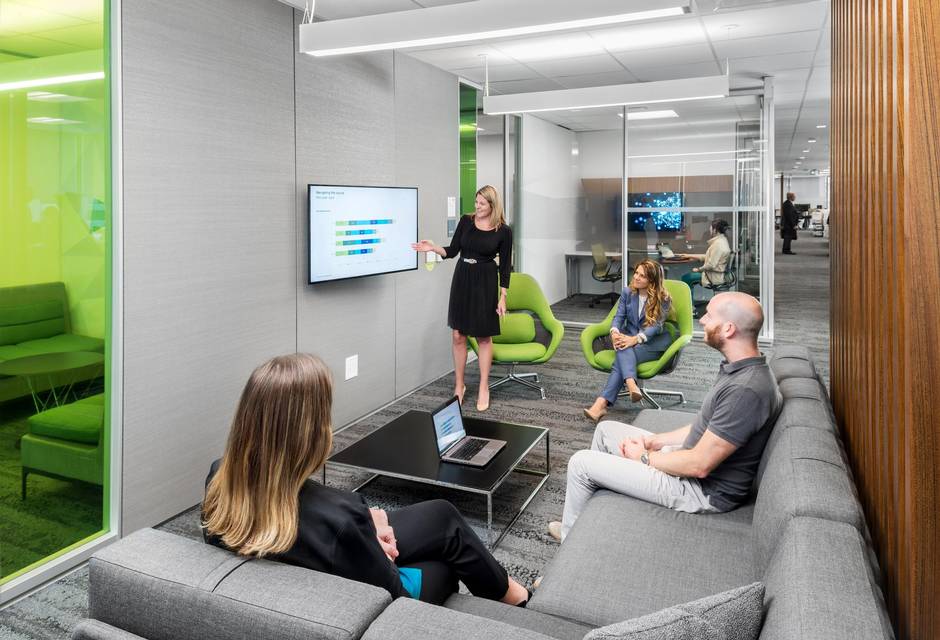 The 4,000 employees of the professional services company have a variety of work spaces – here, a small-gathering office. (Gillian Jackson/Deloitte)

The location search was focused on the city centre, recalls Kerri Cartwright, senior manager of talent for Deloitte Canada. “The key elements were that we wanted a place convenient for employees and clients to reach. It had to be on the underground PATH system and convenient to restaurants and retail.”

At the time, Brookfield Properties was ready to build a 44-storey tower that met all the criteria. “We were intrigued by being able to start from literally the ground up,” Ms. Cartwright says.

Development on the site began as a joint project by Markborough Properties and TrizecHahn Corp. (now Trizec Properties Inc.) that broke ground in 1990, just as the economy was going into a recession and office vacancy rates in Toronto soared to nearly 20 per cent.

Construction was put on hold after just a four-storey underground parking structure and the six-storey stump of an elevator shaft had been built.

In 1998, TrizecHahn revived the plan, but the economy went flat again and work stopped. In 2001, Brookfield bought Trizec’s 50 per cent of the project and the other 50 per cent that was then owned by Canapen Investments Ltd.

The resurgent commercial market prompted Brookfield to plan for three Bay Adelaide towers. A 51-storey West tower was completed in 2009.

Deloitte signed on as the anchor tenant of the second tower, with a 20-year lease on 420,000 square feet, approximately 43 per cent of Bay Adelaide East.

Getting in at the beginning meant Deloitte could customize the interior spaces to meet the company’s goals, says Ryan Brain, Deloitte’s regional managing partner for Toronto. “We wanted spaces that encourage collaboration. In theory, we could make any given floor enclosed or wide open.” And open and bright was the clear choice. 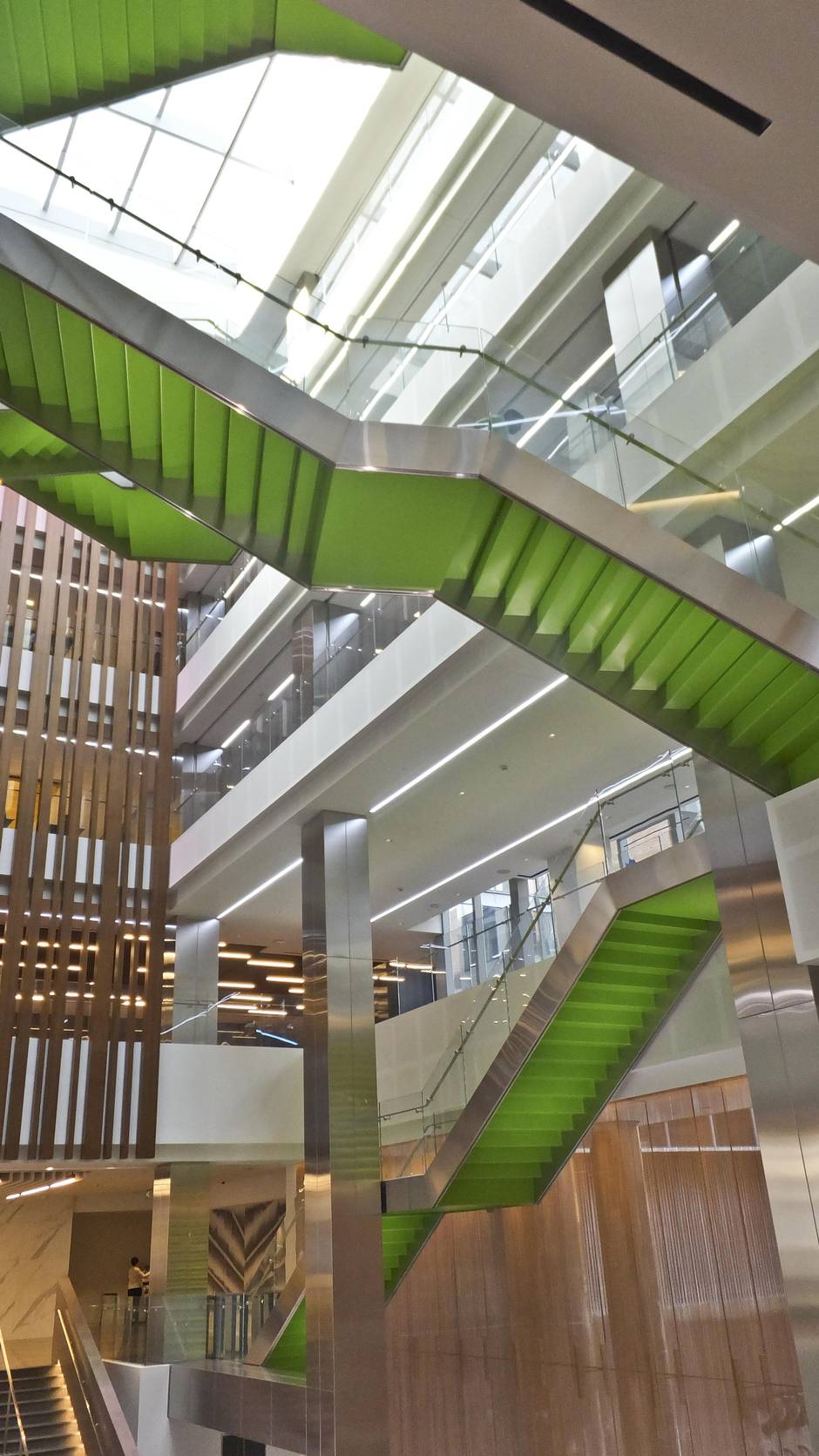 Floors are connected in the wide atrium by a dramatic set of green floating staircases. (Wallace Immen for The Globe and Mail.)

The design firm immediately recommended reimagining the atrium of a six-storey podium to the east of the tower into an iconic space. The initial atrium plan had been smaller, and enclosed. From previous commissions they’ve done for art galleries and hotels, they suggested a much wider opening with floors linked by a dramatic set of floating staircases, says Earle Arney, chief executive officer of AFK.

Another unique feature the architects recommended was an exclusive bistro at the high visibility corner of Adelaide and Yonge. “When you sit there you can see people walk by on the street and say, ‘What is that?’ It’s Deloitte,” says Matthew Kobylar, director of interiors and workplace strategy for AFK. It’s reserved exclusively for Deloitte employees, clients and guests. 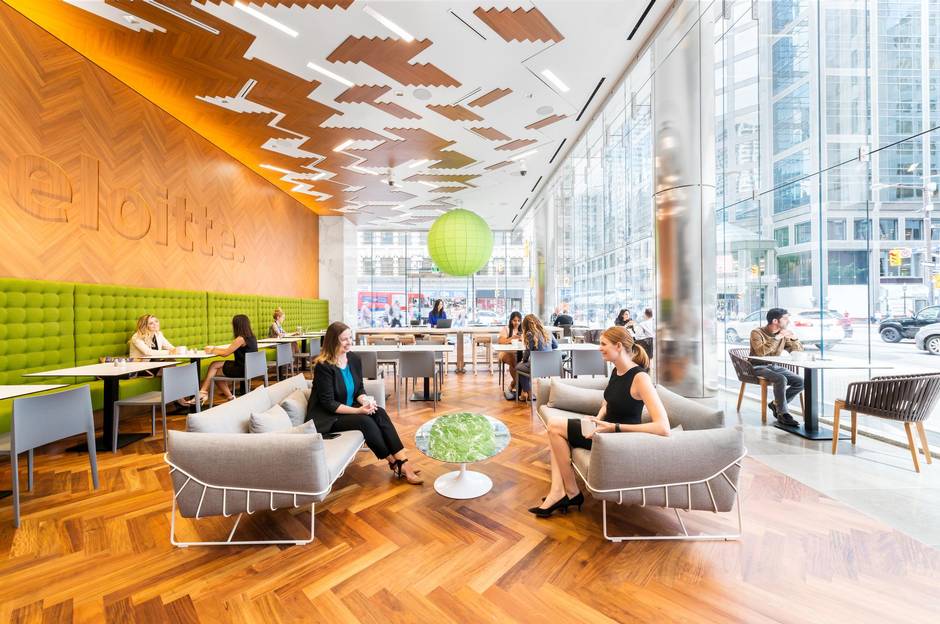 The bistro, for Deloitte employees and guests only, occupies the high-visibility corner at Adelaide and Yonge streets. (Gillian Jackson/Deloitte)

The designers developed a dozen types of work stations on each floor, “from traditional pod stations to treadmill desks, to high-back chairs near the windows for times when you really want to concentrate on a project and don’t want distractions,” Mr. Kobylar said. Collaborative spaces include conference enclosures and a small café on each floor. There’s also a wellness centre with two gyms, quiet rooms and a prayer room.

“The feel is more like a hotel,” Mr. Arney says. His favourite anecdote is from a Deloitte employee who brought her daughter to the office. “She said, ‘Mommy you say you go to work, but this isn’t work work.’ She saw it as something that was much more playful.”

Mr. Brain says the flexibility suits a work force where many employees work remotely and spend time outside the office at client meetings. But an unexpected outcome of such an intriguing space is that there are more employees who want to be in the office every day and many clients who now want to come to the office for meetings.

“There would never likely be a day when we have all 4,000 employees in at the same time, but we would have a seat for all 4,000 if that happened,” he says.

The company has also been expanding faster than anticipated when the project began, but Deloitte has the ability to expand by taking on additional floors of the building. “So, that’s a good problem to have.” 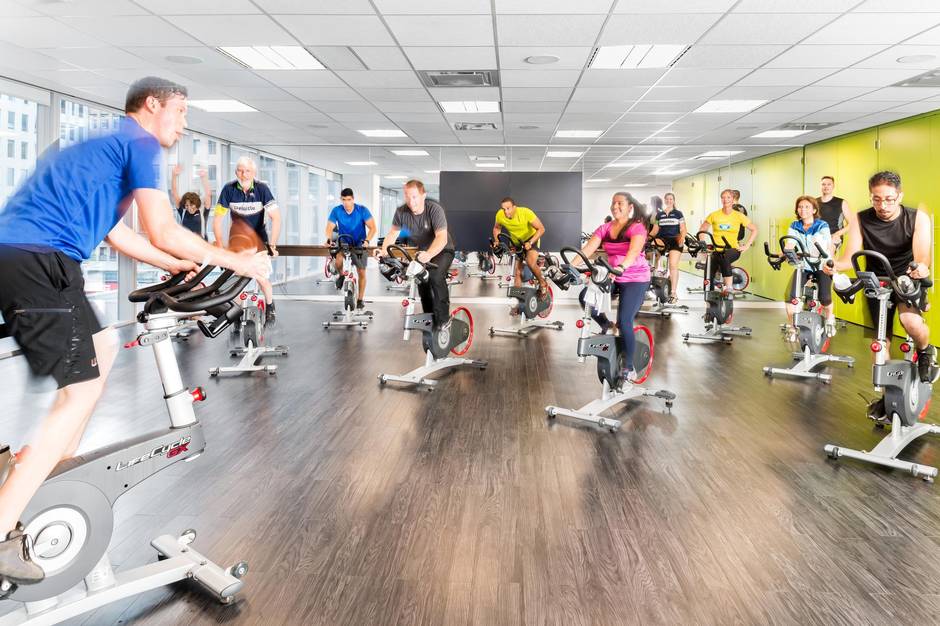 Editor’s note: An earlier version of this article described a design firm as architects. This version has been corrected.