Mackenzie Sharpe was often so busy that his desk became his cafeteria at lunch time.

So he had nagging doubts when his employer, commercial real-estate service company CBRE Ltd., declared a new policy: Food could no longer be eaten in work areas in its offices.

“I was concerned that I’d be distracted if I had to get up and move to a lunch room just to have a nibble,” says Mr. Sharpe, a senior sales associate.

But in the months since the company made the change, he’s grown to appreciate it. “I feel more productive, because I realize when you’re eating at your desk, you’re not necessarily working at full attention to what you’re doing,” Mr. Sharpe says. Most of his work is on portable devices, and he’s found that a change of location and chance conversations with colleagues can actually help focus his thinking. 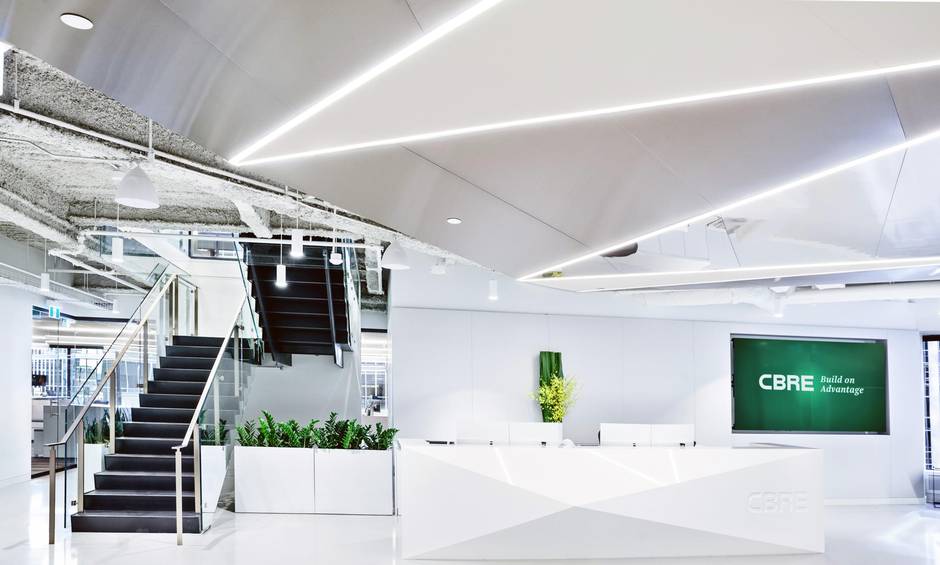 It’s still a novel policy in Canada, but there are practical reasons for declaring desks food-free zones, says Lisa Fulford-Roy, CBRE’s managing director of workplace strategy. “The healthy desk policy is an internal CBRE policy implemented across our offices to encourage our staff to take a break from their desks, connect with colleagues and to promote healthier workstations.

“Eating at your desk causes bacteria through a buildup of food debris and the smells distract colleagues. We want people to take a break from their screens, relax and connect with colleagues in an informal setting. Ultimately, we expect it will help lower stress and increase productivity.”

The new approach also mandates a clean desk policy that asks employees to clear their workstations of paperwork and personal items at the end of each day. “Studies have shown that freeing desks from clutter reduces stress and increases focus. In addition, when not occupied, any individual workstation can easily be used by visiting employees and clients for the day as a hoteling station,” Ms. Fulford-Roy explains.

As part of its move in 2016 to a new head office and downtown Toronto regional office at 145 King St. W., the company registered to be certified by the International WELL Building Institute, which sets measures for building air and water and encourages natural light. Projects earn WELL certification by achieving features in seven categories of building performance – air, water, light, nourishment, fitness, comfort and mind. 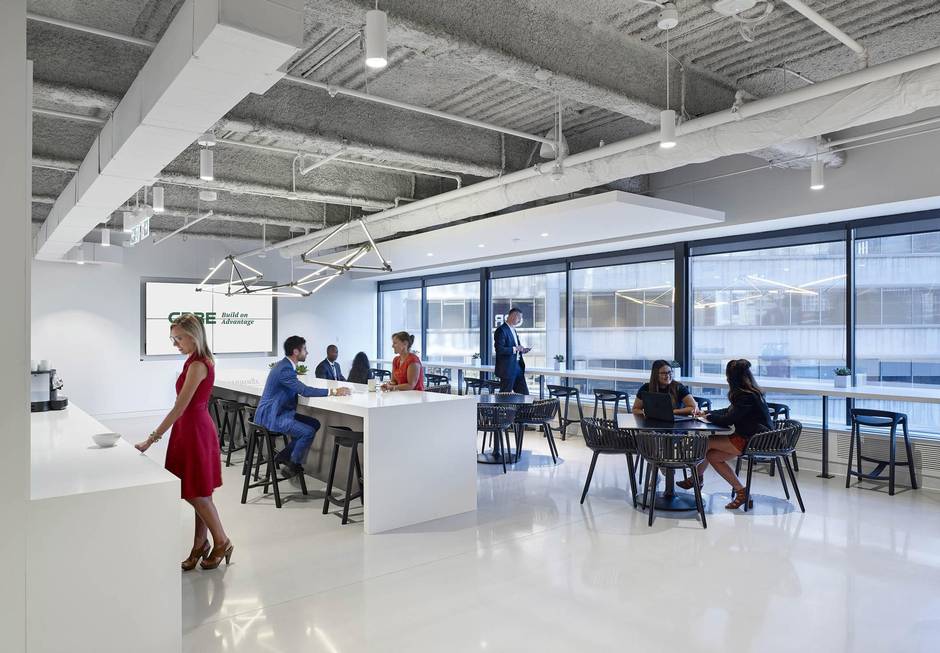 With a ban on eating at desks, CBRE employees congregate in the office's Rise Café. (CBRE)

A spokesperson for the Washington-based institute says CBRE may be the first employer registered with the program to go as far as specifically banning employees from eating at their desks. But the program does require that offices have adequate seating and tables in break rooms to accommodate at least 25 per cent of staff and encourage employees to get up from their desks and socialize.

The Rise Café at CBRE can accommodate as many as 40 of the 160 employees at any one time. While food is not sold at the café, staff are encouraged to bring their own brown bags or carry-out from nearby food courts.

Employees are still permitted to take coffee and tea from the break room back to their desks in their own mugs, and filtered water dispensers are installed throughout the office to discourage plastic bottles. 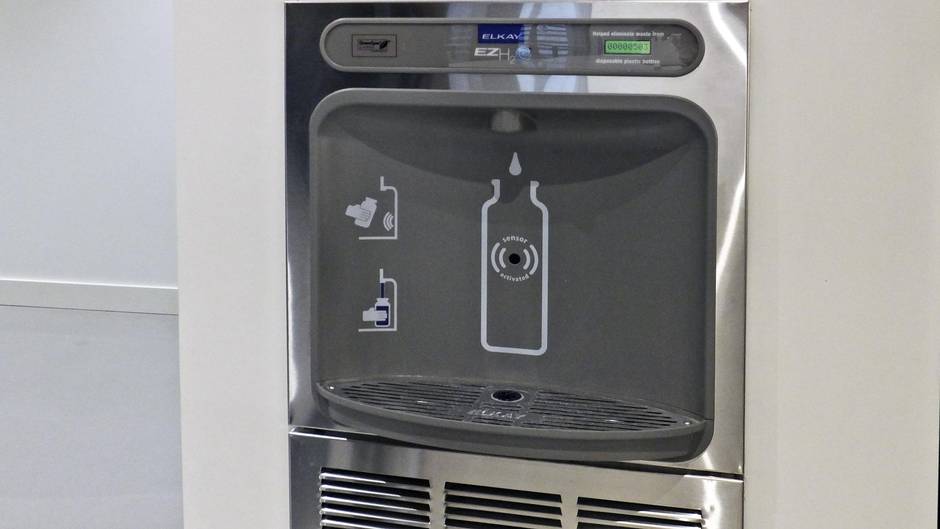 Employees became part of the decision-making process, voting on what was important to them in the new office design, she adds. “The result is our people understand why we have brought in these new policies and that we’re acting with their health and wellness in mind.”

Ensuring employee buy-in is essential, comments John Trougakos, an associate professor in the department of management at University of Toronto at Scarborough, who has done research on the social aspects of employee lunch breaks.

While he hasn’t done any work with a company that has a firm don’t-eat-at-your-desk policy, he has seen companies with an informal norm that people are not to eat at their desks.

But if it’s not their personal choice, employees can end up becoming more fatigued, the research shows. “I can understand the argument that it makes sense to get people away from their desks, but our research has found it has a draining effect if people feel they are forced to socialize with other people and told how to use their personal break time.” 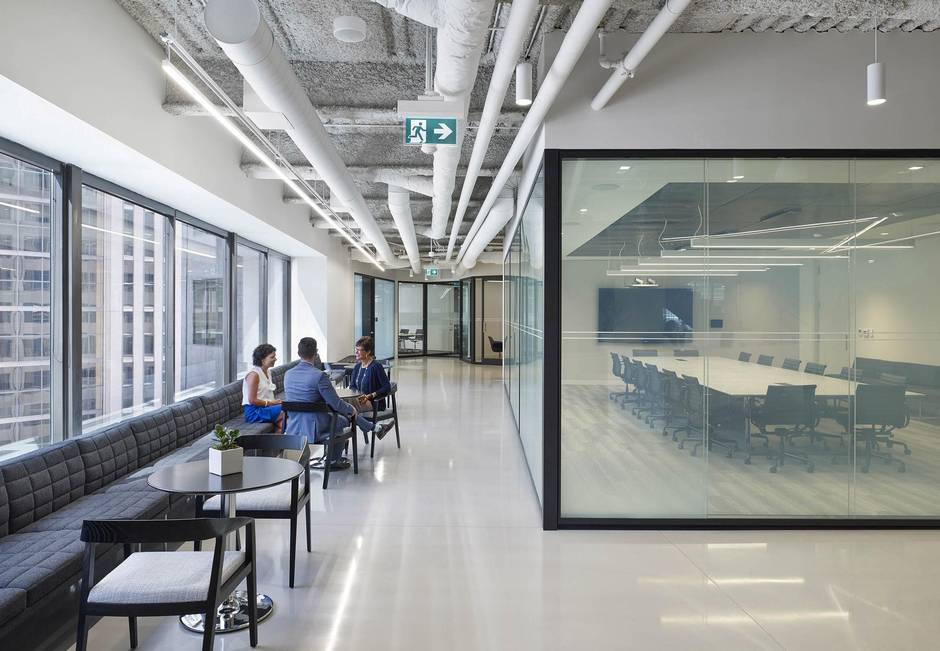 Dr. Trougakos adds: “We suggest companies need to be careful about creating artificial social interactions in the workplace. Because people might not like that.

“We would recommend that employers provide options so that people don’t feel they are forced to go to one place. Give them freedom to do what they want to do during their break and go where they want to go because getting a break is beneficial.”

And that’s the norm at CBRE, Ms. Fulford-Roy said.

“Informally, we have been getting feedback that people appreciate the change.” Follow-up questionnaires are being planned. “It doesn’t feel restrictive because everyone understands what we’ve done is to improve the overall experience of the employees.”

There have been a few cases of employees sneaking snacks at their desk, “but now all it takes is gentle reminders,” she says. 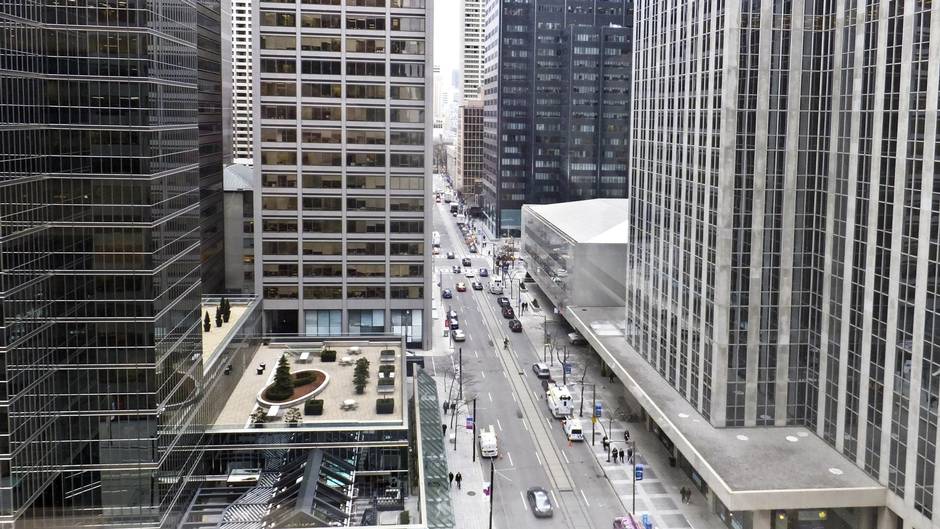 WELL is designed to work harmoniously with LEED and other international green building systems for new and existing commercial buildings.

CBRE has four of the first 10 offices in Canada pending registration for certification – in Vancouver, Toronto West, Toronto North and the downtown Toronto head office.

Among features installed in the new head office to be compliant are:

Desks can be adjusted to stand-up position to reduce sedentary behaviour and alleviate back and shoulder pain.

All employees sit within 7.5 metres of natural light and views and close to a dispenser of fresh filtered water.

Noise cancellation systems are installed through the office to reduce background noise, which studies show is a leading cause of stress and distraction.

The lighting system automatically adjusts to the level of natural light outside, to reduce the impact of lighting on employee sleep-wake cycles.