Real estate developers are not always an altruistic or patient lot, typically looking for maximum returns on their investments right away.

For those who develop brownfields sites – where the soil and water are contaminated by former industrial and commercial uses – such expectations might have to be held in check. Cleaning up environmental messes, obtaining planning approvals, and building on such sites can mean long lead times and substantial costs.

Now provincial incentives, municipal planning enhancements, and trends toward urban intensification are making the redevelopment of such sites pay off, says David Harper, a managing partner with the Kilmer Brownfield Equity Fund, a private investment firm focused on redeveloping brownfields.

Mr. Harper was recently proclaimed Brownfielder of the Year at the 12th annual Canadian Brownfields conference, staged by the Canadian Urban Institute (CUI). Among other winners of CUI Brownie Awards, sponsored by the Canada Mortgage and Housing Corporation, were leaders in sustainable remediation technologies and project development at the neighbourhood scale.

Mr. Harper says that there has been a recent evolution in policy supporting brownfield redevelopment. His company, which started five years ago, has raised more than $93-million from both institutional and private investors, with four projects in different stages and one finished. He says it can take about three years for brownfields to be cleaned up and ready for construction to commence; investors in such situations are not acting as charities but are looking for value.

"You can go good – and do well," explains Mr. Harper, a specialist in environmental risk management. "No one's going to do this because it makes them feel good, that's a reality," he says. "You can make a return if you do it correctly."

Remote brownfields – for example, former mines, oil-fields and industries in outlying areas – are more difficult to address, because "they don't fit the intensification goal," according to Mr. Harper. Some of these derelict sites end up targeted for interim uses, for example becoming brightfields, where solar panels that generate electricity are arrayed across the ground, with a goal of eventually cleaning up the land and putting it to more valuable uses.

Cleaning up brownfields has a multiplying and leveraging effect for communities, Mr. Harper says. "You're redeploying these lands, getting them back into the economy and collecting property taxes; it's a win-win-win."

Brownfield redevelopment is most viable and lucrative in urban centres where property values are highest, services are available and mixed-use development is most desirable. "You're creating vibrant communities that have significant impact," Mr. Harper says.

Lana Sherman recalls the first time she saw The Tannery, a derelict manufacturing plant occupying an entire city block in downtown Kitchener, Ont. At a friend's suggestion, she and Gary Maister, managing directors of Cadan Inc., a development company based in Toronto, drove to the property in 2007 to consider it for possible redevelopment.

"I see amazing things here," Ms. Sherman recalls thinking. Others weren't so sure, given the site's sheer scale and soil contaminated with oil and heavy metals – not to mention an uncertain economy and questionable demand for commercial rental property in Kitchener.

Today, Ms. Sherman's "amazing things" have come to pass, with the refurbished Tannery District more than 90 per cent occupied by an eclectic group of tenants.

The huge complex, which dates to 1853 (when Kitchener was called Berlin) was originally built for industrial uses, including the stretching and finishing of leather. Today, it comprises an astonishing 340,000 square feet (almost 31,600 metres), which Ms. Sherman likens to "the TD Tower lying on its side." Another 30,000 square feet (almost 2,800 metres) of "junk" and add-ons were demolished during the three-year restoration and reconstruction process, she says, which also involved removing soil that had been fouled by former oil tanks and a rail line.

The exposed-brick-and-wood development includes Class A office space, which houses "new-economy" tenants paying premium rents, such as Google and the Digital Media Convergence Centre. Then there's a vast collection of artisans, a boxing studio, music school, coffee shops and more, a mix that Ms. Sherman says gives it character and energy.

"I've always believed that if you have creative people sharing spaces, creativity will flourish," she says, adding that the project has especially drawn technology companies looking to attract employees. "It's the kind of cool place where people want to spend their days."

It was an area at Calgary's heart 100 years ago, bustling with commerce, industry and life, next to two rivers and the fort on which the city was founded.

Yet Calgary grew in a different direction; its oil-and-gas towers, business and residential areas rising to the south and west. What had become known as East Calgary, and the East Village at its core, languished in the last few decades, dirty and derelict, plagued by prostitution and crime, with few services or infrastructure to attract development.

"Calgarians were not kind to the East Village; if anything needed to be dumped, they did it there," says Susan Veres, vice president of marketing and communications for the Calgary Municipal Land Corporation. The organization was started four years ago by the City of Calgary to rejuvenate the sprawling 309-acre East Calgary, known as the Rivers District, with a particular focus on making the 49-acre (almost 20 hectares) East Village, bordered by the Bow and Elbow rivers, into a mixed-use, mid-rise community.

Today, the East Village has been transformed, with an investment of $108-million to reclaim contaminated soils and install flood-control measures, roads, a promenade, services and a storm-water retention system. It's all part of a master plan, Ms. Veres says, that will see continued residential and commercial development over the next 20 years.

Private investors recently announced that they will build some 1,200 new condos in the East Village, Ms. Veres notes, with more development announcements forthcoming.

Much of the infrastructure work has been financed by a "community revitalization levy," Ms. Veres explains. The village is expected to attract $12-billion in development and generate $725-million in property taxes, while total spending on the project is to amount to $252-million. "To grow your base, you need to invest," she says.

Redeveloping brownfields can take years, leaving empty lots surrounded by chain-link fences as the wheels of project development slowly turn. In Vancouver's Davie Village neighbourhood, what could have been a blight left by the demolition of a gas station is instead blooming.

Prima Properties Ltd. will eventually turn the 2,000-square-metre site at the busy intersection of Burrard and Davie streets into a mixed-use residential tower. But in the meantime Prima, together with Hemmera Inc., an environmental consulting firm, have turned the idle land into the Davie Village Community Garden.

The garden is known as an interim land use, says Eric Pringle, vice president of development for Hemmera. The company has been involved in six redevelopments of service stations in the Lower Mainland in the last two years.

Shell decommissioned the Burrard-Davie station when it sold the property to Prima three years ago. Hemmera then oversaw the remediation of the land, which housed both the gas station and a dry cleaner. Finally, clean soil was brought in, garden beds and walkways were constructed and 135 plots were turned over to local gardeners and community groups in the fall of 2008.

Prima gets a 70 per cent tax cut while the land is not in commercial use, Mr. Pringle says, amounting to a whopping $240,000 per year. The company will soon start building its mixed-use high-rise, but in the meantime, the community gains.

"It could have been an empty, fenced lot, which is of no benefit to anyone," he adds. "This is a wonderful alternative." 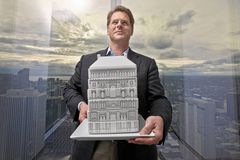 Public-private projects ease the load for cities
October 11, 2011
A downtown pulled back from the brink
October 3, 2011 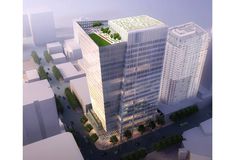 Is Canada getting left behind when it comes to green buildings?
September 19, 2011
Blockbuster’s run ends, but retail property's show goes on
September 12, 2011
Brand-building, one girder at a time
August 29, 2011 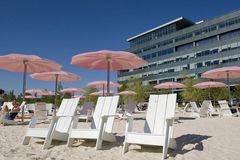