Madeline DeCorso, a business student at the University of Guelph, describes her undergraduate learning experience over the past three years as “disjointed:” classes in one building, career counsellors elsewhere, student-club offices a long hike away and group-study space at a premium in the main campus library.

But this fall, the fourth-year student and her classmates at Guelph’s College of Business and Economics finally have a place to call home. In a $12-million renovation, the Guelph, Ont., school transformed a former women’s residence (Macdonald Hall) into the new headquarters of the college, with the historic building reconfigured for multimedia classrooms, student support services, study spaces, a gathering place for students and a locally-owned fair trade coffee shop.

At Guelph and other Canadian universities, many business schools are getting a makeover, with spaces in and outside the classroom reimagined to fit changes in teaching and learning. Be they renovations, expansions or new buildings, the new-look business schools share common features: flexible classroom design, informal learning spaces and responsiveness to student needs. 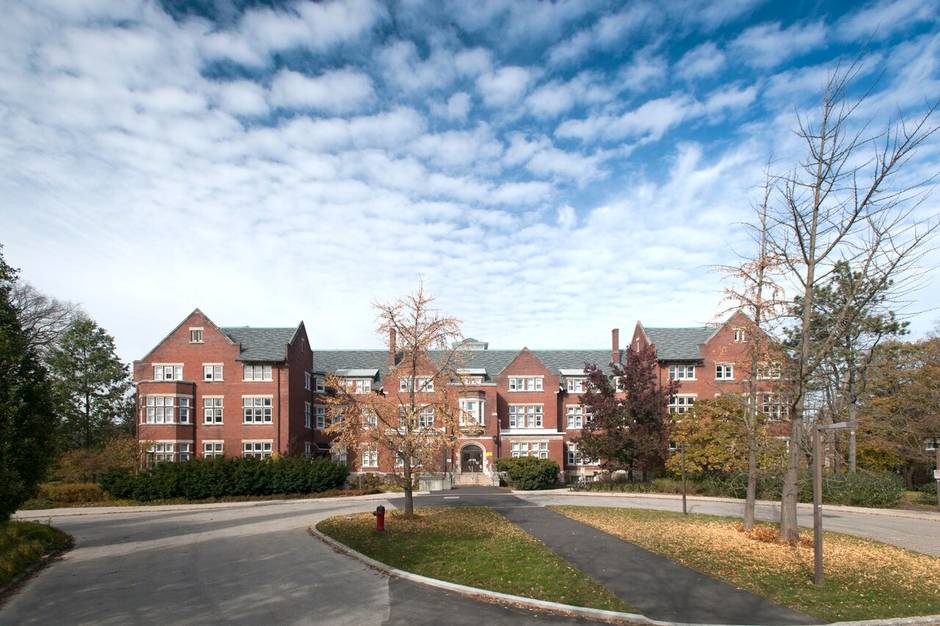 The MacDonald Hall building on the campus of the University of Guelph is now home to the faculty of business and economics. (Dean Palmer)

“There is a feeling the student has become the client,” says Siamak Hariri, a founding partner of Hariri Pontarini Architects, whose firm has won four Canadian and international awards this year for its 2013 design of a new building for Ivey Business School at the University of Western Ontario in London, Ont. “It’s like buying a suit – now it has become bespoke, tailor-made – and you are thinking through all the million ways in which to get it right.”

But he cautions that student-focused design, flexible learning spaces and other attributes of new buildings are just a starting point. “I don’t pooh-pooh that,” says Mr. Hariri, whose firm recently got the nod to design a new building for the Sprott School of Business at Carleton University in Ottawa. “What is hard to get at is what makes the school distinctive and to capture that in a feeling, so you walk in and say, ‘I get it.’”

To that end, design becomes a metaphor for a school’s identity. 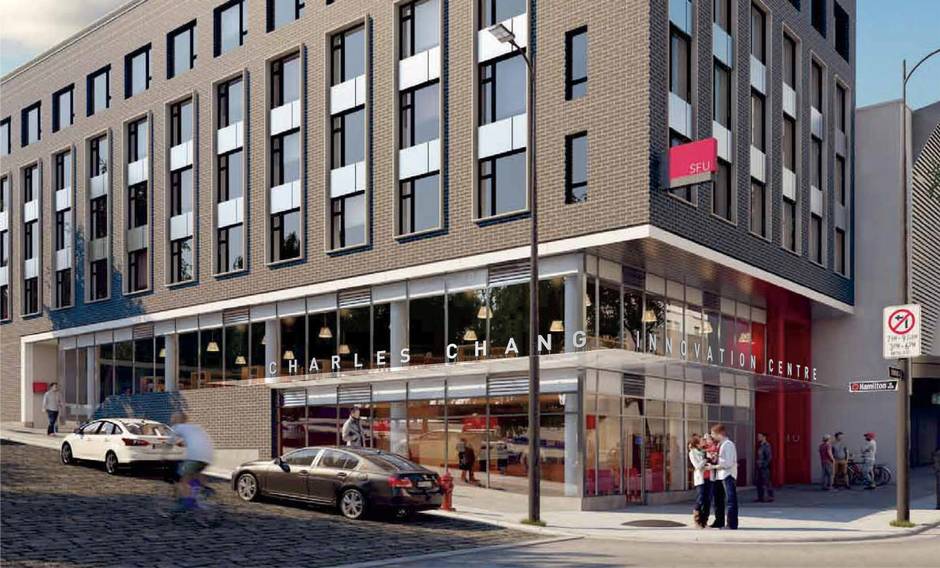 For example, the Beedie School of Business at Simon Fraser University, with an institutional focus on entrepreneurship, recently opened a new building in downtown Vancouver as a graduate student residence, an innovation space for student startups and a ground floor café space for informal collaboration. “We starting thinking of this as a residential building but that became secondary,” says Ray Letkeman, principal of Vancouver-based Raymond Letkeman Architects, whose firm designed the project. “The restaurant and the innovation space is the driver.”

The live-work-study concept, he says, “is a recognition of the importance of thinking of education as not only the instructional element, but the opportunity for spontaneity and the integration of life, and social life [of students].”

At Guelph, where Ms. DeCorso is president of the Business and Economics Student’s Association, she can barely contain her enthusiasm over the new “sense of community” she sees, now that students have access to group-study spaces (instead of lining up at the campus library) and close proximity to professors and college services at Macdonald Hall. 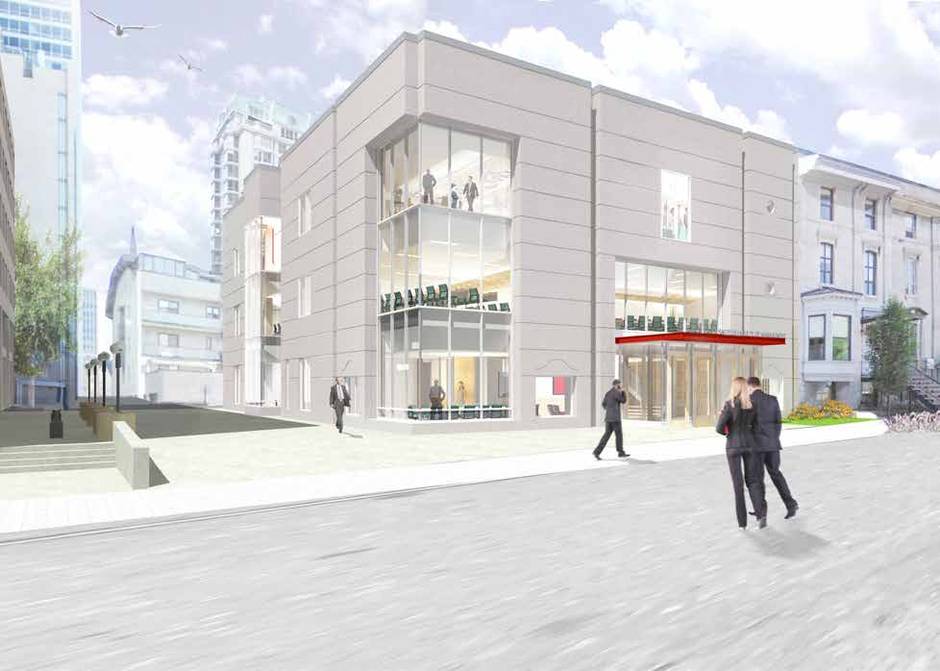 McGill's Desautels, taking over the campus bookstore as part of its major expansion, is trying to give its students a 'home' feeling. (EKM Architecture)

“When you walk into the building you feel that it is designed for students,” says Ms. DeCorso, who is set to graduate next spring.

College dean Julia Christensen Hughes says the “significant consolidation” of school operations was carried out in discussion with students and others, with an eye to learning.

“It [the renovation] provides students with wonderful collaborative professional space in which to do their work, and provides them with easier access to services,” she says. Previously, she adds, “I would come across students sitting on the floor in hallways in the winter or waiting in line to see somebody.”

That student focus underpins a 40,600-square-foot expansion under way at McGill University’s Desautels Faculty of Management in Montreal, taking over space in the former campus bookstore. 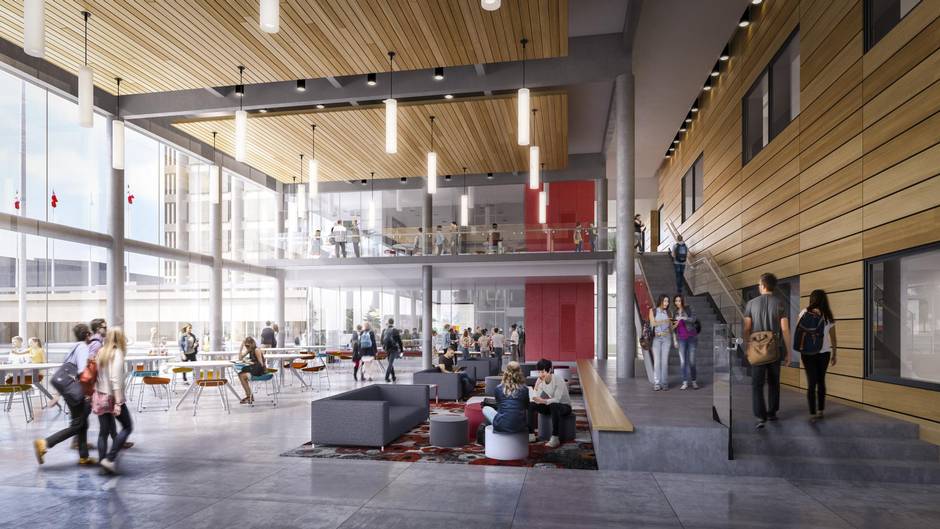 The centrepiece of Goodman's $22-million expansion is a two-storey atrium at the west end of the building, a space an official says that students will 'own.' (Norm Li/+VG Architects)

“What we are trying to do is create a space where the students will feel at home,” says dean Isabelle Bajeux-Besnainou. When the addition is completed in January of 2018, MBA students will have 19 discussion rooms for group projects compared to eight currently, while undergraduates will have 25 study rooms, up from 11.

“We hear a lot of talk about distance learning – it’s a big discussion these days – but in the end a lot of the students want to be there [at school] with their peers and work together,” she says.

Like renewals elsewhere, the Desautels expansion will feature flexible classrooms, with tiered seating (for case teaching) or flat floors with round tables and chairs for group discussions.

But what happens outside the classroom is also important.

At Brock University’s Goodman School of Business in St. Catharines, Ont., a signature feature of its current $22-million expansion is a two-storey atrium at the west end of the building.

“We see this will be the space that the students will own,” says Barry Wright, interim dean of Goodman, with students able to meet informally, plug in their devices and receive information on events and activities from an electronic message board.

“This is where the real, the added learning opportunities, will take place,” he says.

This fall, Wilfrid Laurier University’s Lazaridis School of Business and Economics moved into a new $72.6-million building in Waterloo, Ont., that also houses the department of mathematics.

A first-floor atrium and 1,000-seat auditorium are intended for use by students and those outside the school, says dean Micheál Kelly.

“It is a way to bring the community into the school on a more regular basis than with the facility we had before,” says Dr. Kelly, who sees the 210,000-square-foot building as a profile-raising symbol for the school.

Back at Guelph, Ms. DeCorso recalls she felt so strongly about the renovation that, as a freshman, she made a small donation to the project.

“As a student, I am very happy I am able to enjoy it while I am still here.”