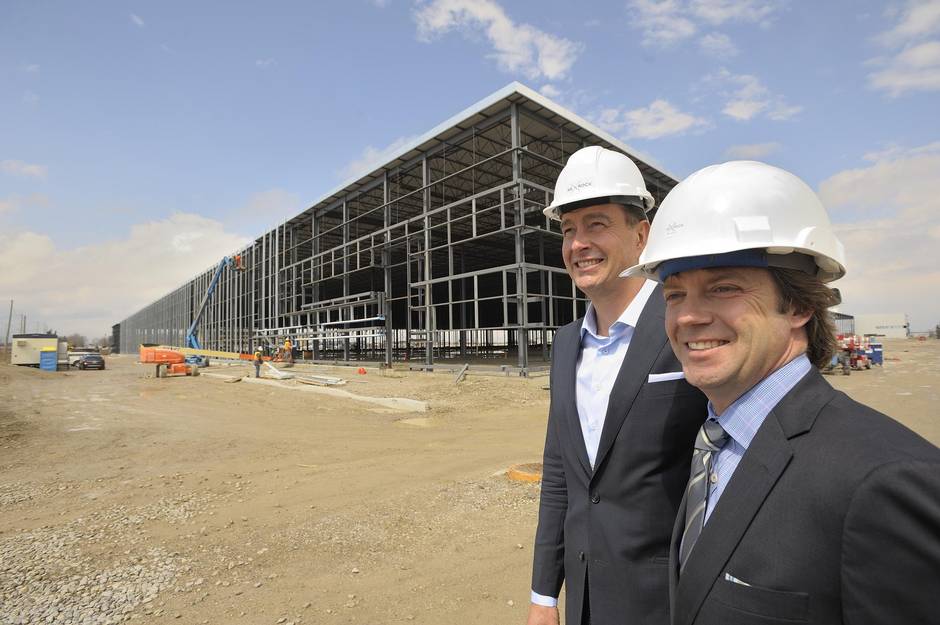 Carttera Private Equities founder Jim Tadeson, left, and partner Dean Cutting at the construction site of a next-generation industrial building in Brampton, Ont., a suburb northwest of Toronto. (J.P. Moczulski for The Globe and Mail)

In densifying urban centres across Canada, taller, more spacious and energy-efficient industrial buildings are replacing those constructed in the 1960s and ’70s.

The renewal caters to a changing economy today ruled more by e-commerce than manufacturing, with demand for large, increasingly scarce, parcels of flat industrial properties close to urban transportation nodes and other amenities.

Typical of the new generation is an almost 900,000-square-foot warehouse under construction by Carttera Private Equities Inc., which in 2013 purchased the sprawling former Zellers distribution centre of Hudson’s Bay Co., in Brampton, a suburb northwest of Toronto.

At this and other large urban properties, developers are building replacement facilities that attract high-quality tenants and qualify for development charge credits.

“We are always on the lookout for large contiguous blocks of industrial land. Those are hard to find even on a Google map."
Carttera partner Dean Cutting

“It’s going to be something we are going to see more of,” predicts Werner Dietl, executive vice-president and managing director of the Toronto West office of CBRE Canada, a commercial real estate firm. “When you look at where the land is available, you are having to stretch further and further afield to put up these large distribution centres. For certain business and transportation models it works … but for other operators it is a big deal to be located closer to the density.”

That is the strategy adopted by Carttera, a boutique developer that acquires and renews infill sites for industrial, office and mixed use, ultimately selling the properties to investors.

Jim Tadeson, who founded Carttera in 2005, correctly anticipated that future development would be shaped by Ontario government legislation introduced that year to limit sprawl in the fast-growing Golden Horseshoe.

“Urban intensification is now part of the lexicon,” he says. “When we started the company it was a new idea.” 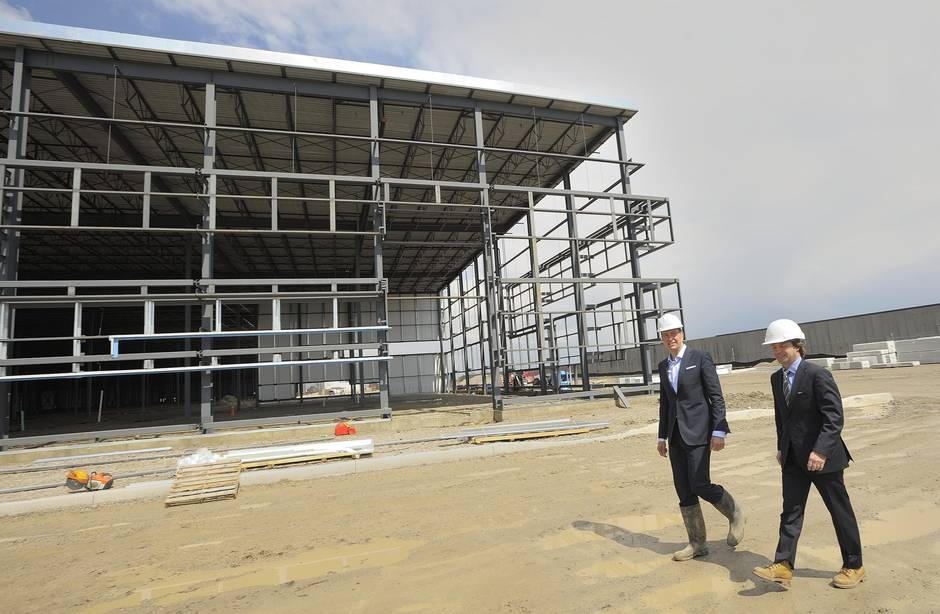 The almost 900,000-square-foot warehouse at Torbram Road will replace a former Zellers distribution centre. The huge footprint, high ceilings and central location are key for new crop of distribution centres. (J.P. Moczulski for The Globe and Mail)

At 38 feet high, the distribution centre is taller than the previous Zellers warehouse, built in 1975 at a ceiling height of just 22 feet. The former building was demolished, partly because its slab foundation was insufficient to support the added height.

The new facility features docking bays on the east and west sides of the building (not just on one side as in older facilities), flexible interior space (with potential for mezzanines) and wide turning spaces for today’s longer trailers.

While the cost of leasing a standard new industrial building in the Toronto region is approximately $6.25 a square foot, Carttera Private Equities is seeking LEED gold status for its property under construction at 8875 Torbram Rd., Brampton, with a proposed leasing cost of $6.75 a square foot.

According to the Canada Green Building Council, of 207 industrial projects registered for some level of LEED certification, 23 are at the gold level and three are at the highest level of platinum.

Suburban Toronto municipalities currently charge between $6.98 and $26.32 a square foot to defray the cost of infrastructure to support industrial property development.

Developers who replace aging industrial buildings with modern facilities are eligible for a credit from the local municipality, since the renewal typically does not require any infrastructure upgrades. The estimated credit for 8875 Torbram Rd. is about $21 a square foot.

“It’s very difficult to get hold of 800,000-900,000 square feet in such a great location,” Mr. Tadeson says. “Most people have to go to Bolton or Milton [Toronto-area suburbs] to get a footprint that big.”

The building is expected to be leased by summer to one, or as many as four, tenants, before its sale to a pension fund or REIT.

Carttera is not alone in modernizing industrial properties.

“Now it is completely functional and at the right height and will cater to 90 per cent of today’s industrial base,” says Orlando vice-president Blair Wolk, whose company develops greenfield and infill sites. “You stand a greater chance of having less vacancy as a result of having the renewed buildings.”

Developers who replace aging structures with modern facilities are eligible for development charge credits from a local municipality.

The credit usually boosts the financial profile of a project, says Peter Garrigan, vice-president of business development at Colliers International. “That is where these types of [infill] deals really start to make sense.”

Adds Orlando’s Mr. Wolk: “It makes a big difference because the DCs [development charges], depending on where you are and which municipality, can be as much as the cost of the land.”

“We are always on the lookout for large contiguous blocks of industrial land,” says Carttera partner Dean Cutting. “Those are hard to find even on a Google map. As soon as we heard about the Zellers sale for Target’s [then-]deployment into Canada, we were on the phone to a couple of brokers.”

Though Carttera’s project is currently the largest speculative industrial building on the market in Canada, its prime location justifies the risk, real estate brokers say.

“There is a definite flight to quality in our market,” says Colliers’ Mr. Garrigan, one of the listing agents for Torbram Road. “We have had tremendous activity in the first quarter of 2015, more active than the entire year of 2014.”

He estimates the installation of LED lighting with motion sensors and a high-efficiency system for heating, ventilation and cooling will save tenants between 50 and 75 cents a square foot. “In our negotiations so far it [LEED status] has been something that has distinguished us from our competition.” 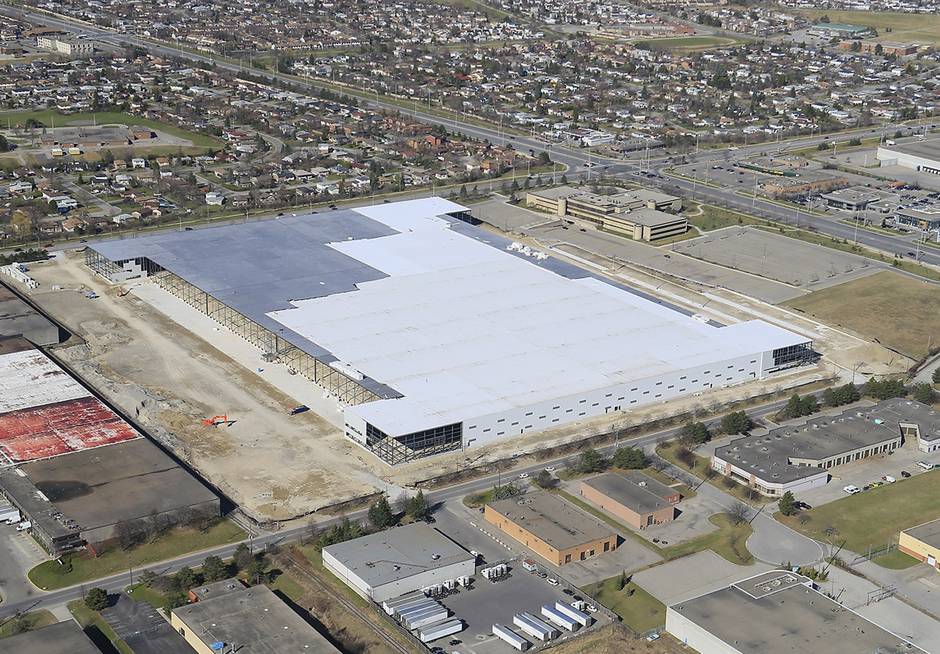 An aerial view of the huge Torbram Road project. The new facility will have docking bays on two sides, not just on one side as in older industrial facilities, flexible interior space and wide turning spaces for today’s longer trailers. (JES Photo/Video)

“In office and industrial asset classes, it has become a lot more important for the tenants as they are making long-term investments in generally large spaces,” he says. “The efficiency achieved through LEED and other energy-efficient initiatives makes a big difference to the operation of the business.”

On a recent visit to Torbram Road, Mr. Tadeson reflected on the evolution of urban intensification over the past decade. “It became for real and we are still here 10 years later.”