A quick scan of Ottawa’s skyline from the west into downtown shows a handful of cookie-cutter office towers, a mix of historical-looking buildings of varying significance, and above them all, a lone Canadian flag on top of the Peace Tower on Parliament Hill.

The skyline of Canada’s capital reflects the nature of the city itself – not that exciting, but a clean and balanced combination of modernity and tradition.

But with Ottawa expanding its light-rail transit (LRT) system to include a 13-stop, 12.5-kilometre segment called the Confederation Line, set to open in 2018, developers are looking at other cities such as Toronto for inspiration for downtown development with access to transit in mind.

And that includes going upward, with building heights not yet seen in the city.

At 900 Albert St., Trinity Station is a three-building complex proposed by Trinity Development Group Inc., whose head office is in Toronto. If approved, the highest of the three buildings, at 59 storeys, would be the tallest in the city. The other two are proposed to be 55 and 50 storeys. 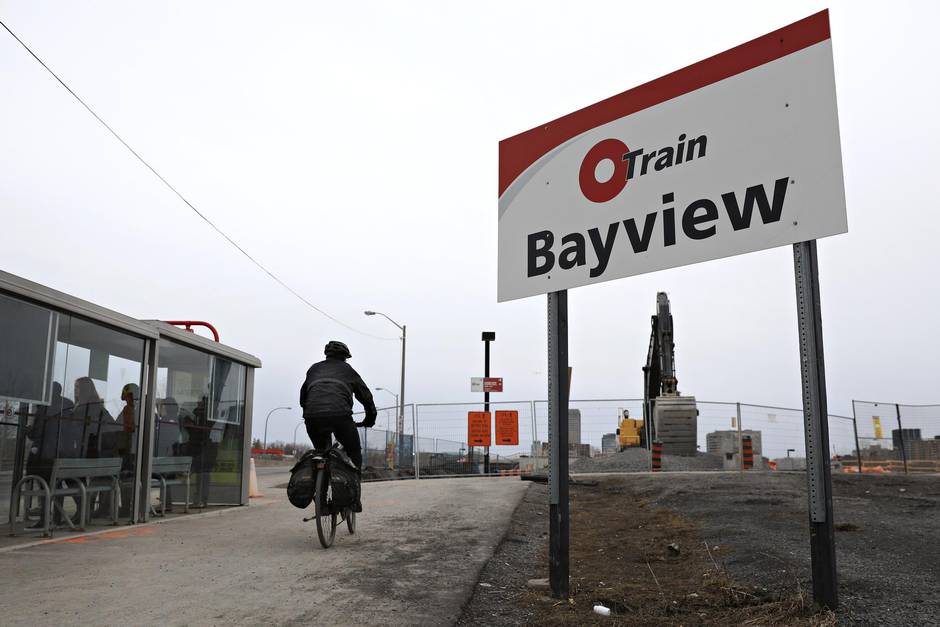 Ottawa is expanding its light-rail transit (LRT) system to include a 13-stop, 12.5-kilometre segment called the Confederation Line. The line's Bayview Station will connect with the Trillium Line. (Blair Gable/The Globe and Mail)

With 1,400 residential units in total in the proposed complex, plus 250,000 square feet of retail and more than 1.3 million square feet of office space, according to the company’s website, the magnitude of the development is new for Canada’s capital.

“It is unique in Ottawa,” agrees city councillor Catherine McKenney of the proposed development, which would be adjacent to Bayview Station, one of the key LRT stops along Ottawa’s new light-rail line and a connecting point to the existing Trillium Line, a five-stop, eight-kilometre line.

According to Ms. McKenney, though, there are still questions that need to be answered.

“I always maintain that height is neither good nor bad, but it’s what height does on the ground,” she explains. “You can have a shorter building that’s denser and blocks out a lot of the skyline and adds shadow, but these are taller buildings. There still is a concern about the 55- and 59-storey buildings as they are significantly higher than what our community design plans for. We don’t have enough information right now.”

Simon Deiaco, who works at the City of Ottawa as a planner and in development review for urban services, is the lead on the Trinity Station project from a city perspective. He confirms that nothing has been approved yet, as the project is still in the public consultation period. 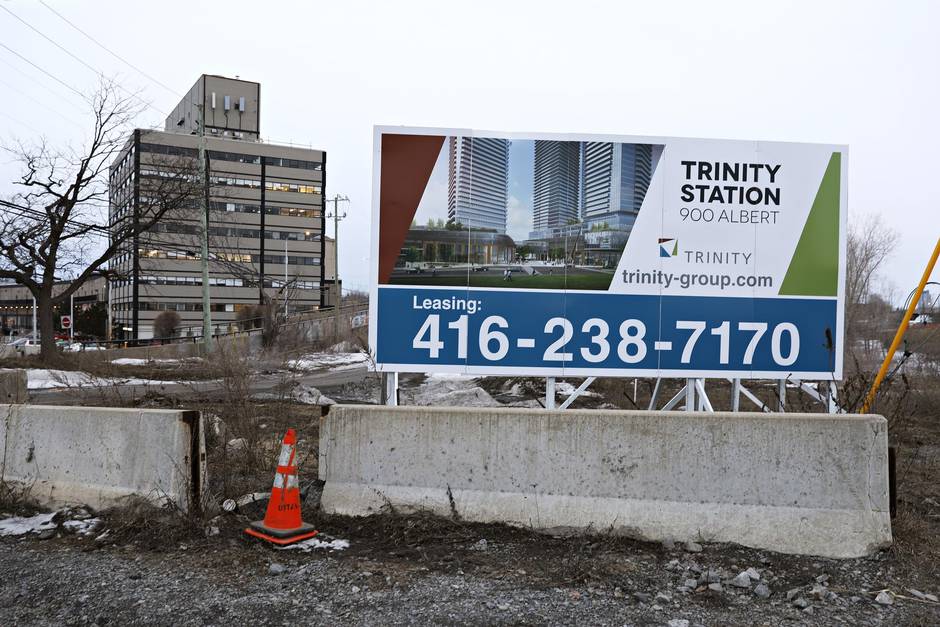 “It’s an attractive site,” Mr. Deiaco states of the area. “There were a couple of recent examples [of other proposals] getting into that 50-plus-storey range, but it is newer for Ottawa. That height is certainly coming to Ottawa, but it takes a long time to get 50 storeys off the ground.”

The area is adjacent to the City Centre complex, home to art galleries, shops and restaurants. It is across the street from the Canadian War Museum and close to the annual RBC Bluesfest concert festival site. The Ottawa River pathway is a few minutes’ walk away, and there is a continuing – and robust – discussion about the Ottawa Senators’ National Hockey League franchise moving into a new arena located within shouting distance of the proposed Trinity Station development.

The development is also at the cusp of Ottawa’s hottest housing market. According to a recent report from the Ottawa Citizen, average prices for single-family homes in the Hintonburg-West Centre neighbourhood (minutes from the Trinity Station site) increased 26.9 per cent over the past five years – the most of any in the city.

Ryan Moore, a senior development manager for Trinity, explains the connection of the development to the transit hub would be comparable to what exists in Toronto, where offices and condos are built in proximity to the city’s underground PATH system and the Toronto Transit Commission’s network of subways, streetcars and buses.

Brad Caco, when he was Trinity’s vice-president of development and design, told the Ottawa Citizen last year he envisages the area around the Albert Street site to sprout like the neighbourhood at Toronto’s Yonge Street and Eglinton Avenue, where the population increased by 33 per cent in 10 years. (Mr. Caco has since left Trinity.) There are more than 20 projects with nearly 9,000 condo units under proposal or under construction in that area, according to City of Toronto data. 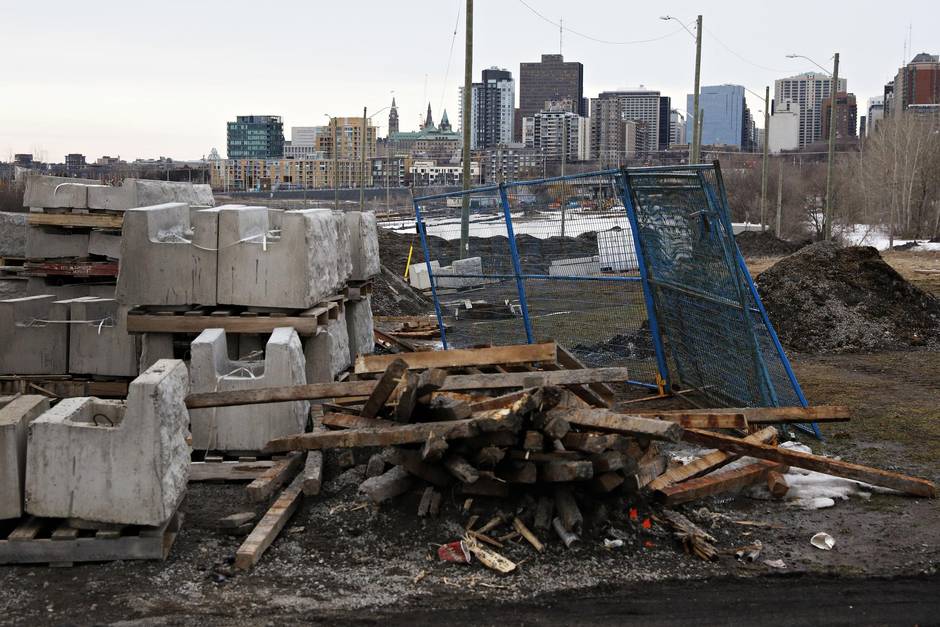 The proposed Trinity development 'has the potential to transform that part of the city, and link a couple of neighbourhoods that have never really been that close geographically,' says city councilor Catherine McKenney. (Blair Gable/The Globe and Mail)

However, during a public consultation meeting in Ottawa last December, local residents were concerned for what the behemoth buildings could do to their neighbourhood.

According to the Ottawa Business Journal, one resident advised Trinity that she wanted a balance of intensification and the overhauling of the existing neighbourhood, which drew applause. There were also concerns about the design, excessive parking and traffic congestion.

Mr. Moore was impressed with the engagement of the residents, calling them “sophisticated” and “knowledgeable.”

“It’s not really sticker shock to them that a mixed-use high-rise is going up next to a transit station. They’re experienced enough to know what that entails,” Mr. Moore says.

“They had some great comments, and we hope to respond to those questions in the next stage of the process. The comments that they’ve generated are to make sure there is a signature tower design. They want significant architecture treatment, and that’s warranted given the proximity to the transit station. We’re looking at that.”

Mr. Moore says the new development is about giving people choice, as the transit system will give Ottawa residents new access to downtown and its surrounding neighbourhoods.

“Put people’s houses on the transit station and let them choose. The idea is that they don’t necessarily require a car to exist in this location,” he explains. “There is some concern about the height and we’re working on that. But this is the right location for this type of destination.”

The Trinity Station development is one of many in the works as Ottawa goes through a transit evolution, and live-work-play concepts are now being integrated next to major transit stations across the city.

“People are very interested in this development,” says Ms. McKenney on city council. “It has the potential to transform that part of the city, and link a couple of neighbourhoods that have never really been that close geographically.”