With the flick of a switch, Niagara Falls lights up at night three times brighter than at any time in history. Programmable colours can make the tumbling water look like a golden sunset, an ocean wave in multiple shades of blue or an intensely red lava flow.

New technology and innovative thinking that solved a century’s worth of technical challenges brought the American and Canadian Falls to brilliant light last December, in time for the holiday season and new year.

“It’s bright, controllable and durable. No other source in the history of lighting has had all these things together,” says Paul Boken, vice-president of Toronto-based Mulvey & Banani Lighting (a division of Mulvey & Banani International Inc.), which did the design for the Falls’ relighting. 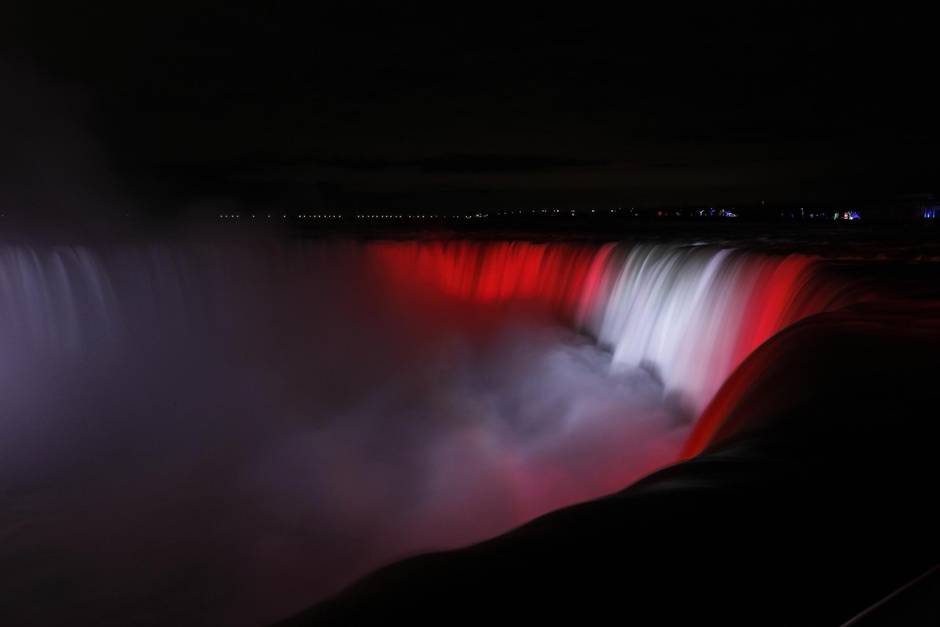 Millions of colour combinations can be created at Canada’s Horseshoe Falls, although just two are required for patriotic displays. ( Light Monkey Photography)

Replacing the previous xenon gas lamps with LEDs makes the lighting from three to 14 times brighter, depending on the colours used, and illuminates the falling water more evenly than ever before. The new lights also use 60 per cent less energy and are expected to have a maintenance-free life span of at least 25 years. The old lamps had a 1,900-hour life.

Lighting the Falls was a lot tougher in the past. The first permanent installation in 1925 used 24 arc lights whose carbon filaments had to be adjusted every 15 minutes they were lit. Spotlights that replaced them in 1958 added colour, but the lamps ran so hot their tinted filters had to be regularly rotated to prevent singeing and had to be serviced nightly.

In the early 1970s, a system using xenon gas lamps was installed that left parts of the cascade unlit. Those lights were reaching the end of their life when the Niagara Falls Illumination Board put out a call in 2014 for bids for a replacement system that could for the first time light the entire Falls without dark spots. 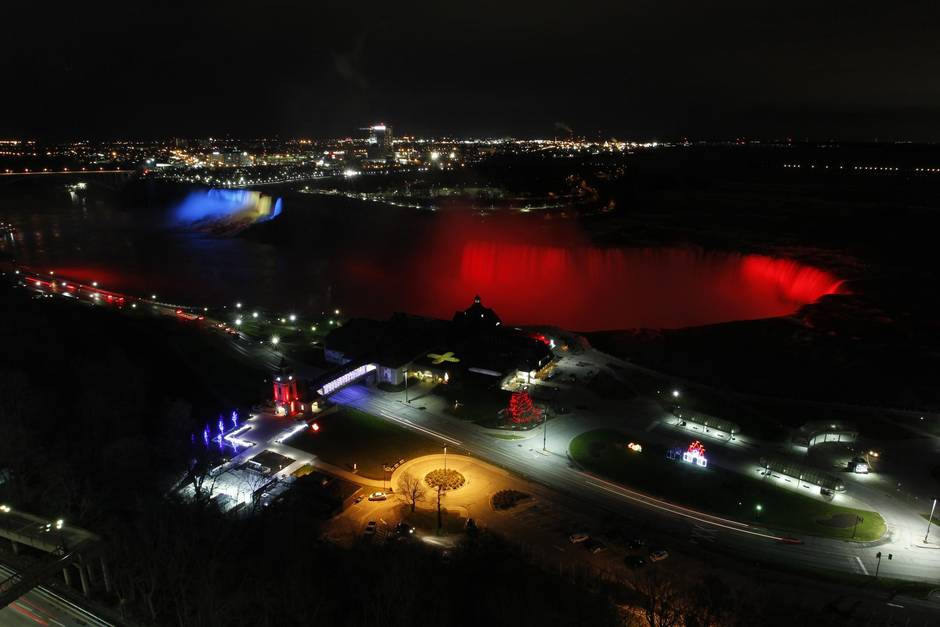 Costs of the $4-million lighting project were shared by American and Canadian interests. (Light Monkey Photography)

The $4-million project, the cost of which was split by Canadian and U.S. entities, was a fortuitous opportunity to use a high-intensity LED system made by Stanley Electric Co. Ltd., one of the world’s largest manufacturers of LED modules, says Nick Puopolo, principal of Toronto-based architectural lighting agency Salex Inc., who spearheaded the Niagara installation project. (Based in Tokyo, Stanley’s North American office is in Irvine, Calif.)

Because the technology is so new, it took a lot of ingenuity, trial and error and teamwork to perfect the intensity and sweep of the lighting, Mr. Puopolo says. The engineering and installation team, which included experts from St. Catharines, Ont.-based Ecco Electric Ltd. and Guelph, Ont.-based Scenework, used Google maps to plot the precise distances from the lights to the falling water. They tested the intensity of various configurations using LED arrays that were aimed at light meters at the other end of an airport runway.

The designers came up with a system that can rotate and adjust lights to blend colours and change their intensities. The result is like a video projection with thousands of potential variations. The lamps themselves are weatherproof and stay relatively cool, even when running at full brightness.

“What we learned from this is already lending itself to ideas for illuminating other public buildings,” Mr. Puopolo says. Salex is doing a project to relight a hotel in Las Vegas. “The existing metal halide fixtures lighting the hotel have been a maintenance nightmare, so we’re doing a mockup to replace them with LEDs. They can be set all around the building for spot lighting or arrayed together to provide broad sweeps of light.” 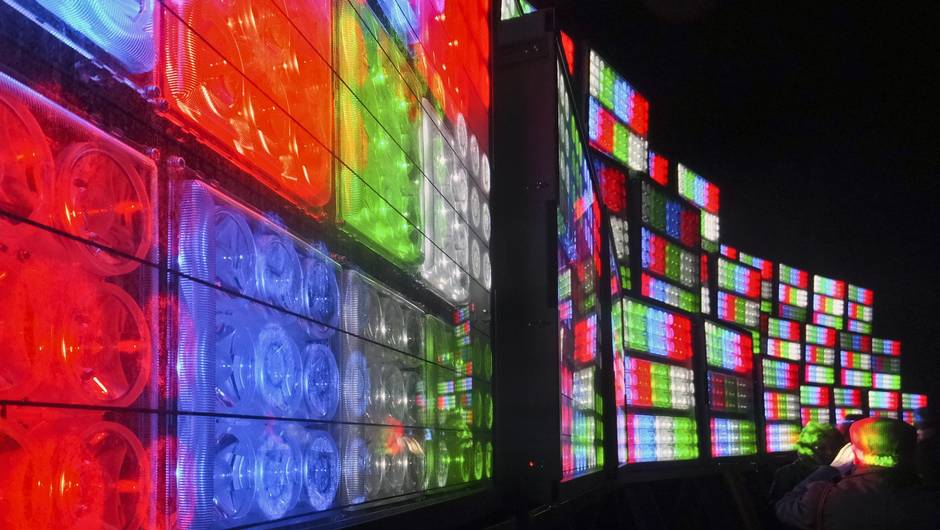 When all the lights are on at full illumination, the light turns to white. Dimming or turning off some colours allows colours to be blended into countless variations. (Wallace Immen/The Globe and Mail)

The ability to precisely direct LED lights also led Mulvey & Banani to use them in creating an innovative display on Toronto’s iconic Bloor Street viaduct over the Don Valley. The LEDs are small enough that they don’t add bulk to the decorative veil of fine wires on the historic bridge, Mr. Boken says. “They’re controllable, so each is like a pixel in a television display. We can have up to 30,000 channels of control on the bridge that are all controlled by a single computer.”

That led the designers to come up with a unique touch. The computer is connected to sensors that get their cues from changes in the weather to create an ever-morphing light show.

“We’ve been able to program colours for a long time, but it always involved a lot of equipment and a lot of maintenance. With LEDs the costs and complexity have gone down significantly so that now the ability to control individual fixtures is the norm,” notes Andrew Mackinnon, principal designer and owner of Gabriel Mackinnon Lighting Design in Ottawa.

“We’re seeing LEDs used to make building and environmental lighting much more dynamic and kinetic. There’s not a lot of reason to limit ourselves to a single experience. That’s a big change,” Mr. Mackinnon says. 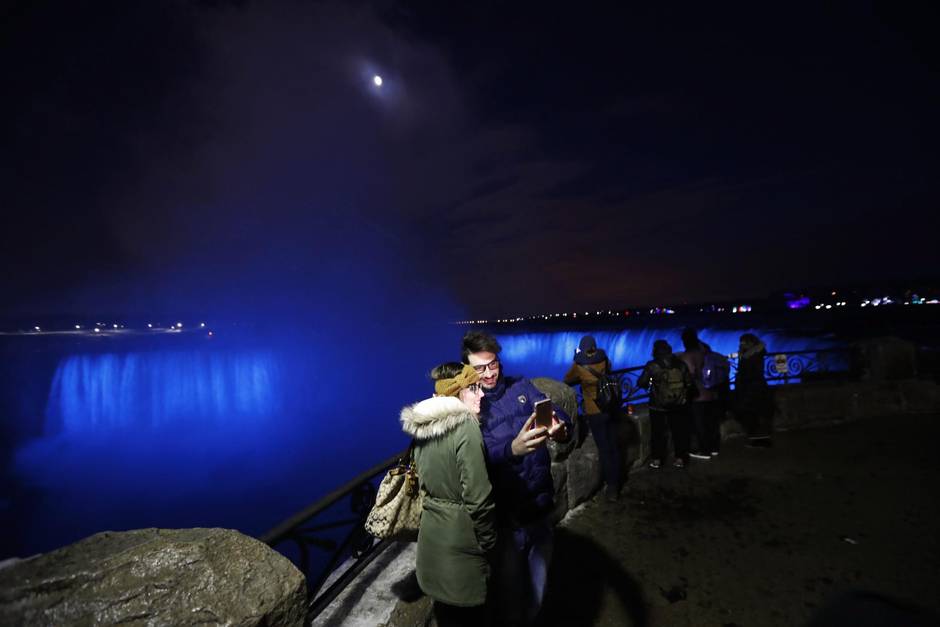 The Mackinnon team is doing a project in the Middle East for a high-rise building with LEDs embedded in each panel of the glass curtain wall, that act like pixels in a giant video display for ever-changing light effects. This approach is already being used extensively in new high-rise construction in Asia.

Control of where light shines is another advantage of LEDs for lighting public spaces, Mr. Mackinnon says. Their design for lighting the new Vimy Memorial Bridge in Ottawa had to avoid shining light on the heritage-protected Rideau River and surrounding neighbourhoods. The project used LEDs in standard roadway lighting fixtures with custom-designed stainless steel light shields to direct the light.

Small fixtures can be powerful, and that was an advantage for another Mackinnon project that relit Edmonton’s Centennial Plaza near the heritage Alberta Legislature building.

In a project along with Toronto’s Moriyama & Teshima Architects, they integrated LEDs in a series of poles, each with 96 fixtures. The result is an even light across the plaza that illuminates formerly dark areas but doesn’t detract from the view of the Legislature.

“To do that in the past would have required tall poles with lights arrayed on racks, like you see at stadiums. That would have been unsightly,” Mr. Mackinnon says.

“LEDs are destined to take over for new large-scale lighting designs,” he predicts. 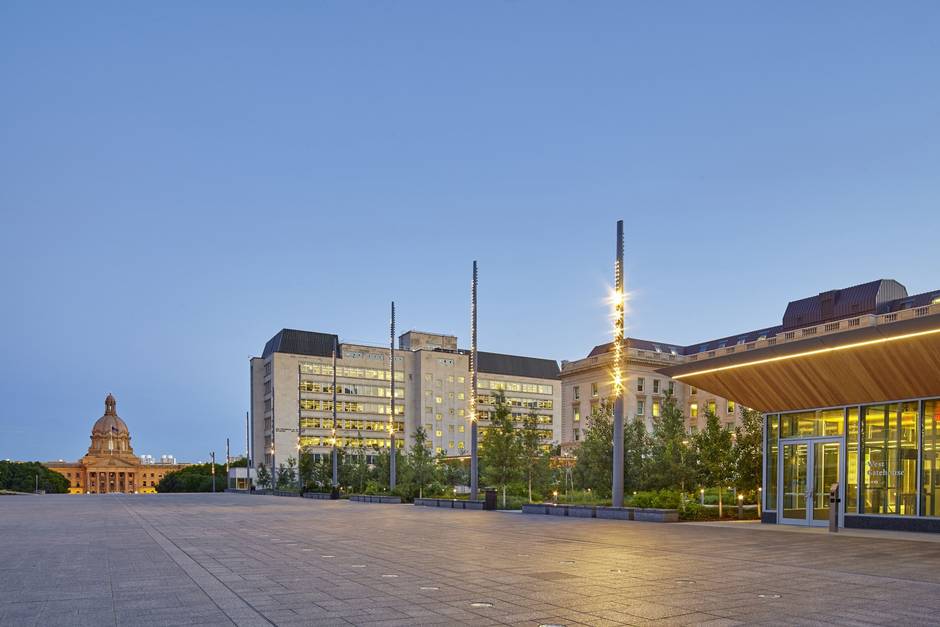 LEDs were integrated in a series of poles at Centennial Plaza in Edmonton, providing an even light across the plaza. (Gabriel Mackinnon Lighting Design)

In the Niagara Falls lighting project, each light-emitting diode chip is ¼ of an inch square in a weatherproof housing about the size of a light bulb.

There are a total of 12,600 individual LEDs in the installation.

They are arranged in 1,400 three-by-three squares of the same colour, in larger clusters of four-by-three of white, red, blue and green LEDs.

The original system had spotlights illuminating 21 areas of the Falls: 10 across the American Falls and 11 across the Canadian Falls.

The new LED lighting system allows adjustment of each of 350 clusters of light, illuminating 120 areas across the American Falls and 230 across the Canadian Falls.

With each array equipped with red, green, blue and white LEDs that can be controlled individually, there is a potential to produce up to 16,777,000 different colour combinations.