Just east of Montreal's Pierre Elliott Trudeau International Airport, real estate company Bentall Kennedy is building its first speculative industrial project in the city in years. The 216,000-square-foot facility isn't scheduled to open until next summer, but with Montreal's industrial market undersupplied in the midst of an economic boom, potential tenants are already lining up to occupy the space.

"We've had a lot of traction on it," said Roberto Giglio, vice-president of leasing for Bentall Kennedy's Quebec division. "This is one of these buildings that we feel is going to be leased even before we complete it."

Speculative building traditionally plays a far smaller part in Montreal's industrial real estate market than in cities such as Toronto, Vancouver or Calgary. But with the third quarter of 2017 seeing 15-year-low availability rates, and demand booming from the logistics and aerospace sectors, Montreal landlords are beginning to develop their remaining parcels of land on spec – "a trend unseen in many years," according to CBRE Group Inc.'s third-quarter research.

"It's clearly a landlord's market," said Avi Krispine, managing director for CBRE's Quebec operations. Companies "used to be able to take four, five, six months to decide whether they're going to go ahead with their project or not, in terms of leasing. Today … good luck if you have a couple of weeks."

Across the country, industrial continues to be one of the best performing commercial real-estate asset classes. The national average net asking rental rate was up 7.2 per cent year-over-year in the third quarter, and availability across the county reached a 16-year low of 4.3 per cent.

Toronto and Vancouver continue to lead the country in terms of low vacancy, at 2.3 and 2.6 per cent, respectively. But Montreal's market is tightening, with almost 2.2 million square feet of absorption in the third quarter alone – more than Vancouver and almost as much as Toronto.

In fact, Montreal and Calgary saw almost half of Canada's net absorption of industrial real estate in the third quarter.

In Montreal, this was led by large aerospace and logistics leases by companies such as Avior Integrated Products Inc. and Syncreon International Group. Smaller companies are likewise demanding space, as business confidence in the province's economy continues to soar.

"On the whole island of Montreal, there are five spaces of 100,000 feet or more," said Mr. Giglio. "The vacancy rate for buildings over 24-foot [clearance height] is something like 2.5 per cent, and that's in the entire Greater Montreal."

Adding to this is a decline in older industrial stock.

With Montreal leading North America in terms of growth in technology jobs – 18 per cent over the past year, according to CBRE – tech companies are transforming high-ceilinged, exposed-brick industrial space into offices, said Mr. Krispine.

A different scenario is playing out in Calgary, the other standout performer in the third quarter (beyond the usual suspects, Vancouver and Toronto).

At 8.5 per cent, industrial vacancy remains high in Calgary, three years after the oil price drop sent Alberta's economy reeling. But things are beginning to look up, with nearly 1.2 million feet of space being absorbed in the third quarter, and speculative development is likewise returning to the market.

Bentall Kennedy, in partnership with Highfield Development, is developing Calgary's first industrial building on spec since 2015. The 420,000-square-foot building, with 36-foot clearance height, will open next summer in Balzac, an area just outside Calgary that's home to a number of major distribution centres for companies such as Wal-Mart and Sobeys. Amazon also recently announced a 600,000-square-foot fulfillment centre in the area.

"The fact that we were able to sell such a substantial, in some respects risky, development really speaks to what the insiders in this market already know, which is we're going to be out of supply very quickly," said Iain Ferguson, executive vice-president for industrial and logistics at CBRE Canada.

Demand for Calgary's industrial space is being driven partly by a return of capital expenditure to the Alberta oil patch and associated investment in manufacturing. More than this, however, is a continuing effort by companies to consolidate their Western Canadian distribution networks, treating Calgary as a kind of "inland port," said Mr. Ferguson.

With Amazon and other e-commerce giants changing consumer expectations, companies are having to raise their logistics games. That means increased demand for large, high-tech industrial buildings in transportation hubs like Calgary.

"It's going to be very expensive for everybody to chase Amazon down the rabbit hole," said Mr. Ferguson.

"In a lot of cases, [competitors will need] bigger warehouses, more investment in SAP systems and infrastructure and material handling. It's definitely a take-a-deep-breath moment for a lot of people in the market." 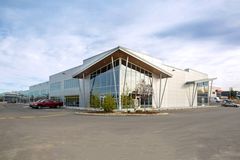